The Good Doctor‘s Shaun was an absolute wreck at the close of Monday’s fall finale — and it was Lea, not Carly, who was there to embrace him in his time of need.

In “Friends and Family,” Lea and Glassman accompanied Shaun on a trip to visit his estranged, ailing father Ethan (Battlestar Galactica vet Michael Trucco) and eventually chose to forgive him for his myriad shortcomings. But in their last interaction, a seemingly remorseful Ethan showed his true colors when he lashed out at Shaun and blamed him for Steve’s death.

Shaun’s reunion with his mother (Kingdom‘s Joanna Going) proved less traumatic. Marcie couldn’t defend her decision to stand by her abusive, alcoholic husband and let her two sons fend for themselves, but she was able to at least explain to Shaun the choices that she made, and their exchange at the diner ended with a hug.

Meanwhile, back in San Jose, Claire finally addressed her mental health. Towards the end of the hour, she booked an appointment with a therapist to begin working through the issues she’d been trying to avoid in the wake of Breeze’s tragic demise.

Below, series boss David Shore weighs in on Shaun’s parents, the state of his relationships with Lea and Carly, and what the rest of Season 3 — which resumes on Monday, Jan. 13 — holds for Shaun and Claire. 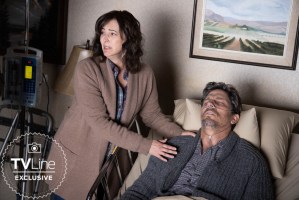 TVLINE | Why was it important to have Shaun face his parents at this point in the series’ run?
From the beginning, we have talked about Shaun’s relationship with his parents… He has certainly cut them off, [but] none of us can truly cut ourselves off from the past. The past is part of us, and that’s what we wanted to explore here.

TVLINE | Ethan was always painted as a villain. Yet in new flashbacks, it seemed as though he was at least trying, to the best of his ability, to be a good parent. Why was it important to show this other side of him?
It would be easy to just portray Ethan as a monster, but we didn’t want to do that. We wanted to portray a real human being who was in way over his head. That doesn’t mean that we sympathize with him. He is a bad guy. He has done bad things. He has made horrible mistakes with his son, and he has been a terrible father, but he is still a human being who may regret what he has done… That’s more interesting, and more realistic, and more of a challenge for Shaun to deal with.

TVLINE | Ethan was at first contrite when Shaun returned to the house. Father and son agreed to let go of their anger, before Ethan acknowledged just how smart Shaun was. Then he went and ruined the moment when he referred to Shaun as a “weak, spoiled little baby,” and blamed him for Steve’s death. Was that outburst a result of morphine-induced delirium, or was that how he really felt about Shaun?
I think what he said to Shaun the first time is true, and what he said to Shaun the second time is also true. 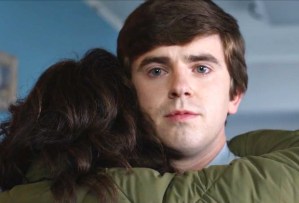 TVLINE | Is Shaun and Marcie’s discussion at the diner meant to provide closure? Or is there potential to revisit that relationship somewhere down the road?
There’s potential to revisit his relationship with his mom, absolutely. I think “closure” is a term that doesn’t mean as much as we want it to mean. It is certainly a wonderful moment between Shaun and his mother. It gives him an opportunity to get answers from her that he hasn’t gotten before, and on some level, accept her answers and her mistakes. It’s a form of closure, but things are never that simple.

TVLINE | Before they left for Wyoming, Lea and Glassman urged Shaun to call Carly and let her know where — and with whom — he was going. How is Carly going to react to this trip in which she was not asked to attend?
She will struggle with that very issue. She will challenge Shaun on that. She will question him about why that choice was made. She will be dealing with her own emotions about that choice, and a large chunk of the next episode is going to be dealing with exactly that.

TVLINE | This Carly-free episode seemed to be as much about Shaun’s facing his parents as it was about exploring his relationship with Lea…
It was a wonderful opportunity to see him with Lea, and the difference between the two women in his life and the different types of support that they each give him. 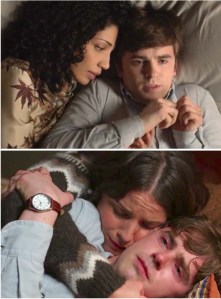 TVLINE | I couldn’t help but contrast how Shaun reacted to Carly’s embrace in the previous episode with how he reacted to Lea’s embrace in the fall finale. Am I reading too much into how much more comfortable he seemed with Lea?
You’re reading into that exactly how we wanted you to read into that… We see Shaun in a very vulnerable moment, a very different moment, and in a very nonsexual situation, but we see him achieve a level of physical intimacy with Lea that he wasn’t able to achieve with Carly, so as we go forward, we explore the significance of that.

TVLINE | Shaun has a tendency to overshare. I fear that he’s going to tell Carly about his trip down to the lake with Lea at the worst possible moment…
Well, you’ll have to tune in. [Laughs]

TVLINE | Claire seems to have finally turned a corner after that “wake-up call” in Episode 9. Will we see her work through her issues in therapy in the back half of Season 3?
The therapy sessions themselves will not be a part of it, but her figuring out how to get through this will be a big part of it.

What did you think of The Good Doctor fall finale? And how are you feeling about Season 3 so far? Weigh in via the following polls, then sound off in the comments.