American Gods‘ fire-eyed Jinn has been snuffed out.

Mousa Kraish is leaving the Starz fantasy drama; he is no longer a series regular and will not appear in its upcoming third season, he tweeted late Sunday.

“I can confirm that I wasn’t asked to come back this season,” he tweeted. “It has been an honor to play the Jinn and live in his fiery eyed skin… This character has introduced me to so much and I was proud to represent not just the Middle Eastern community in such a positive role you don’t normally see television but also the LGBTQ community that supported this character of color that you don’t see on television.”

Kraish’s ouster follows that of his former castmate Orlando Jones, who made his September 10 firing public Saturday. In an interview with TVLine, Jones described behind-the-scenes tension stemming in part from a lack of scenes for castmembers of color — including himself and Kraish — and his efforts to amend the situation.

The show later released a statement saying that the decision not to pick up Jones’ option for Season 3 was because “Mr. Nancy, among other characters, is not featured in the portion of the book we are focusing on within Season 3.” 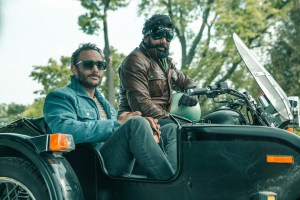 Kraish’s Jinn was introduced in Season 1, helmed by then-showrunners Bryan Fuller and Michael Green. In a “Coming to America” vignette taken directly from Neil Gaiman’s novel on which the series is based, Kraish played a mysterious genie-like figure who made love to — and then traded places with — a down-on-his-luck Muslim salesman named Salim (played by Omid Abtahi). Salim’s efforts to reunite with the Jinn and the pair’s adventures afterward made up most of their storyline for the drama’s first two seasons.

The actor pointed out that “the door isn’t closed for me” at the show and stated that he’d love to come back and act opposite Abtahi in the future. TVLine hears that Abtahi remains a series regular and will appear in Season 3.

I also want thank @starz & the amazing team there. ❤️ The door isn’t closed for me. If I’m ever asked to come back & portray the Jinn I will do it happily & proudly to be able to stand in front of my friend @AbtahiOmid & shine with the two characters who go beyond the page…