T-Pain — you might remember him as Monster — sits in on the judges’ panel for this week’s Masked Singer. And not even his insistence that Jamie Foxx, a man with whom he recorded a hit song, is not the person underneath Fox’s costume can convince Ken Jeong that the Ray star hasn’t been sneaking around backstage all season. Sigh.

Such is life at the Episode 10 mark of Season 2, when we all basically know who’s who, and it’s just a waiting game until the masks come off. So let’s get this double-episode week of fun (yep, there’s another installment Wednesday) started with a rundown of the performances! 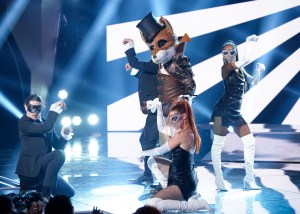 FOX | “I’ve learned I don’t need to put on my superhero disguise anymore,” Fox says at the beginning of his clue package. And that’s great and all, but hasn’t he hit the superhero thing awful hard in pretty much every set-up video this season? All I’m saying is diversify, you angel-voiced little mammal! Speaking of which, he performed a swag-tastic arrangement of Jamie Foxx and T-Pain’s “Blame It,” and I agree with Mr. Pain: It was highly impressive. (My guess: Whose Line Is It Anyway?‘s Wayne Brady.)

LEOPARD | Whenever the big cat gets booted, I will miss the way he seems to really enjoy messing with the audience and judges: That popped hip and sassy leg during his post-performance chat is the kind of thing that I enjoy, because it plays against the image we’ve all previously had of Seal, because OF COURSE THIS IS SEAL. Oh, he sings Fun.’s “We Are Young” and it is, as expected, great. (My guess: Seal Seal Sealiest Seal.)

THINGAMAJIG | Ol’ Plaid Suit does two incredibly impressive things during this week’s performance: He nails John Legend’s “Ordinary People,” and he walks down steps with those giant, fuzzy feet and doesn’t even come close to face-planting. He’s so good, I’m just going to ignore the continuance of the creepy “Nicole-amajig” storyline, for lack of a better term. (My guess: Professional basketball player Victor Oladipo.) 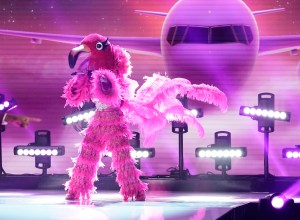 FLAMINGO | Pinky name-checks old sitcoms (A Different World; Sister, Sister; Clueless) during her video, chooses a banger of a song to perform (Fleetwood Mac’s “Go Your Own Way”) and shakes her tailfeather like it’s her job. So I’m fairly certain that it’s former TVLiner Michael Slezak under the big beak. I kid!… but wouldn’t that be AMAZING? (My guess: The Real co-host Adrienne Bailon.)

ROTTWEILER | Judge Nicole Scherzinger tears up during the dog’s performance of Lewis Capaldi’s “Someone You Loved.” Granted, this happens on the regular, but this time, her reaction is warranted: The vunerable performance was a nice change after the evening’s bigger numbers. (My guess: American Idol alum Chris Daughtry.)

THE UNMASKING | Tree was revealed to be Gasteyer. (Read an exit interview with her here!)