Ironically enough, “The Edge of Glory” was the blade that felled The Masked Singer‘s Tree, “a week before the holidays!” cried Ana Gasteyer, who was revealed as the secret competitor after singing Lady Gaga’s hit in Wednesday’s episode. (Read a full redcap of the hour.)

If the Saturday Night Live alum wants to soothe the sting of her departure from Fox’s singing contest, it’s a good thing she’s got sugar and booze on hand. Er, make that Sugar & Booze, the self-produced holiday album she released in October and is currently touring to promote.

TVLine chatted with Gasteyer about her time on the show, her affinity for the holiday season and — of course — those ol’ Schweddy balls.

TVLINE | Out of the entire cast, you were the one that was a question mark for me for the longest time.
I am so excited!

TVLINE | And then my co-worker, Andy Swift, knew you the minute he heard you. He was like, “That’s Ana Gasteyer, let me pull up this bootleg video of her in Wicked.” And I got a tutorial. You have a stan in our office.
I’m so excited. I need every stan I can get!

TVLINE | Your departure from the show dovetails nicely with the album, though.
The reason I did The Masked Singer was my son was a fan, and there are very few places in the modern pop culture landscape that you can connect the dots for people on “Hey, I’m a comedian and I’m a singer.” For whatever reason, that continues to be very confusing to people. This is a self-produced, labor of love, absolute passion project album — Sugar & Booze. I wrote a bunch of songs, I wrote the title track on the record. I’m really proud of it. I love it. It’s the culmination of 15 years post-SNL cocktail jazz efforts. It’s got a nostalgia-cky, throwback-y vibe. When they came to me for Masked Singer, I was like this could be a really cool place to work out some of those identity issues for the public. In theory. [Laughs] So I felt very grateful. That’s why we chose the tree: It’s very joyful and ridiculous. I wanted it to be very jolly and gay and happy and holiday. My live shows are very much a cocktail vibe, kind of a mobile party unit. So I was really excited that they let me work with them on the costume.

TVLINE | From the beginning, I’ve loved that Tree dolled herself up for the affair. She’s wearing heels and pearls.
Oh yeah. I pitched the idea. Initially, I really wanted her to be green. I wanted her to be a proper Christmas tree. But because Flower had already been designed, there was a bump on the color palate, basically. My only real, true regret of getting cut when I did, besides the fact that Tree was felled right before the holiday episode — which seems like a terrible metaphor for 2019 — is that I really badly wanted a move where I had ornaments that we could operate, LED. That was my fantasy, that we could have timed lights and ornaments that we could turn on and off.

TVLINE | That would’ve been cool.
Yeah. We had a move to organize that on the show. Then I got chopped down.

TVLINE | Did you have to juggle Masked Singer with anything else? I know you’re touring now, you had Schooled earlier in the year.
Yeah. My album was in post-production and we were definitely putting the finishing touches on it. I was also writing my Audible Original Holiday Greetings from Sugar & Booze, which is the Audible miniseries that I did using music from the record. So I was definitely pretty knee-deep in it. I had an August 1 deadline, so I was definitely leaving The Masked Singer and going and hiding and chaining myself to a computer every night.

TVLINE | You took the suspicion that you were Tree head-on with Jimmy Kimmel recently. I was impressed that you managed to discuss it without lying.
Well, thank you. I don’t like to lie. Honestly, it took me by surprise. I was there to promote Sugar & Booze, and I just made it about that in a funny way. The reality was, if you follow the Twitter traffic at all, the guesses are so fantastic. I literally got everyone from Rachael Ray, who Robin Thicke is going to go to the grave maintaining I am, he still thinks that I’m Rachael Ray, all the way up to, a number of people thought I was Michelle Obama. Which was the most hilarious thing I’ve ever heard in my entire life. The guessing swath in and of itself creates its own comedy and was very satisfying and fulfilling, because there are all kinds of singers and it was all kinds of performers. It was all over the map. It makes me laugh… I mean, I’m not the greatest singer in the world, but I did play Elphaba [in Wicked] on Broadway. It is very hard to belt an F. It’s not easy! I’m like, “You guys, Rachael Ray can’t belt an F!” [Laughs]

TVLINE | Speaking of Elphaba, what was worse: green make-up night after night, or Tree costume?
Definitely Tree costume. Both costumes weighed about the same; the Elphaba dress is about 40 lbs., and the Tree costume was really heavy and had multiple parts. But the issue isn’t really the costume so much as it is the echo of your voice against yourself, the limited amplification. IT’s very strange to sing against the mask, because you’re bouncing back. For a person who’s sung on Broadway or with a band, I’ve used to hearing my own voice through a monitor or just in the house, so I can usually hear my voice coming back to me through the audience. That is really weird, to not have that, to not have a sense of your own voice. I have a big voice, so I definitely felt like I probably didn’t sing as well as I sing, in some respects, because it takes quite a bit of getting used to. 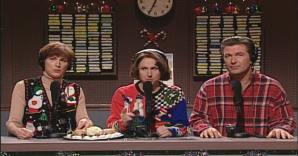 TVLINE | You were in so many holiday sketches when you were on Saturday Night Live. Do you have a favorite?
Holiday-wise, I obviously hit the jackpot — and completely by accident — between Schweddy Balls and Martha Stewart’s Topless Christmas and the Thanksgiving fighting family. Cinder Calhoun Basted in Blood, I love that one. I don’t know what it is about this time of year, but it seems to be my creative time of year. I feel like I’ve been very blessed and lucky, and I love that that’s an annual tradition for people. It means a lot to me. And now having done the Tree on Masked Singer and Sugar & Booze, it seems to be my favorite time of year, for good reason.