I’m not sure any of us were — insert Valley Girl accent here — “Like, oh-my-God!” about the idea of The Voice’s ’80s Week after we heard what Team Kelly Clarkson’s since-eliminated Shane Q did to Billy Ocean’s “Caribbean Queen” during the Top 10’s performances. But on the other hand, that disaster did kinda-sorta mean that the Top 8 couldn’t do worse Monday night, right? Read on, and we’ll discuss not only the semifinalists’ throwback duets but also whether their solo numbers qualified as singular sensations. 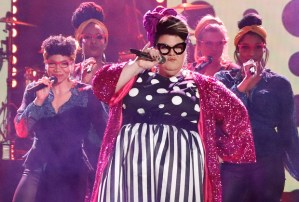 Katie Kadan (Team Legend), “Lady Marmalade” — Grade: B | In rehearsal, John told Katie that he wanted her to do one more badass number before going with a big ballad in the finale. And considering how perfect the Labelle classic was for her, a spot in the Final Four seemed like a, ahem, “four”-gone conclusion. But on stage, supported by a group of backing singers wearing Katie-esque glasses, the human hurricane seemed at first a little muted. There was nothing wrong with what she did, it just didn’t really make the wine in my glass jiggle until about halfway through. Even then, it struck me as a great singer giving a good, not great, performance. Maybe Katie was uncomfortable with the light choreography with which she was tasked? Maybe I just needed to crank up the volume? Or maybe this just wasn’t Katie at her absolute best.

Kat Hammock (Team Blake), “Somewhere Only We Know” — Grade: C+ | Adorably, Kat noted in rehearsal that hey, she was kinda-sorta almost to the finals already since “semifinals” has “finals” in it. But she knew that it could all be over, well, overnight; “This could be the end of everything” was the lyric of her Keane cover that really drew her in. Lucky for her, she was pretty good here. There were notes that made me go “Hmm” (and not in a “Hmm, that was great” way), but mainly, this was Kat deploying her breathy, middle-school Lana Del Rey voice to its best effect. She reminded me of an elf whispering a secret to me. Afterwards, Blake, whose enthusiasm for Kat could barely be contained, said what it seems like he always does: That was her best performance ever. He even promised to see to it that, whatever happened Tuesday, she’d get to make records. 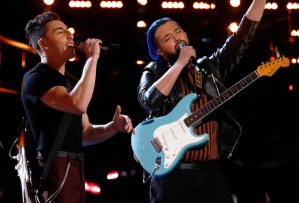 Ricky Duran (Team Blake) and Will Breman (Team Legend), “Your Love” — Ricky’s grade: D; Will’s grade: C | OMG, I couldn’t believe they were doing the Outfield; I actually love this song. If only I liked Ricky and Will’s version. The number seemed to suit Ricky’s voice better theoretically — but only theoretically. He often went flat — weird for a contestant who is generally so on point. Will had more energy but, as he has now and again, wound up yelling occasionally instead of singing. And they both seemed as, maybe even more, interested in their guitar solo than in their vocals. By the time this mess was over, I wasn’t excited anymore that they’d done a song that I love, I was sorry that they had. Ugh.

Marybeth Byrd (Team Legend), “Before He Cheats” — Grade: C | In rehearsal, John theorized that Marybeth had wound up in jeopardy last week because they’d strayed too far from her country roots. So not only would they be merging back into that lane with her Carrie Underwood cover, she was eager to embrace the sassiness of the done-me-wrong hit. On stage, her phrasing on the verses was kinda rushed, but the growl that she brought to the choruses was selling it… until she stopped dead in the middle of a line as if she’d forgotten the lyric (or had run out of breath or… something). After that, her confidence appeared to be kinda shaken. So her performance wound up being a real mixed bag. I had a feeling, promising as she is, she wouldn’t be making the Final Four. 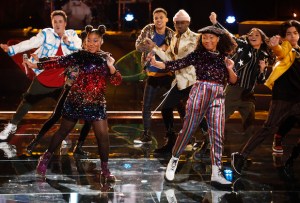 Hello Sunday (Team Kelly), “Don’t You Worry About a Thing” — Grade: A- | After reminding us in their pre-interview that they are the cutest things this side of koalas, Hello Sunday knocked out their coach in rehearsal by showing up with a toughie of a Stevie Wonder song to tackle. When they hit the stage, they proved that they were up to the challenge. They started off singing like performers three times their age, then nailed their trademark gorgeous harmonies and demonstrated pretty stunning range and vocal control. I wasn’t sure that this was the kinda number that would resonate with viewers, but da-amn, this was Hello Sunday at their best. (Then again, the audience at the live show went wild!) “America, they are 14 years old,” Kelly reminded us afterwards, “and they just nailed that.” True and true.

Marybeth Byrd (Team Legend) and Jake Hoot (Team Kelly), “Up Where We Belong” — Marybeth’s grade: B-; Jake’s grade: C | The way that Marybeth began her and Jake’s Joe Cocker/Jennifer Warnes duet suggested that it could be absolutely magical. It wasn’t, though. Their team-up was pleasant for the most part, but the duo’s voices never really gelled. Jake seemed like he was performing at, like, a 5 when we know he’s capable of getting up to at least a 7. Marybeth fared a bit better but was still hit and miss. I don’t see her making it past Tuesday (whereas the country vote is likely to see Jake through no matter what). 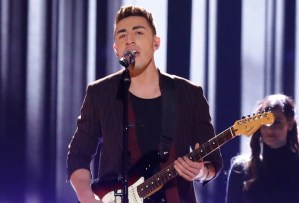 Ricky Duran (Team Blake), “Let It Be” — Grade: B+ | Before Ricky hit the stage, he tearfully told us that, before his mom passed away, he could imagine her giving their family the message of the Beatles classic, just to let it be. On stage, he began at the piano, his raspy voice sounding as solid as it did steeped in emotion. By and by, he took his guitar and headed to the mic stand, turning loose a nice falsetto at the end of the move. I question the wisdom of his long guitar solo — great, he can play, but the show is The Voice, not The Guitarist — and further question why the arrangement took so damn long to build. Worse, when it did build, Ricky wound up being kinda drowned out by the band. Regardless, his vocal was great — flawless and full of feeling. I just wasn’t nuts about the arrangement and mix, and those weren’t his fault.

Will Breman (Team Legend), “Locked Out of Heaven” — Grade: B | After making a joke that even he realized nobody would get — Thanksgiving wasn’t long ago, but the stakes had never been higher? — Will wondered whether his Bruno Mars cover would be the occasion to give a coupla audience members a smoldering gaze. That was, if/when he perfected one, he added. (In the end, he turned his gaze on Blake.) And he was pretty smokin’ up on stage. There was that unhinged quality to his performance that has almost become his calling card, but he also maintained enough vocal control that he wasn’t just fun to watch, he sounded pretty good, too. It wasn’t a pitch-perfect cover or anything, but it really showed off Will’s rock-star quality (and almost made me forget what he and Ricky did to the Outfield). 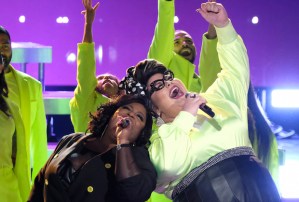 Katie Kadan (Team Legend) and Rose Short (Team Gwen), “Express Yourself” — Katie’s grade: B+; Rose’s grade: A- | Hmm… I wasn’t sure how I felt about Katie and Rose teaming up on Madonna’s classic; both contestants have voices that are way bigger than Madge’s, so if you put them together… could that possibly work? Turned out, yeah, sure it could. In fact, the collaboration brought Katie to life in a way that her “Lady Marmalade” hadn’t, and let Rose bring to the number a tangy vocal quality that allowed this rendition to at times out-sass the original. Fun stuff.

Kat Hammock (Team Blake) and Hello Sunday (Team Kelly), “We Belong” — Kat’s grade: F; Hello Sunday’s grade: F | What did Pat Benatar ever do to the producers of The Voice? Seriously, for them to allow this trio to go on stage and just massacre her hit? I’m bewildered. Until this, I was not aware that it was possible for a human being to cringe for three minutes straight. Parts of me are still cringing, it was so godawful. The kids hit fewer notes than you or I could bull’s-eyes on a dartboard with our eyes closed and throwing with our feet. And these are talented youngsters; this just did zero to demonstrate that fact.

Rose Short (Team Gwen), “I Want to Know What Love Is” — Grade: A- | Rose decided to double-dip on the ’80s, choosing Foreigner’s oldie for her solo number. Gwen said in rehearsal that the selection wasn’t about nostalgia but strategy, as it would allow her only remaining contestant to get really vulnerable on stage. Struck me as so smart that I was surprised her performance wasn’t saved to close out the episode. When Rose took her place in front of a kaleidoscopic background on stage, it was a good thing she has a massive voice, because the band really needed to be mixed back; a singer any less powerful would have been totally drowned out. And she was, as you’d expect, terrific, taking us not just to church but all the way to heaven. (She made a blubbering wreck of Gwen.) But where was Rose’s backing choir? So many acts had had a stage full of backing singers and dancers, it was strange as hell that she was up there with just a coupla band members. (We could hear the choir, they just weren’t seen to add the visual impact that they should’ve.)

Jake Hoot (Team Kelly), “Desperado” — Grade: A- | In rehearsal, Jake explained to his coach that he was performing the Eagles’ classic for his mom, who’s always loved it. After hearing his rendition, Kelly had not a single note. She was so impressed, she was stunned all over again that he had been just a one-chair turn. On stage, he gave us the Jake that I wish he always was — not only resonant of voice but sure enough of himself and what he was doing that he was able to pack his performance with the emotion of a born storyteller. Now I understood why Rose didn’t get the closing number — this was Jake at his absolute best. He even managed to land the little high note at the end. If there had ever been any doubt that he’d make the finale, this erased it. Deal sealed!

So which duet did you like best? And which solo performance really wowed you? Vote in the polls below, then hit the comments. Are we still in agreement that these are the singers who should make it to next Monday’s Finals?