Now that The Voice has whittled down its Season 17 contenders to just the Top 10, we’re getting a pretty clear picture of which singers are going to make it all the way to the Final Four — and which ones are going to fall short. For instance, Team Kelly Clarkson’s Shane Q and Team Gwen Stefani’s Joana Martinez may have another week in them, perhaps even two, but Final Four? Uh-uh. Nope. Just don’t see it.

The voting could still go kerflooey — if Shane could outlast Team John Legend’s Max Boyle and Team Gwen’s Myracle Holloway, anything could happen! — but the way I see it, and based on your responses to the polls that follow TVLine’s performance recaps, the last four vocalists standing are going to be… 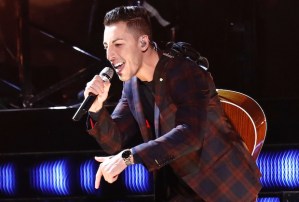 Ricky Duran (Team Blake Shelton) | A born frontman, Ricky could almost get by on swagger alone. But he also has the vocal chops to back up his showmanship. He’s rarely, if ever, hit a bum note, and when he gets the right song (“Downtown Train,” say), he’s virtually unstoppable, performing with the casual confidence of an old pro whose control of his voice allows him to really kick some rasp.

Jake Hoot (Team Kelly) | Since the odds of the Final Four not including a country boy are slim to none, and Jake’s the last man standing in that dirt road lane, he’s a shoo-in. But he’s a pretty deserving shoo-in, too, since, although he struggles with his confidence on stage, he sings with a clarity and sincerity that opens hearts, then sets about tugging at their strings. 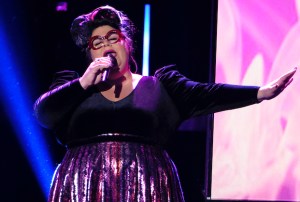 Katie Kadan (Team Legend) | For my money, this phenomenal force of nature shouldn’t just make the finale, she should win the season. It’s hardly even a contest! Consider: Not once has Katie given a performance that was anything less than thrilling, she has a ready-to-market image, and if you said that you couldn’t pick her husky voice out of a crowd, you’d be lying. Simply put, she’s a star.

Rose Short (Team Gwen Stefani) | “Maybe I’m Amazed” wasn’t just the title of the last song with which Rose brought down the house, it’s also my reaction to her performances. Well, minus the “maybe” part. If anyone has a real shot of beating Katie, it’s Rose, who, while a less flashy performer, has greater range, a voice that’s as rich and soulful as it is powerful, and a smile that’s brighter than the spotlight.

So, which of the Top 10 do you think will make the Final Four? Hit the comments with your picks.