With The Voice’s Season 17 Semi-Finals only a week away, the remaining singers endeavored on Monday night not just to sound like the Top 10 but like perfect 10s. That Team John Legend’s Katie Kadan and Team Gwen Stefani’s Rose Short would do so was pretty much a foregone conclusion; that Team Kelly Clarkson’s Shane Q and Team Blake Shelton’s Kat Hammock would, not quite so much. Which vocalists rose like a high note to the challenge? Read on, we’ll evaluate, then you can offer your critiques in the comments.

Rose Short (Team Gwen), “God’s Country” — Grade: A- | In rehearsal, Gwen warned Rose that, by taking her mom’s advice, she was taking on the biggest song that Blake had ever had. But in a cutaway, he remarked that he was only worried that she would make it sound better than he could. He shoulda been scared! On stage, the powerhouse spat gasoline from her lips, then dropped matches in the puddles. At times, I wasn’t sure that the number was a 100-percent perfect fit for her — afterwards, even she exclaimed over and over again that it was hard! — but overall, her performance served as an irrefutable reminder that, while most of her competitors are throwing punches, she’s delivering knockouts. 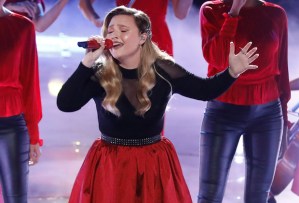 Marybeth Byrd (Team Legend), “Lose You to Love Me” — Grade: B | Rehearsing at her coach’s house, Marybeth sounded terrific — the sparer the arrangement, the crazier I am about her voice, it seems. (Maybe that’s because the simpler the instrumentation, the unlikelier she is to be tempted to yell rather than sing?) When she took her place beneath the spotlight, she sounded fine at first, good even, but mostly made me want to listen to Selena Gomez’s original again. As Marybeth’s performance went on, I felt like I should be loving it — her vocal was pretty, and she was engaging, vulnerable and present. Still, I just liked it. Maybe I actually wanted her to do what John noted that she admirably hadn’t done — oversing it. Strange.

Kat Hammock (Team Blake), “You’re Still the One” — Grade: C+ | I don’t think Kat is generally flat, but there’s something about her voice, gorgeous as it can be, that makes me feel like it’s flat. Is that weird? Lana Del Rey makes me think that a lot, too, only I never imagine her smiling through a number the way Kat tends to. It’s odd and incongruous. Anyway, when Kat hit the mic, she did her trademark thing, puffing out notes that were as sweet, light and airy as cotton candy, and that sounded like maybe they were being played at an RPM or two slower than the record was intended. The overall effect was hypnotic — there’s a trippy quality to her singing style that usually gets me high — but toward the end, she went a bit off the rails, colliding with some pitch problems that were, eesh, painful to hear. In the grand scheme of things, this wasn’t a disaster, but it also wasn’t the triumph that Blake insisted it was. 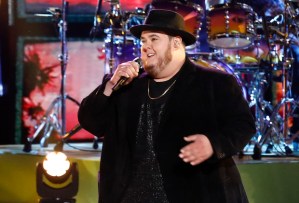 Shane Q (Team Kelly), “Caribbean Queen (No More Love On the Run)” — Grade: F | Look, I don’t mind Shane. The guy can sing; he’s just generally shaking in his shoes, too much to show off what he can actually do. But when I saw that he’d be performing Billy Ocean’s oldie-but-a-goodie (and, bizarrely, before the upcoming ’80s week?), I cringed. Bless her heart, Kelly tried like hell to rearrange the number, but I feared this was a doomed endeavor. Sadly, from the beginning, it was clear that I was right to have been fearful. Shane didn’t seem to know how to handle the vocal on the verse, and the band totally overpowered him on the chorus — which might not have been such a bad thing; at times, he struggled to find the key the same way I do when I’m trying to unlock my front door in the dark. Remember how I said Kat’s number hadn’t been a disaster? This was a disaster. Poor fella, I wasn’t sure whether I wanted it to be over more for his sake or my ears’.

Jake Hoot (Team Kelly), “That Ain’t My Truck” — Grade: B | In rehearsal, Jake told Kelly that his Rhett Akins cover was dedicated to his cousin who died in Afghanistan. I had a feeling his cousin was rockin’ in the hereafter; Jake sounded badass and — correct me if I’m wrong — looser than he ever has. On stage, from the get-go, he killed it. This is absolutely the wrong metaphor, but there’s something about Jake’s voice that you can hear through a crowd, like when your mom is calling you to come home at sundown. (Again, I acknowledge that that’s absolutely the wrong metaphor — but Jake makes you listen up the same way.) Now and again, he hit a pitchy bump in the road, but by and large, this was terrific. If he lacked a little (a lot?) in stage presence, he made up for it with his rich, growly vocal. 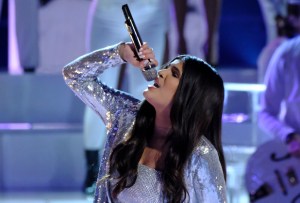 Joana Martinez (Team Gwen), “Impossible” — Grade: A | Before practicing with Gwen, Joana’s coach suggested that the challenge of Christina Aguilera’s Alicia Keys-written hit was gonna be managing its “vocal Olympics.” When the teenager arrived on the starting line, she looked like, screw the silver and bronze, she was going for the gold. Her body language and that little bit of stankface that she threw us said that she wasn’t here to mess around. And damn, she did not mess around. Where has this Joana been the last coupla weeks? This was the Joana whose “Holy crap!” Blind Audition had gotten her shortlisted as a frontrunner to win. Though it wasn’t a flawless performance — how many are, really? — Joana bent notes like Wonder Woman does steel bars and sang with a ferocity that made me think the title should’ve been “Unstoppable” instead of “Impossible.” She killed it, brought it back to life, then re-killed it. She was that good — again! Finally!

Katie Kadan (Team Legend), “Rolling in the Deep” — Grade: A | Well, if anybody could make Adele sound like she has a puny voice, it was Katie. So it was extra gratifying to hear her say in her pre-performance interview that she finally felt like she didn’t have to hide, she could just be herself. On stage, she sang like a thunderstorm rolling in. At this point, I’m pretty much out of superlatives to throw at Katie. Every week, she gives a performance that’s so polished, she could see her reflection in it; she has a voice that’s unmatched in its magnitude and consistency; and she comes equipped with a style that implies she’s been a superstar for ages. If Voice winners went on to be super famous, she’d be destined to be iconic. Ha — and this wasn’t even my favorite performance of Katie’s! 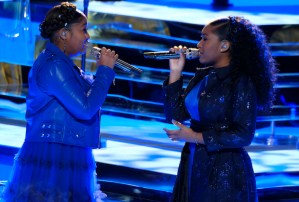 Hello Sunday (Team Kelly), “Stone Cold” — Grade: C+ | “It is kind of a dark song for 14-year-olds!” Kelly said in rehearsal of the girls’ choice of Demi Lovato’s hit to cover. But they could relate to hardship — one of the kids is diabetic — and they actually got teary during practice. When they stood behind the mic, they mostly managed the extremely low notes that started the song but just weren’t at their best. They sounded good, as they tend to, when they sang together, but individually, they seemed to be straining a lot — like more notes than not were just barely within their reach. Maybe it had been a mistake for them to take on a song that made them cry? The feeling was there; the vocal, not quite. And apparently, there had been even more to their conversation with Kelly in rehearsal than we saw. Complimenting them, the coach could barely choke out a “Well done” over the lump in her throat.

Ricky Duran (Team Blake), “Born Under a Bad Sign” — Grade: B+ | “You shouldn’t feel pressure,” Ricky’s coach told him in rehearsal, “you should feel opportunity.” Easier said than done. But Ricky definitely connected with the song, owing to his father’s suicide and mother’s passing. Blake was excited that Ricky’s guitar-playing was going to “fry the face off of your skull”; I was more psyched that the Albert King classic sounded like it was going to suit his raspy voice to a T. Performing, Ricky seemed so at home, he could’ve been playing at a blues club instead of on The Voice stage. Throughout, he deployed his sandpapery voice with the same ease that you or I might our remote controls. If I had a quibble with his performance, it was only that it didn’t really allow Ricky to show off. He sounded great, but there wasn’t that moment that everybody would remember — that big note, that looong note, that “Oh my God, how did he sing that high and/or low?” note.

Will Breman (Team Legend), “My Body” — Grade: B++ | Will said in rehearsal that he especially liked this Young the Giant song because of its high energy and the fact that it was a good representation of what he wanted to do as an artist. Knowing the song (well, as of today — thanks, YouTube), I worried that Will didn’t have the vocal control to manage the more rockin’ parts without sounding like… well, like he was still in the metal-screaming band that he told us he’d been in in high school. On stage, Will got off to a good start. I didn’t even mind the yelly parts. Maybe I’d underestimated him. His vocal was wholly imperfect and he danced like me at a wedding before I’ve had my second glass of wine (and after I’ve had my fourth), but it all kinda worked for the alt-rock number. The longer it went on, the more sold I was. Will delivered. This was actually one of his best performances and arguably his most fun one. (Ricky could have used some of Will’s infectious, raucous energy!)

So, which of the Top 10 delivered a performance that you thought was a perfect 10? Vote in the poll below, then hit the comments with the names of the two singers you think will be eliminated Tuesday.