The Masked Singer‘s Butterfly has kept herself in a cocoon of sorts for the past year. A split from a fiancé, the resurgence of depression and a medically mandated withdrawal from a Broadway show will do that to a person. But with Wednesday’s unmasking — and the revelation that the Winged One was former Destiny’s Child member Michelle Williams —the singer says she’s feeling good and ready to go… albeit slowly.

“A new start for me is a new start that includes pacing myself, not people-pleasing and saying yes to everything. Or trying to meet somebody else’s deadlines at the expense of my health. I’m not doing that anymore,” Williams tells TVLine. “The new start is saying no to things, no matter what it is. If I feel like it’s gonna drain me, I don’t want to do it. I’ve been in that place, and it’s been feeling good to say no.” She laughs. “When you’ve been running around for two years straight, you can take a year of no.”

Read on for more of Williams’ thoughts on her reality-show metamorphosis (and why she feels really bad about lying to a bunch of elves). (And read a full recap of the episode here.)

TVLINE | Everyone who performs on the show says how hot and cumbersome the outfits are. Can you remember a moment when that all fell away, and it was just you and the music? When you weren’t conscious of being in a giant butterfly costume?
Oh no no no. To me, once I get past the first two or three seconds and I see that I’m still alive on stage, then you just go for it. [Laughs] It’s amazing what adrenaline can do. You can have the worst sinus headache or not feel well, and once you perform, you’re like, “Oh, I’m OK!” That’s what adrenaline does. You just go out there and you do what you’re taught. You do what you practiced. Go out there and have as much fun as you can.

TVLINE | You mentioned that the show was a comeback for you. You’ve laid low the past year, living in Atlanta. Are you still based there?
I am, actually. I didn’t think I’d ever want to live in Atlanta, but when I tell you, it’s been good for me. A great tribe of support is down there for me, and that’s where I’m going to stay for right now.

TVLINE | What did the last year look like for you? You were resting a bit and taking care of yourself.
A lot of therapy. I was with my trainer every day working out. There’s an amazing retreat that I would go to in a little town called Hiddenite [North Carolina] called Living Waters and that’s just been my safe place.

TVLINE |  You’ve mentioned that some famous people guessed you were Butterfly, but what about the people in your day-to-day life?
Oh of course. I was getting text messages from my first cousins, and they were like, “We know that’s you!” I just called my aunt one day, just to check on her and see how she was doing, and somehow she threw it in. I thought we were getting ready to say goodbye, and she was like, “All right now, Miss Butterfly!” I was like, “Aunt Jackie, what are you talking about?!” I did a lot of lying, September to now. 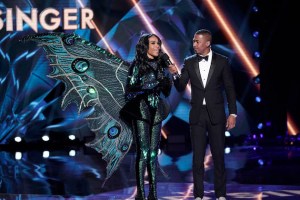 TVLINE | I know lying can be a necessary evil. But my parents were big on not lying growing up.
Mmm-hmm. Yup. Yup.

TVLINE | And we all lie every now and then. But it eats me up when I do it!
It does. I’ve been in this Christmas musical, it’s called A Snow White Christmas, and there are two sets of dwarves… I hated lying to those kids. They would run up to me, “Michelle! Michelle! Is that you on The Masked Singer?” And I would say, “Honey, how could that be me when I’m here with you?” [Laughs]

TVLINE | You try to evade rather than outright lie.
Yeah! They were like, “OK, I guess that makes sense.” Because in their mind, it’s live. In their mind, it’s happening right then and there. It’s funny, because even today, at the matinee, a young girl was like, “So, were you there last night?” And I was like, “No, I was here last night.” [Laughs] Oh my God, I’ve had to lie to the children!

TVLINE | Last December marked your lowest point. Would you have ever thought then that, by this December, you’d be up on stage in a big butterfly outfit?
You know what’s so crazy? My cousin mentioned the fact that this time last year, in two days it’ll mark about a year that I had to be medically called out of [Broadway’s Once On This Island]. And here I am a year later, like you said, getting rave reviews for performances on The Masked Singer. I’m in another stage production. Either this is rewriting my story, or this is a new chapter in the story.