I don’t know who will win The Masked Singer‘s second season, but this week’s episode really cements which contestant I’d like to win. I’ll give you a hint: She’s green, smells pine-fresh and man, does she have balls.

That’s right: I’d like Tree to best her competition and come out on top this go-around. The pipes! The range! The energy that manages to nail “charmingly bubbly” without crossing the line into “for-the-love-of-God-go-away annoying.” Full disclaimer, though: This is a show that booted vocal deities Gladys Knight and Patti LaBelle, so I have no real hope that Tree’s talent will win out in the end. And with that uplifting thought, let’s get to this week’s performances! Continuing with the smackdown format, Butterfly went up against Fox, while Thingamajig took on Tree. 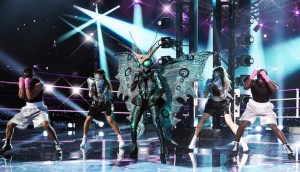 BUTTERFLY | “If you want my future, forget my past,” Butterfly says during the video montage preceding her appearance. (I’ll save you the trouble of singing through the lyrics in your head: They’re from “Wannabe” by the Spice Girls, which turns out to be a red herring. “I’m used to sharing the stage with giants,” she adds, and then we get a vocally strong performance of Demi Lovato’s “Sorry Not Sorry.” Is it me, though, or is the winged one not moving as much as she normally does? Maybe to conserve her breath for those big notes? (My guess: Destiny’s Child member Michelle Williams.)

FOX | We know he can nail a dance break, but Fox’s song selection this week — Chris Stapleton’s “Tennessee Whiskey” — strips everything away and allows the audience to focus on his rich vocals. Meanwhile, I’m focusing on the “Yes, and…” sign in his clues package, a classic mantra among the improv comedy set. (My guess: Whose Line Is It Anyway?‘s Wayne Brady.) 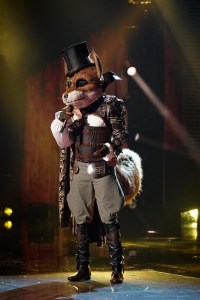 THINGAMAJIG | OK, OK, I’m just gonna say it: Nicole Scherzinger’s obsession with the soulful serenader has gotten so far out of hand. You can’t even see his face, mama! Talk about emotionally unavailable! Thingamajig’s clues include a love note from “Maryland” and something to do with either laser discs or platinum records. (Yeah, I don’t really understand it, either.) Meanwhile, his rendition of Michael Bublé’s “Haven’t Met You Yet” is spot-on, if a bit sedate. (My guess: Professional basketball player Victor Oladipo.)

TREE | The clues come at us fast, furious and somewhat misleading during Tree’s video. There are references to “Smelly Cat” and “simmer down,” which seem to indicate Friends and Cheri O’Teri’s Saturday Night Live bit, respectively. But her cry of “Opa!” and the witch’s hat — along with a powerful take on Bonnie Tyler’s “Total Eclipse of the Heart” — erase any doubt in my mind about who’s beneath those branches. (My guess: SNL alum Ana Gasteyer.) 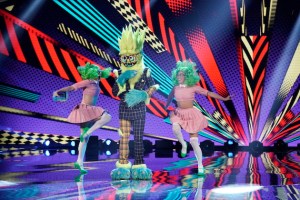 SMACKDOWN | Who else kinda forgot how good Usher’s “Caught Up” is? When Thingamajig busts it out during his head-to-head with Butterfly, he’s the clear winner — even though her version of Imagine Dragons’ “Believer” was quite strong. Winner: Thingamajig!

THE UNMASKING | Butterfly was revealed to be Williams, who got emotional as she discussed returning to work after taking a much-needed year off. (Read an exit interview with Williams here!)