Legacies‘ latest supernatural visitor turned out to be a real know-it-all.

The legendary Sphinx popped up — as so many Malivore monsters do — in the heart of Mystic Falls on Thursday, interrupting an awkward conversation between Hope, Josie and Lizzie, the latter of whom did her best to ease the tensions between Landon’s scorned love interests. (“For the two of you not to be talking to each other just because you’re competing for the love of the same garden gnome, I think we’re more evolved than that as women.”)

It was a fun little scene, and for what it’s worth, Danielle Rose Russell has really been enjoying Hope’s newfound friendship with Lizzie. “Jenny and I never worked together that much, so now we’re getting really close,” she tells TVLine. “Unless you work together, you don’t get to spend as much time together on set as you might think. And I love the new dynamic between Hope and Lizzie. It feels like a very real relationship, and I hope it continues.” 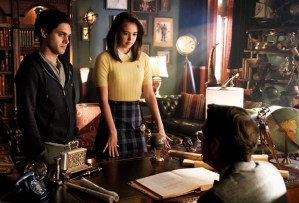 Meanwhile, Josie and Landon turned to “Headmaster Vardemus” (aka Clarke!) for a way to destroy the Malivore portal that wouldn’t require any major sacrifices. His solution was to create a copy of Landon, inject it with Hope’s blood and send him into the pit, all of which sounded good on paper… until Landon’s clone, immediately upon being born, ran off looking for Hope, his one true love.

A furious Josie returned to “Vardemus,” who convinced her to channel all of her rage, sadness, etc. (all good feelings!) into a tiny trident, an adorable trinket that would have been even cuter if it wasn’t so evil. After drawing out Josie’s darkness, Clarke finally revealed himself to her, just as Alaric and Dorian were off putting the pieces together themselves.

“I started to figure it out after he devoured that monster at the end of Episode 3,” Russell says of Vardemus’ true identity. “Plus, we all knew that Alexis [Denisof] had a set period of time that he was going to be on the show, so I kind of figured he was tied into everything. And he was so wonderful to work with.”

With all secret identities finally out in the open, Hope & Co. faced off against Clarke, who tried to steal Landon’s body by stabbing him with that cute li’l trident. Little did he know, he was actually stabbing Landon’s copy (aka “Simu-Landon”), whose powerless vessel proved much easier to take down than Clarke’s. When the dust settled, Hope sat Josie down for a heart-to-heart chat, which ended with Josie giving Hope her blessing to re-enroll at the Salvatore School.

Upon learning from the Sphinx that “there’s no keeping Landon safe as long as he remains [at the Salvatore School],” Rafael convinced his brother to join him on the road, which also conveniently freed Landon from having to actually choose between Hope and Josie. (Simu-Landon was right about his real self being a total coward.) But fear not, ‘shippers of all forms, because a choice is still coming.

“In the next couple of episodes, you’ll see how he makes his decision, and it’s not how you’d expect him to do it,” Russell says. “He does care for Josie, and Kaylee [Bryant] has actually explained it really well: If you take every element of Landon and Josie, it makes sense, but that’s before you add Hope into the mix. And he’s clearly in love with her. He just doesn’t know what to do, or who to do right by, without hurting people.”

As for the Sphinx’s final riddle, which hinted that something even worse than Malivore is on its way, Russell says, “From what I’ve heard, including rumors, we should be very concerned.” She won’t say whether the riddle refers to Kai (“I honestly have no idea”), but she admits that she’s “so excited” to get to work with Chris Wood.

“From the scripts I’ve read with him in it, I can say that we have some really cool stuff coming up,” she says. “It’s definitely going to wreak havoc on the story.”

Your thoughts on this week’s Legacies? Any fun theories about the Sphinx’s final riddle? Whatever’s on your mind, drop it in a comment below.