A friendly face returned to the fold on Thursday’s Legacies, while another face was twisted into something quite unrecognizable.

Let’s start with that long-awaited return: This week’s episode pit Hope against a shunka, “a carnivorous creature that feasts only on werewolves.” Fearing that Rafael might end up at the top of its menu, Hope — along with Landon, who caught her in the act of using a locator spell to track down the wayward wolf — ventured into the woods to slay the beast and save the day.

Unfortunately, we all know that these little hunting adventures never go quite as planned. Hope transformed in an attempt to draw the shunka away from Landon (“You’re a were-witch? Holy smokes!”), but the truck-sized beast showed little interest in her, choosing instead to chase after the tasty phoenix.

That’s when it finally happened: Hope came across a very familiar-looking werewolf, and although Rafael was hesitant to trust her, the thought of Landon being in trouble was enough to convince him. After returning to human form, Raf teamed up with Hope to put an arrow through the shunka and give a long-overdue hug to his brother from another mother… and from another evil hell-dimension of a father.

* Josie got her first real taste of darkness this week… and she kind of loved it. While the rest of her teammates agreed not to use their powers in the annual football game against the Mystic Falls Stallions, Josie chose to follow Headmaster Vardemus’ suggestion that she embrace her full potential, regardless of what people like Alaric and Kaleb told her to do. But all it took was one little spell gone awry to send poor Ethan (aka “teenage Tom Brady”) to the hospital, effectively squashing his hopes for a football scholarship. “I hurt someone,” Josie told Landon at the end of the hour, “and I think I wanted to.” She promised to try and keep her darkness in check moving forward, but considering she also vowed to defend Landon against any future Malivore monsters, I’m thinking she may struggle to keep that first promise. 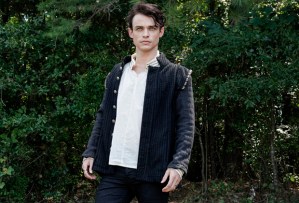 * Lizzie finally got some answers about Sebastian this week, but to be quite honest, their brief encounter actually left me with more questions than ever. I wasn’t surprised to learn that he’s a vampire, nor was I surprised that he and Lizzie engaged in a steamy lip lock. But when MG arrived on the scene, and it appeared as though Lizzie was making out with The Invisible Man… well, consider me surprised.

* And speaking of people not being what they appear, can we talk about Vardemus for a second? Like, a very long second? As if it wasn’t bad enough that he engaged in fisticuffs with our sweet bearded Alaric, the Salvatore School’s new headmaster ended the hour by tracking down the shunka’s carcass in the woods… and eating it! (He has terrible table manners, by the way, but that’s neither here nor there.)

OK, let’s talk about this week’s Legacies: Are you relieved to have Rafael back, even if he’s clearly struggling to adjust? Are you excited for Josie’s inevitable journey to the dark side? And what do you make of Sebastian and Vardemus’ supernatural secrets? Drop all of your thoughts and theories in a comment below.