Kara and Lena’s icy relationship took an even frostier turn on Sunday’s midseason finale of Supergirl, in which the DEO recruited a surprising new ally to put the freeze on Lena’s chilling master plan. (Sorry for all the cold weather puns, but I saw Frozen 2 earlier today, so I can’t promise that you’ve seen the last of them.)

Even after Lena nearly blasted her with Kryptonite cannons, Kara refused to accept that her friend was lost to the dark side. (“I’m not going to give up on you,” she declared with the sincerity of a determined lover.) With Brainy’s help, Kara delivered one final plea via hologram, urging Lena, “Don’t let my mistakes turn you into something you’re not.”

When that didn’t work, Kara turned to Alex for some sisterly advice. “I made her believe I was the best friend who would never hurt her, and then she finds out in the most horrible way possible that our friendship was based on lies,” Kara recapped. But Alex wasn’t about to let her sister take the blame for this one. “Your choice to conceal your identity … was born out of love and compassion,” she reminded Kara. “I love Lena, too. But this isn’t just two friends that are in a fight. This is someone who has turned a corner. … We have to start thinking with our heads, not our hearts.”

Alex’s conclusion was that “Lena is leading her own double life. We can’t put our faith in some distant hope that she’s going to do the right thing when every single action she’s taken until now points to the contrary.” It was for this reason that Alex tricked Kara into helping the DEO hack into Lena’s bunker and manually drop her defense system — a betrayal that Kara didn’t take too lightly. Still determined to save Lena and prove everyone wrong, she then turned to Malefic in the hopes of counteracting Myriad’s Q waves. 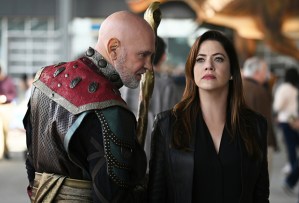 Meanwhile, Rama Khan’s paranoia about getting unseated by the Powers That Be led him back to Acrata, whose magic was just what he needed to activate a massive volcano and remain in his bosses’ good graces. When her attempt to cut ties with Leviathan proved unsuccessful, Acrata then risked her life to send a personal message to the DEO, warning everyone of Rama Khan’s destructive plan.

That’s when Supergirl‘s various runaway trains began colliding, so to speak. While Kara and J’onn teamed up to stop Rama Khan from enacting “Pompeii 2.0,” Alex and Brainy prepped Malefic to combat Myriad. Unfortunately, J’onn’s brother’s psychic powers came up just shy of what was needed to best Lena, forcing the DEO to shut off Malefic’s psychic inhibitor.

Not only was this newly uninhibited Malefic able to successfully stop Myriad, but J’onn and Acrata also helped Kara get the upper hand in her scuffle with Rama Khan. She even got to deliver a positive message (“People can change — that’s what is so beautiful about this world!”) before sending him running back to Leviathan with his ancient tail between his legs.

And remember how we told you that Hope would prove to be an “invaluable asset” to Lena this week? That tease came to fruition when the FBI stormed Lex’s bunker, only to let Lena go free because Hope agreed to take the blame. (As much as I wanted to see Lena brought to justice, we wouldn’t have gotten her and Kara’s emotional montage at the end of the hour, and that’s not a price I was willing to pay.)

Speaking of things coming to fruition, this week’s episode finally brought Supergirl into the “Crisis on Infinite Earths” fold. Upon sending Malefic back home, J’onn received an ominous visited from the Monitor, who confirmed that he was the one who released Malefic from the Phantom Zone in the first place. “When I saw you fight in ‘Elseworlds,’ I could see you are a great warrior, one plagued by his past,” he explained to J’onn. “That made you vulnerable. Now that you have faced those demons … you are ready.” Ready for what, you ask? Why, “a crisis,” of course!

Then came “Crisis” tease No. 2: The Monitor’s next visit was to (gasp!) Lena’s brother. “I brought you back because the universe will need a mind like yours,” he told Lex. “The time has come for you to fulfill your destiny, Lex Luthor. You can now become the hero you have longed to be.” Naturally, Lex was ready with a sassy response, saying, “I’ve always been the hero. … Happy to help. But first, we have to discuss my sister.” (Gulp.)

Lastly, we got a peek at Tom Cavanagh, presumably playing DC Comics character Pariah, in Central City on Earth-1. “For so many years, I’ve travelled across worlds — across the multiverse — to do one thing: kill you. And now, here, you saved my life.” The mysterious being with whom he was speaking tells him to “begin your life anew,” offering him untold knowledge.

Your thoughts on Supergirl‘s midseason finale? That “Crisis on Infinite Earths” tease? Grade the episode below, then drop a comment with your full review.