Before the Arrowverse’s best and brightest team up to save the world(s), Supergirl is dealing with an equally devastating crisis: Kara and Lena’s sunken friendship. When last we saw the embattled besties, Lena was encasing Kara in a prison of ice — a metaphor for their frosty new dynamic.

“That scene was a culmination of Lena’s story this season,” Katie McGrath tells TVLine. “Imagine what it would feel like to suddenly realize that everyone has believed the worst thing that you’ve thought about yourself — your deepest, darkest fear. She’s been pretending that she’s angry this whole season, but she’s not angry, she’s hurt. She’s falling apart in pain, and what you saw in Episode 7 was the moment Lena finally broke.”

Below, McGrath elaborates on Kara and Lena’s falling out, including her theory about the “leap of faith” required to bring them back together:

TVLINE | I have to start by giving you kudos on your performance last week.
Thank you! It was a long day to film that, and part of me thinks I’ll get PTSD if I watch it again. Melissa [Benoist] is such an astonishing actress, so I feel like I’m just trying to keep up with her most of the time. Her performance in that scene was heartbreaking. It was a day, is basically what I’m saying. It was a day. 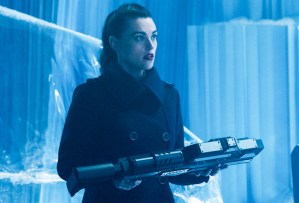 TVLINE | Had you ever been on the Fortress of Solitude set before? That must be surreal.
No, I’d never been on it! It’s so iconic. It’s one of those sets that you walk onto and you really feel like you’re stepping into a bit of DC history. All of a sudden, you’re part of this story that stretches back all these years. That set does it more than any of the others, I think.

TVLINE | I saw some people tweeting that they saw shades of [your Merlin character] Morgana in Lena in this week.
[Laughs] I can’t help it, I keep playing all these wonderfully powerful women who are a bit broken. I don’t know what it is about me that I keep getting cast as these characters who are emotionally broken but outwardly strong.

TVLINE | How would you describe Kara and Lena’s relationship at the moment?
They are on two sides of a precipice, and the only way for them to fix it is for one of them to jump and try to get to the other side. One of them has to do it.

TVLINE | I have to be honest: As much as I want them to fix things, it’s really entertaining to watch them at odds.
It’s delicious, I know. What’s so lovely about Kara and Lena is that we had years to build up to this. It’s not often on a TV show that you have the luxury of time. It’s been a privilege to be able to tell this story slowly. There’s such a weight and such a resonance because it’s taken us so long to get here. 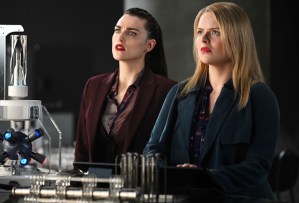 TVLINE | Looking ahead to Sunday’s midseason finale, the synopsis says that Hope becomes an “invaluable asset” to Lena. How has it been working with Andrea Brooks in this new capacity?
Andrea has always and will always be an invaluable asset to me. If you ever want to talk about a real superwoman, talk about Andrea being eight months pregnant and working as a series regular on two shows. That woman is unbelievable. And I don’t think anyone else would have been been able to transfer from Teschmacher to Hope. In the hands of a lesser actress, it wouldn’t have been as compelling.

TVLINE | So much of Lena’s anger relates to Lex’s death, but we’ve seen from the crossover trailers that he’s alive and well. How might Lena react to that discovery?
Well, you’re supposing that he’s going to be fine. It’s the crossover, so anything can happen. There are five episodes to tell that story, so we don’t know what’s going to happen. It’s a whole new idea, a whole new world, so any presumptions are maybe misplaced.

TVLINE | I’m a little scared for this crossover.
[Laughs] A lot of us were scared going into it. We saw the scripts, and we were like, “Oh my God, they’re trying to kill us all.” I have never had so much respect for the Number Ones on the shows. I’m like, “How do you do this?”

What are your hopes for Lena and Kara’s friendship as we head into Sunday’s midseason finale (The CW, 8/7c)? Drop ’em in a comment below.