The Flash vet Tom Cavanagh will be taking on yet another character as part of the “Crisis on Infinite Earths” crossover, it was revealed during the CW hit’s San Diego Comic-Con panel on Saturday.

The versatile actor will portray Pariah, a DC Comics character whose unorthodox experiments to view the creation of the universe result in the Anti-Monitor (to also be played by “Elseworlds” guest star LaMonica Garrett) learning of the existence of his Earth and destroying it with waves of anti-matter. 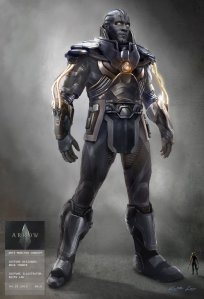 Pariah will emerge as a result of a “very, very big twist at the end of the Bloodwork case that launches ‘Crisis,'” new showrunner Eric Wallace teased. (Bloodwork, aka Dr. Ramsey Rosso, is the new Big Bad, to be played by Heroes vet Sendhil_Ramamurthy, in the first half of Season 6. The back half of the season will feature a different, self-contained Big Bad story.)

Outside of the crossover, Cavanagh this season will play a new version of Wells, whom the actor described as “a bit of an adventurer, a swashbuckler.”

Other highlights from the panel Q&A:

* Barry and Dr. Rosso, who has been dubbed “the most terrifying foe that team Flash has ever faced,” will have a “unique relationship. They’re both facing something horrible as ‘Crisis’ approaches,” Wallace said. Speaking of the upcoming crossover, Flash front man Grant Gustin shared that The Monitor shows up this fall and “says the universe is in danger and the only way to save it is for Barry to sacrifice himself.” That news weighs “pretty heavily” on Barry, Gustin added. “It’s tough hearing you’re supposed to die.”

* Wallace described Season 6 as the “season of thrills and chills,” while Gustin noted it has a “more adult” tone. “It feels like the show has matured. I can feel it getting darker. But we’re still The Flash,” Gustin added.

* Fans will get to see Killer Frost in S.T.A.R. Labs and “trying to live a life,” Danielle Panabaker shared. Meanwhile, her newly powerless pal Cisco has found “the normality that he was aching for,” Carlos Valdes said. “We’ll see the rewards that he’s reaping [in terms of] being able to balance his work life and personal life.”

* Barry and Iris will be dealing with the loss of their daughter Nora in “different ways” as he “tries to bury it and distract himself with what he can do to help the team and the city,” Gustin previewed. Added Candice Patton: “Maybe they’re not dealing with it in the best ways,” when they “have to grieve this as a team, as a married couple.”

* Barry’s new Flash costume, which features a completely new cowl, is “the closet it’s ever been to looking like the suit from the comics,” Gustin said.

The Flash Season 6 premieres Tuesday, Oct. 8, at 8/7c on The CW, where it will be followed by Arrow‘s final season beginning Oct. 15. Watch trailer below: