Thinking back, we really should’ve figured it out from the start. Though you could barely make out Blake Stadnik‘s face in his inaugural This Is Us scene, he entered the show in a manner similar to the way his on-screen grandfather did in that Terrible Towel moment way back in the series’ premiere: tush first. 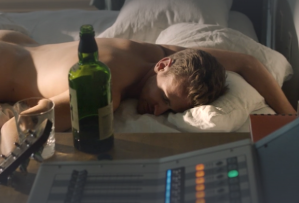 Stadnik’s first episode, the Season 4 premiere, held some large reveals. First, we discovered that Stadnik’s character — like the actor who plays him — is legally blind. Then, the drama revealed that the musician we watched fall in love with a waitress, build a career as a singer/songwriter and eventually perform before a sellout crowd was the grown-up version of Kate and Toby’s son, shown in another of the show’s signature flash-forwards.

Stadnik was in a Colorado production of Guys and Dolls when he nabbed the part. “My first thought was definitely, ‘This is unbelievably exciting.’ And then probably my second or third thought was, ‘Oh my God, I hope I don’t screw this up!'” (“It was quite a trial by fire for him,” series creator Dan Fogelman said at the start of the season, “and he blew us away in every possible way.”)

Future Jack showed up again recently in This Is Us‘ fall finale, when the rockstar and his pregnant wife Lucy (played by Auden Thornton) celebrated a future Thanksgiving, complete with Uncle Nicky’s shrimp appetizer. While the show is on hiatus, we jumped at the chance to speak with The Ghost of This Is Us future about adjusting to the hit series, filming Jack’s “surreal” concert in the season premiere and making his TV mom proud.

TVLINE | I remember Dan Fogelman saying that they yanked you out of Guys and Dolls.
Yeah. I was doing Guys and Dolls at a regional theater in Aspen, Colo., and I had to leave to go be on This Is Us.

TVLINE | And you didn’t have much prep time between the two. Tell me a little bit about kind of that. Was it like a whirlwind? How many days are we talking between things being finalized and you being on set?
I found out probably two-and-a-half weeks before I started filming. And I had to stay in Colorado until they could find a replacement for me in the show. So, I had this super-exciting news and I was ready to go on this incredible next step in this journey, and then I had to stay there and do Guys and Dolls. [Laughs]

TVLINE | What role were you in in Guys and Dolls?
I was in the ensemble, just dancing and being a gangster. Then I flew in on the seventh, then we started shooting within a couple of days. We did a lot of costume fittings and haircuts and makeup tests, and we had to really get the look of who Jack was.What is this rock star going to look like in the year 2043? And then, I also was in conversations with Dan and Ken [Olin, executive producer] about what he is like as a person, his personality. Even though he has a disability, he is just a cool, calm and collected guy who has been instilled with such confidence, and that’s what I try to bring to the character.

TVLINE | I know you’ve met Chrissy Metz and Chris Sullivan. Have you chatted with them about the Damon family and where Jack is headed?
We haven’t had a ton of opportunities to talk because what we’ve seen of Jack so far has just been with Lucy. So, our paths don’t cross that much on set. I was there for that first episode for quite a few weeks. I got to meet Chris a couple times, and Chrissy. And I showed Chrissy, in the makeup trailer, the video of the concert scene, and she started to cry. She said, “I’m not even your mom, and I’m so proud!” [Laughs] The first time I met Sully, I was in a costume fitting and he knocked on the door and he poked his head in, and he goes, “Hey, I’m Chris. I’m your dad.” Then he walks over and gives me a big bear hug. 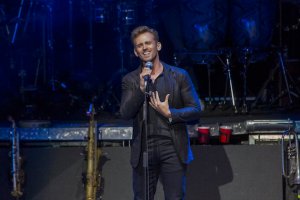 TVLINE | You mentioned the concert where you performed “Memorized.” We know it was a Chicago concert that you filmed at, during the intermission.
Yeah. My band and backup singers in that scene are Chicago. [Laughs]

TVLINE | From what I understand, you can see some light and shadows and things like that. I’m wondering what could you see when you were up on stage, looking out?
The spotlights were so bright, it’s kind of all I could see, and I could see some lights at The Greek [theater]. The sound was fascinating. I walked on stage with the camera behind me and then I stopped at the mic, and it pans around and our [director of photography] who was on the camera with me on stage, and he was going to come right to my left, and I was supposed to step forward and say my name. I can’t see when he’s going to get there, so he was just going to shout my name. He was two feet away from my face, and the audience was so loud, I could not hear him yelling my name at me on that first take. The energy coming at me from that audience was extraordinary, and the adrenaline flowing through my veins at that point it was just…I can’t even describe the experience properly. It was so surreal.

TVLINE | We saw you and Auden in the Thanksgiving scene in the fall finale. If you had your choice, what would be the next moment you’d want to play out in Jack’s life?
Well, we saw Lucy tell him that they were having a baby, and now in the Thanksgiving scene she’s six months pregnant. So I think it would be really wonderful to see him become a father, and to see him holding his child in his arms.