Warning: This post contains major spoilers for This Is Us‘ Season 4 premiere.

Kids grow up so quickly.

It happens even faster when you get a peek at what their lives will be like when they’re adults, like This Is Us did to Baby Jack in Tuesday’s Season 4 premiere.

Snatches of story throughout the episode showed an unidentified blind man as he botched breakfast, fell in love with and married a diner waitress, composed a song inspired by their first interaction and became a singer capable of selling out venues. What we didn’t find out until the final moments of the hour: All of those scenes took place within a flash-forward, and the blind man in question actually was the grown-up version of Kate and Toby’s son, Jack. (Go here for a full recap of the hour, including the moment in which present-day Toby and Kate learn their infant will never see.)

“We’ve always known for a while now that Kate’s son was going to be born prematurely, and blindness — retinopathy — is a very common thing that would come from that,” series creator/showrunner Dan Fogelman told reporters Tuesday. He added that while Jack’s stardom (not to mention his impending fatherhood) make him a compelling character to follow, “It’s a difficult period to go to all the time, because we’re pretty deep into the future, and it presents production challenges. But we do plan on returning to it.”

Read on as the executive producer answers your burning post-premiere questions, starting with:

WHEN DOES ROCKSTAR JACK’S STORYLINE TAKE PLACE? | In the NBC series’ already-established flash-forward, Rebecca’s family gathers at what appears to be her deathbed. “Jack would be approximately 12 years old in that period you’ve been at with Rebecca,” Fogelman explains. “What you’re seeing [in the Season 4 premiere] is about 10 years-plus after that.” 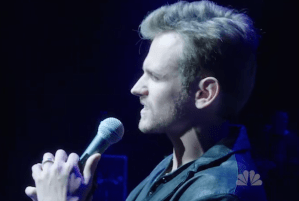 WHO’S PLAYING ROCKSTAR JACK? | Musical theater actor Blake Stadnik portrays Jack Damon as an adult; Fogelman said locating a blind actor who could sing and was right for the role was quite the task: “We wanted to find an actor who could be a leading man and very handsome and very funny and look great with his bare ass on national television, but also be able to go stand in The Greek [Theatre in Los Angeles] in front of a live audience and actually perform a song. So there were a lot of boxes to check.” Stadnik had never acted on camera before, and his first day of shooting “was literally lying completely naked in bed, then having a six-hour makeout scene with a young woman who was lovely opposite him, and then going on stage at The Greek in front of thousands of people during an intermission of a concert to perform a song,” Fogelman says, laughing. “It was quite a trial by fire for him, and he blew us away in every possible way.”

WHAT’S THAT ABOUT INTERMISSION AT A CONCERT? | Fun fact: Stadnik’s episode-ending song was shot during down time at a Chicago concert.

WHAT DOES THE NEW TIMELINE MEAN FOR THE END OF THE SERIES? | Last year, Fogelman told the audience at an Emmy consideration event that he’d already shot parts of the series’ final scene, and that he and his writers “know where it ends, and we have a path for each season of the show.” The peek into Rockstar Jack’s adulthood apparently doesn’t change any of that. “When we talk about the endgame of that future story that’s already been established with [Rebecca’s flash-forward], it’s where the story for our Pearson family — the immediate family of The Big Three — heads towards,” the EP said. “But it doesn’t mean [that flash-forward] is the endgame in terms of timelines.”

Have thoughts on This Is Us‘ season premiere? Sound off in the comments!