Charmed is finally giving its fans the “Parkerita” fix they’ve been desperately craving. Following a six-episode absence from the CW drama, Nick Hargrove returns as Parker Caine on Friday (8/7c), and it looks like Maggie is ready to welcome him back into her life with open arms.

We last saw Parker leaving Hilltowne at the end of Charmed‘s first season finale. “After everything we’ve been through, you can’t leave,” Maggie pleaded. “There has to be a way for us to be together.” Parker offered a solution (“What if you come with me? Let’s both get out of this stupid town!”), but Maggie refused, instead making him promise that he’d come back after getting his demonic side under control.

Of course, another layer of drama has been added to this reunion since Parker made that promise; we recently learned that the Charmed Ones’ new witch-demon associate Abigael (played by series regular Poppy Drayton) is the daughter of Alistair Cane, making her Parker’s half-sister.

Per the official synopsis for Friday’s episode, “Harry and Macy make a startling discovery, Maggie teams up with Abby against an unlikely foe, and Mel must save Kat from an uncertain fate.” (Here’s hoping Parker doesn’t turn out to be that “unlikely foe.” This reunion is supposed to be a happy occasion!)

Check out another exclusive photo of Maggie and Parker’s reunion below, then drop a comment with your thoughts. 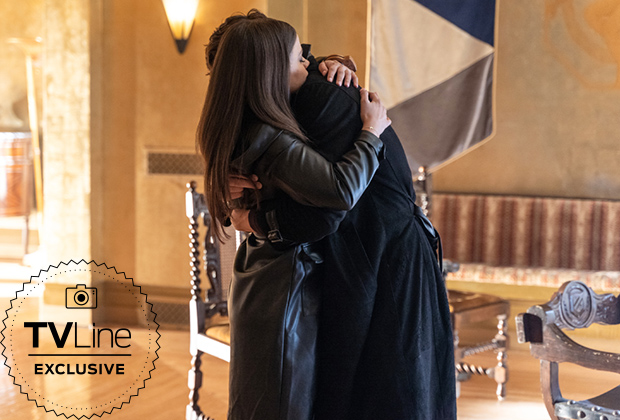