Forget the turkey. This Is Us‘ Season 4 Thanksgiving episode gives us something far meatier to chew on during the winter hiatus: a short but troubling flash-forward that cements Rebecca’s dementia storyline. (Oh, and the ep also serves up copious amounts of shrimp. But we’ll get to that in a moment.)

The Pearson family’s holiday gathering is even more complicated than it normally is, “with all the birth moms and long-lost uncles” — as Beth puts it — in attendance. But running underneath everything is Randall’s mounting worry that his mother’s memory problem isn’t the mere annoyance she claims it is. And unfortunately, that concern is borne out by the end of the hour… which hops us nine months into the future and dishes out a few more surprises along the way.

Read on for the highlights of “So Long, Marianne.” (And makes sure to check out what co-showrunner Isaac Aptaker had to say about the pain-packed hour.)

THE SHRIMP STORE CALLED… | We’ll start way back, when Jack and Nicky were kids and Thanksgiving was a cavalcade of drunken yelling, courtesy of their dad and his dad. The holiday doesn’t look much different years later, when young adult Jack approaches the house to find young adult Nicky smoking on the porch just to avoid everyone inside. “You wanna split?” Jack says, dropping the pie he brought, ringing the doorbell and running. After a beat, Nicky follows him.

It’s about a week before Nicky’s draft drawing, and he’s feeling rather fatalistic about the whole thing. So much so, in fact, that he bets big on a football game just to spite their dad… and wins a pile of cash in return. So Jack and his brother wind up at a fancy restaurant, where they order the largest cocktail shrimp platter they can find — five pounds’ worth, as it turns out — and spend the money with glee. 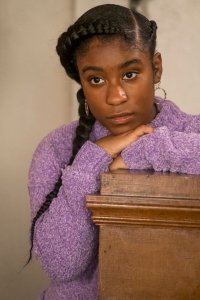 BAND-AIDS DON’T FIX BULLET HOLES | In Philadelphia, the Pearson home is a whirl of early Thanksgiving Day activity. Deja keeps changing outfits before her mom shows up. Rebecca answers Randall’s questions with frosty, one-word answers. Beth urges Randall to make up with his mom, but when he tries, it doesn’t go well. She tersely replies that she needs space and is going to take a walk and maybe see a movie, and that she’ll be back for dinner. “And I would appreciate if you kept this little argument of ours between us,” she says, grabbing her purse. Randall quietly agrees. Rebecca says she’ll bring home a pie, then takes off.

Meanwhile, Toby, Jack and Kate are on a plane en route to Pennyslvania. Tobes can’t stop looking at his phone. “My Crossfit group text is going crazy for Jack’s first solid food video,” he says, stuffing more insufferability into one sentence than I’d previously thought possible. For reasons I do not understand, Kate feels the need to then confess to her husband right then that his avocado moment with their son was a sham. He gets mad and they argue. “So it’s my fault you fed him an avocado and lied about it because I was at the gym,” he snips. But they quickly smooth things over, saying they’re both tired and forgiving each other… kinda.

ROAD TRIP! | Nicky, wearing a “newly sober chic” sweater and khakis, accompanies Kevin to Philadelphia. But he’s got reservations about whether he’s doing the right thing, and he doesn’t feel any better when he gets to Randall’s place and realizes he isn’t in any of the family photos from the past several decades. His discomfort grows, and when Randall realizes they left the box of Thanksgiving accoutrements (Pilgrim Rick hat, etc.) at their old house, Nicky volunteers to accompany Randall and Annie on the two-hour drive to go get it.

“Why haven’t we met before?” Annie asks her great-uncle when they arrive at her hold house. “Because your grandfather erased me,” he says bitterly, later telling Randall that the holiday visit is “too much” for him to handle. After retrieving the box from the house’s new owners — who also return a CD folder they’d left behind — Randall and his passengers listen to Leonard Cohen’s “So Long, Marianne” on the way home. Randall remembers how Jack used to explain the lyrics in detail, and it turns out he was quoting Nicky’s explanation of the lyrics from way back when. Nicky cries a little, his face turned to the window, then pulls himself together and asks Randall if they can make a stop before they get to the house. 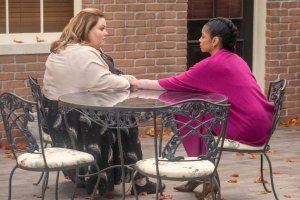 HI, SHAUNA! | Speaking of which: Beth is holding down the fort with Miguel when Shauna shows up very early. It’s a pleasant surprise that Deja’s biomom is doing well: She’s clean and has a job, friends and a new apartment. She even made pineapple upside down cake for the meal. So Beth feels like a horrible person that she’s upset about Shauna’s success: If Shauna isn’t a mess, what’s Beth’s role in Deja’s life? She confesses as much to Kate, who confesses in return that she’s an evil person, too: “I hate CrossFit Toby,” she sighs, adding that she feels left out that he went ahead and lost weight and she didn’t. Beth counsels her sister-in-law to tell Toby how she feels, because going to people outside your marriage about problems inside your marriage “can be dangerous territory.”

But when Kate goes to raise the issue with her husband, she chickens out. Meanwhile, when Deja is sad that her mother was able to get herself together — but not in time to keep their family together — she cries, and Beth comforts her.

HAPPY THANKSGIVING! | After Kevin and Tess go on a little outing to help her come to terms with coming out via her social media accounts (she does, and it goes well!), they return and everyone — minus Rebecca — hang out before the main meal. That’s when Nicky presents his contribution with great fanfare: Five pounds of shrimp on ice. He says that the Thanksgiving he and Jack ate crustaceans with abandon was the best one ever, and his appetizer is a tribute “for Jack, my brother, and to new family traditions.” He’s almost crying. It’s sweet. And then, in the briefest of flash-forwards to the Rockstar Jack storyline, we see Kate and Toby’s son and his pregnant wife putting out five pounds of shrimp on their own Thanksgiving table. Aww.

On the side, Nicky tells Kevin he doesn’t need him to return to Bradford — but he promises he’ll call if he needs him. And then Kev shares with Randall that he’s got a plan: “By the time I’m 40, I’m gonna have a wife, a kid, the whole shebang.” Randall reminds him that the milestone is in nine months, and they laugh.

Hope you had your fill of heartwarming uplifting storylines! Because the rest is bleak going, folks. 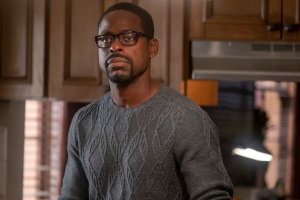 NOT SO HAPPY THANKSGIVING! | Throughout the episode, when we check in with Rebecca, she’s often disoriented. At one point, she sees a man she thinks is William circa the time she met him, then she’s a little agitated when she approaches him and realizes he’s not. She goes to buy a dessert but gets distracted by some pretty flowers, forgets about the cake and purchases the blooms instead. And she leaves her phone at the cash register, which causes problems later when she eats lunch at a Chinese restaurant and can’t find her cell. She gets so upset that the restaurant calls the police, who escort her… to the cabin?

When she enters, we realize that almost everything we’ve seen of her story in this episode has been another flash-forward: It’s nine months after Thanksgiving, and the day of The Big Three’s 40th birthday. Kevin, Kate and Miguel are there and are relieved to know she’s all right; it appears that whatever is going on in Rebecca’s brain has gotten markedly worse since the fall.

In other future news: Kevin has a fiancée (!) who is pregnant (!!), though we don’t see her or know who she is. And Randall and Kevin apparently aren’t speaking.

In the present, however, Rebecca returns home with a pie. She was at a movie and her phone was off, and she seems fine. Randall happily tells her he’s glad she’s OK… and that’s when she whispers that she was a few minutes into the coming attractions when she realized she couldn’t remember what movie she was seeing. “I think I need to go see a doctor,” she says, then clasps Randall’s hand and joins the party while her devastated son processes everything in the kitchen.

Oh, I nearly forgot: When Kate grabs Toby’s phone to take a photo of little Jack in the Pilgrim Rick hat, she sees that he’s been complaining about her to his CrossFit friends — and one of the female pals in particular texts, “Don’t let her bring you down. Here for you.” Ugh. I don’t even know this woman, but I’m ready to give her a beat-down, AMRAP.

Now it’s your turn. What did you think of This Is Us‘ fall finale? Grade the episode via the poll below, then hit the comments and let us know!