Before we get into the worrisome aspects of This Is Us‘ fall finale, it appears congratulations are in order… or they will be.

Tuesday’s episode of the family drama included a peek into the Pearsons’ life nine months from now, around the time of The Big Three’s 40th birthdays. And in that mini-flash-forward, we learned that Kevin is engaged and his as-yet-unnamed-and-unseen fianceé is pregnant.

The revelation was a bright spot in a Thanksgiving episode that, on the pain scale, rivaled the Season 1 installment where Randall realized Rebecca had been lying to him about William for years. Throughout the hour, we watched Rebecca become increasingly disoriented and agitated while out by herself. At the end, after police escorted her home, it became clear that her walkabout took place during the time jump, as well. And in the present, she sadly admitted to Randall that she needed to see a doctor about the memory problems he’d noticed in the previous episode. (Read a full recap here.)

TVLine got This Is Us co-showrunner/executive producer Isaac Aptaker on the phone to break down the devastating hour. Read on for his thoughts on Rebecca’s future, Randall and Kevin’s upcoming “rift” and Toby’s terrible text.

TVLINE | Let’s start with the nine-month flash-forward, when Rebecca is brought to the cabin. What can you say about her dementia at this point?
Honestly, I can’t tell you very much, because I don’t want to get ahead of our storytelling. Quite literally, that’s a nine-month jump. Every year, our stories pick up on our characters’ birthday, so that’s a jump ahead for their 40th birthday, which is a jump ahead to our Season 5 premiere. So everyone’s questions about Rebecca and her status and how things have progressed will be answered by the beginning of next season, because we’ll have caught up to that very moment.

TVLINE | I’ve had someone in my family with dementia, and I recognized the pill-rolling tremor that Rebecca was doing with her hands.
I’m sorry.

TVLINE | Oh, thank you — I expect the next few seasons will traumatize me, but that’s not your fault.
[Laughs]

TVLINE | I was impressed by that level of detail, already with this storyline. Can you talk to me about the research that’s gone into Mandy Moore’s portrayal of what’s going on with Rebecca and the responsibility you might feel to the audience to get those details right?
Absolutely. Always, as writers and as storytellers, whenever we tackle an issue like this that’s medical or that has touched so many people’s lives in such an emotional way, we really want to get it right. For this one, I think it’s such a testament to Mandy and the work that she’s doing. She is equally, if not more, determined than us to be authentic here. Remember, this is a woman in her 30s who hasn’t even had a family yet who’s now playing a grandmother dealing with dementia and this onset of stuff that doesn’t happen until much later in life. It’s so far beyond Mandy’s own personal experience, so she’s doing so much work as an actor. She’s talking to experts. She’s talking to people who’ve been personally touched by this. And all those little details that she’s bringing to the performance are the result of that research and the work that she is doing to accurately portray this. It’s really blowing us away. 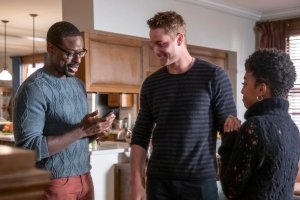 TVLINE | Among Miguel and The Big Three, might there be differences of opinion about how to handle Rebecca’s treatment and care?
Oh, absolutely. So many of the more anecdotal experiences from people who have come to speak to the writers, there’s always conflict and there’s always disagreement when it comes to care for a parent. And yeah, tensions do arise. They love her so much and they feel strongly about what happens to her, and that leads to conflict when there’s disagreement. For sure, that is likely to be in store for their family.

TVLINE | On a different note, Kevin has a fiancée who’s pregnant! Can we assume we’ll see the start of that this season?
Again, just keeping in mind that is their 40th birthday at the cabin that we flash-forward to, we have a history of every season starting with their next birthday. So that is all stuff we will be addressing in early Season 5.

TVLINE | The rest of this season will unfold in real time, then?
Yeah, relatively. We have so much jumping around in our show, that when we don’t keep our present-day stories more or less tethered to where we are in the calendar, our heads explode. [Laughs]

TVLINE | So the start of Kevin and Randall’s disagreement, we’ll start to see it play out near the beginning of the second half of this season?
Yes. It’s definitely something that by the end of our season, we’ll understand what the rift is between those brothers.

TVLINE| Might it have something to do with Rebecca?
It’s possible.

TVLINE | It didn’t escape my notice that when Toby got that text that Kate saw, it wasn’t just from one of his CrossFit friends, it was from someone named LadyKryptonite5, I believe. And that adds a whole other layer of hurt to the situation: It’s another woman commenting on his marriage, and Beth had that speech earlier about how you shouldn’t go outside your marriage to fix your marriage.
Yeah.

TVLINE | The fact that we don’t see Toby and Jack at the cabin for the birthday, put together with that, made me worry. How’s their marriage doing when we come back?
You’re right: That’s a scary moment. It’s not a good feeling when you find out that your significant other, your spouse has been complaining about you, venting about you to his friends. It’s probably an even worse feeling when you see a woman responding and giving him support when he’s complaining about you. Our audience should definitely be unsettled by that moment in the same way that Kate is.

TVLINE | The brief scene with the grown-up version of Baby Jack: Did you have the actors come back? Or was that shot when you did the premiere?
No, we had them come back. They’re both so terrific and they loved doing [Episode] 401 this year, they were eager to come back, even for just a little moment like that. It was fun to get to have them back on set.

TVLINE | Beth mentioned earlier in the season that Randall is essentially one emotional crisis away from being back in a very bad place. With what’s happening with Rebecca, it seems like we’re on the verge of that big crisis. Can you speak to his trajectory as we move through the rest of the season? How fragile is he at this point?
We’ve seen over the course of the show that Randall has this pattern that he’s fallen into a number of times already. He soaks up stress, he soaks up other people’s problems. It builds and builds and builds. He doesn’t necessarily find the best outlet or the best way to deal with it. And then he implodes and has these breakdowns. Beth knows him better than anyone in the world and has been sensing this, and she’s brought up the subject of maybe going to see a professional to deal with it in a more responsible way and Randall is not open to that thought. So it definitely feels like he’s on the path toward another one of those implosions.

TVLINE | One last one: Why CrossFit for Toby and not, say, a Peloton bike or running or something?
[Laughs] That’s funny. I think so many of us in the writers’ room bought those Peloton bikes and then never used them and just watched our money burn away. What’s something that you actually get out of the house and go do every day? Everyone we know who’s in CrossFit gets really addicted to it. It’s the thing that would get him out of the house and cause him to have this separation from his wife and his child, and also people get really absorbed in that world, and it becomes so all-immersive and that would cause a bit of trouble for him and Kate.