Margaret Booth may not have lived to be AHS: 1984‘s final girl, but she still played an unforgettable role in Wednesday’s finale, one that cost her an arm and a leg. And another arm. And another leg.

“Ryan called me one day, and he said to me through laughter, ‘Well, we figured out what we’re doing to Margaret. We’re throwing her in a wood chipper!'” Leslie Grossman tells TVLine. “My first reaction was, ‘That is the single most perfect way for that character to meet her end.’ I think it was quite appropriate!”

Truth be told, Grossman is oversimplifying her character’s demise. Camp Redwood’s glamorous-yet-villainous director wasn’t just tossed into a wood chipper — not in one piece, anyway. The vengeful spirits of her victims began by severing each of her limbs from her torso, chipping away at her in pieces.

“It was as horrible as you could possible imagine, but isn’t that what she deserved?” Grossman says. “Let’s be honest here.”

Below, Grossman elaborates on the events of AHS: 1984‘s surprisingly upbeat finale, including her thoughts on Brooke and Donna sharing the title of final girl. 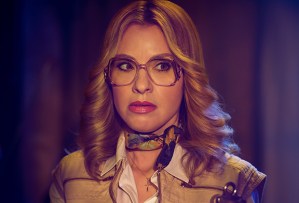 TVLINE | You said Margaret had this coming, and I agree, but I liked her.
You know what? People were great to me this year. Like, really lovely, and the feedback has been overwhelmingly positive. The main thing people said was, “I love you and I hate her,” which means I was doing my job. You need characters like that to meet a horrible death. She’s so terrible! People have asked me if she had any redeeming qualities, and she really did not. I don’t think there was even a place for a redemptive storyline for Margaret. She needed to be put down in the most violent of ways. She really had it coming, didn’t she?

TVLINE | Your presence on Horror Story has increased steadily over the past few seasons, which is exciting. Does that come with any added pressure?
Only pressure in that I always want to do the very best that I can. I’m very aware that Ryan Murphy has given me a gift, and I want to make sure that I make the most of the opportunity that he’s giving me. So I’ve only felt pressure from myself, but I’ve been fortunate enough to be surrounded by unbelievable actors. And everybody says this about their own show, but I know we have the best crew in the business. On Ryan’s shows, the hair, the makeup and the wardrobe are so integral, so all of those things were like scaffolding for me to lean on. My job is just to not f–k it up.

TVLINE | We got a much happier ending than I was expecting. What did you think of the way these stories wrapped up?
I loved that Donna and Brooke shared the final girl status, and I thought it was so lovely that Jingles got a redemptive storyline. I loved that combination of camp and gore and shock and horror with — for lack of a better term — a lot of heart. I thought we needed that lovely ending. I was glad to see that Montana found love. It was such a nice ending, even if it also had someone going through a wood chipper.

TVLINE | In your mind, will the ghosts remain trapped at camp forever? Or will someone come along and save them someday?
In my mind, the ghosts will live on in Camp Redwood. The show still does so well, and I could see it going on for years and years, so it would be a lot of fun to go back and revisit those ghosts down the line and see what’s going on there. 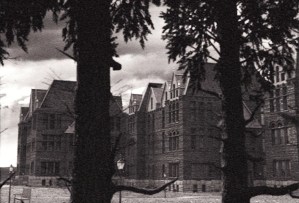 TVLINE | Never say never. This season is connected to at least one more.
Yes! And I love that Margaret owns properties from [Asylum]. I love how they weave in all those little Easter eggs.

TVLINE | Speaking of weaving, Margaret had some really outrageous looks this season. Did you have a favorite?
That’s a difficult question. I really loved the 1989 iteration of Margaret. Ivana Trump was very much the mood board. It was Dynasty and Ivana Trump. Lou Eyrich oversees all of the costuming, but Paula Bradley was the one who executed it this season, always under a time crunch. I don’t know how she did it. All of the stuff I wore was vintage, except for the pink coat I got killed in, because we needed multiples for all the stunts. … I thought that the camp outfit was perfect for Margaret, but I’m not going to miss those high-waisted pleated shorts and knee-high socks. Those I’m very happy to say goodbye to, even though they served a purpose for the character.

TVLINE | You also got a lot of the best lines. Do any spring to mind?
As per usual, Ryan made sure I had the most fun things to say. Nearest and dearest to my heart was, “They’re dead, Courtney! Kajagoogoo is dead!” I think that’s what it was. I couldn’t look at Leslie Jordan in that scene. Actually, I couldn’t look at him in any of the scenes we did together, because he’s so funny.

TVLINE | I loved Courtney! I didn’t know he was going to be in this season, so I was very excited when he appeared.
I didn’t know he was going to be in it this season until I saw the pictures from his fitting. I was like, “Wait, that’s who’s playing Courtney?” I literally jumped up and down, like a child. His Beverly Leslie on Will & Grace is one of the true great comedic performances ever on television. And he is even better when you meet him. That’s the thing about working in the Ryan world, you get to work with all these people you’ve admired for so long.

Your thoughts on AHS: 1984‘s surprisingly happy ending? The season as a whole? Whatever’s on your mind, drop it in a comment below.