American Horror Story‘s 100th episode scared up a few celebratory surprises on Wednesday, including a fun connection to a previous season, the return of a fan-favorite performer and, of course, more twists than you could shake Trevor’s baby elephant trunk at.

The episode began with a flash-forward to 1985, where we joined Richard and Jingles’ killing spree already in progress. Jingles was beginning to question their murderous way of life, and in a perfect world, I feel like the two serial killers could have settled down Bert and Ernie-style in a nice quiet suburb. Sadly, Richard’s bloodlust — much like Ernie’s — was simply too strong, so he forced poor Jingles to keep cracking skulls. That is, until Jingles got the brilliant idea to expose Richard, resulting in him getting beaten to bloody pulp in the city streets by a mob of angry citizens. 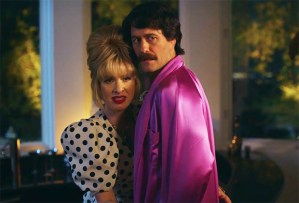 We then jumped to 1989, at which point things got truly insane. Like, coked-up Dynasty levels of crazy. While Xavier and Montana were gleefully murdering anyone foolish enough to stumble into Camp Redwood, Margaret was building a real estate empire by turning infamous horror sites — including Briarcliff Manor! — into profitable tourist attractions. And Trevor, who apparently survived his brush with death, agreed to marry Margaret and reap the benefits of the good life. Besides, as Margaret pointed out, “They can’t make you testify against your spouse.”

That’s when the show’s 100th episode blessed us with a familiar face: Leslie Jordan (as Margaret’s assistant Courtney) arrived to inform his boss that Brooke lost her last appeal and was set to be executed. And speaking of familiar faces, who did Brooke reunite with in prison? Why, none other than Richard, who was horrified to hear what Brooke had done to Montana. “I gutted that bitch from the inside out,” she told him, “and now she’s in hell, licking Satan’s balls.” Richard’s response, naturally, was that that Montana “should be so lucky!”

Richard threw Brooke a lifeline of sorts, explaining that she could survive her trip to the electric chair if she agreed to accept Satan as her master. (A fairly simple exchange by American Horror Story‘s standards, if I’m being honest.) But Brooke refused his offer with a simple “f–k off,” leaving her to walk the green mile without an assist from the man downstairs.

Before receiving her lethal injection, Brooke took one last opportunity to confront Margaret — whom she correctly assumed was watching from behind the two-way mirror — and offered a friendly warning: “You are going to burn for wanting to watch me die.” (Yeah, for that and the million other atrocities she’s committed.) But Brooke’s plan to die with dignity was sidelined by Donna, who snuck into the facility and brought her back to life in the episode’s final moments.

Meanwhile, Margaret took advantage of the recent murders at Camp Redwood by returning to her old stomping — er, stabbing — grounds to throw an expensive food and wine festival for rich, thrill-seeking idiots. In addition to a performance from the one and only Billy Idol, guests were also promised “plenty of spooky and bloody surprises.” (Um… Can someone please explain to me how any of that was a draw?)

Now let’s go back to Mr. Jingles, who managed to do a full 180 with his life, starting anew in Alaska with a wife and son. He assured his new bride that he had moved on from the events of Camp Redwood, that he was free. Or so he thought. After coming home one night to find his wife murdered — possibly by Richard, who received a ‘get out of jail free’ card from Satan — Jingles snapped. He dropped the baby off with his wife’s sister, muttered something about how darkness will always follow him, then stumbled off into the night in full serial-killer garb. You know, just another casual interaction between in-laws.

What did you think of American Horror Story‘s 100th episode? Grade the milestone hour below, then drop a comment with your full review.