Remember the death that A Million Little Things executive producer DJ Nash teased at the start of this season? It (probably) happens in this week’s episode.

I hedge mainly because Nash is a wily creature — see also: Season 1’s Ashley situation — who may or may not kill off another character before Season 2 is over. I have no intel or anything; this is merely conjecture. But this week’s hour certainly features the passing of a character we’ve seen, which was what the EP foreshadowed back in August.

Who meets his or her maker? Read on for everything that takes place in “Goodnight.” 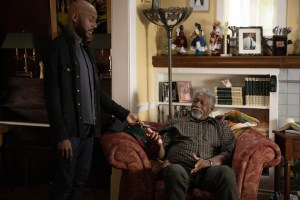 GOODBYE, RENEE | As Rome’s mom and dad prepare to go on their anniversary cruise, Rome grouses about how many errands they’re having him run. Rome’s brother, Omar, is around to house-sit; the siblings bicker about which kid their dad, Walter, always preferred. Regina helps out with the trip preparations by making a hair appointment for her mother-in-law, Renee… which means she’s the one who gets the phone call when something terrible happens.

Rome is mid-rant about how he and his father will never get along when he finally notices the stricken look on Gina’s face and asks what’s wrong. “Baby, your mom died,” she says tearfully.

Renee had an aneurysm, we learn, and went quickly and painlessly. Her husband, Walter, announces that he’s still planning to go on the cruise, in order to keep his promise to his late wife. And he wants to have her funeral before he leaves in a few days. Out of respect to the promise Rome made his mother — “The last thing Mom said before she walked out that door was that she wanted me and Pop to get along. That starts right now.” — Rome vows that he’s going to make the memorial happen before the cruise ship leaves.

A GRAVE SITUATION | So he does. Rome gives a touching eulogy at the graveside service, noting that he didn’t feel like anything was left unsaid between him and his mother. Everyone, including PJ, is there to support him; when the guys see Rome filling in his mother’s grave by himself afterward, they all grab shovels and pitch in to help him.

With that taken care of, Eddie turns his attentions toward Delilah. Earlier, Sophie mentioned that her mom might be taking their family to France for the summer. This worries Eddie, especially after Katherine points out that Eddie’s name isn’t on his daughter’s birth certificate, and therefore he has no legal recourse if Delilah decides to keep Charlotte abroad for good.

So he confronts Delilah, who’d already admitted to Regina that she felt “ganged-up on.” As you might imagine, it doesn’t go well. Back at the car, Eddie frets but Katherine reminds him that she’s a lawyer. “I make a living standing up for people. And right now, that’s you and Charlie.” He can’t believe his luck (honestly, neither can I — girl, I repeat: You are TOO GOOD FOR THIS ISH) but she puts her hand in his. “We’re in this together,” she reminds him. 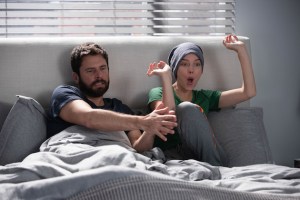 ‘ELLO GUVNOR | Let’s back up a bit. At the start of the episode, Gary and Maggie’s lazy morning in bed is interrupted by a call from Oxford University: Maggie applied for a fellowship there, and she’s made it to the next round. All of this is news to Gary, but he’s supportive… even though England and New England are very far away from each other. Later, he learns that she applied before she got sick — and got accepted — but had to turn it down when she was diagnosed. She’d reached out a few weeks before (which also is news to Gary) to see if maybe they had any room this time around, and when someone dropped out, she was back in the running.

What Maggie doesn’t know but Regina does, courtesy of the box of desk accoutrements she accidentally sees in Gary’s trunk: He was fired from his job. Regina urges him to tell Maggie the truth, but he doesn’t want to. “My bosses weren’t thrilled with how much time I took off this year,” he whispers, adding that he doesn’t want his employment woes to affect Maggie’s decision about the fellowship. So Regina reluctantly agrees to say nothing.

Back at their apartment, Gary decorates Maggie’s desk with British paraphernalia and buys her a brunette bob wig to show how supportive he is of her desire to take the fellowship (if it’s offered). That makes her happy, and she thanks him.

THE TRUTH WILL OUT | As Renee’s wake winds down, Katherine and Delilah warily try to stay out of each other’s way. But eventually, Katherine uses the legal line on D, as well, saying that the reason the Dixons were able to keep their house is because Katherine is a very good lawyer. “I know you’re a good lawyer, Katherine,” Delilah spits back. “I’m asking you to be a good person.” (Side note: I’m not #TeamDelilah on this one, but you’ve gotta admit: That was a great comeback.)

Rome drives his father and a very drunk Omar home. Rome and his pop wind up watching some family movies from when Rome and Omar were kids, and the old films help Rome realize that his father has had his back more often than he realized. “We have so much crap that we still need to work through,” he tells Walter, who agrees with him that they need each other.

Back at home, Rome tells Regina that he’s incredibly sad, but it’s not the same as when he was in the depths of his depression. Then he’s horrified to realize that the DNA test kit is missing from where he stashed it under the bed: PJ found it during the get-together! At that exact moment, Delilah (who is leaving Rome’s apartment) and Mitch (who is entering Rome’s apartment) run into each other in the hallway. A moment later, there’s a knock at Rome and Regina’s door. “PJ is Barbara Morgan’s son?” she asks, incredulous. “Why didn’t you tell me?”