A series of game-changing truth bombs were dropped on Thursday’s Legacies, from romantic revelations to supernatural secrets. Just another week at the Salvatore School.

This week’s episode introduced us to an ancient samurai warrior named Kurutta, who suddenly appeared in Mystic Falls’ town square after being absorbed by Malivore more than 700 years earlier. Kurutta had been possessed by an evil Japanese spirit known as an oni, which could transfer itself from host to host through a simple touch. For this reason, Kurutta vowed to avoid all human contact for the rest of his days — that is, until Malivore came along and ruined everything.

Kurutta’s supernatural-seeking sword led him to the Salvatore School, where Josie — who can apparently speak Japanese, hence the episode’s title, “Since When Do You Speak Japanese?” — promised to help him set things right. Their mission took them to Mystic Falls High School, where Landon and Rafael were already looking for Alaric to discuss the monster problem. (Well, Rafael might have also wanted to see Hope, a relationship Landon is fully behind… for now.) 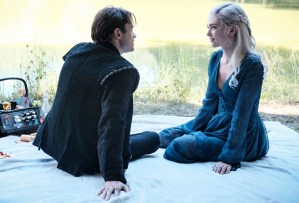 Meanwhile, MG set out to prove Sebastian’s invisibility to Lizzie, so he borrowed an old camera from the Salvatore School’s A.V. club (more on that later) and secretly filmed their lakeside picnic. Lizzie, whose mental health was one of the few things she could count on at the moment, lashed out at MG. “You and me, we’re not friends,” she told him. “We never were, and we never will be. So see this: You don’t exist to me.” Ouch!

Like anyone would in her position, Lizzie decided to drown her sorrows in ice cream, but her pity party came to a halt when she spotted Landon — possessed by the oni and wielding Kurutta’s sword — walking through the town square. She was able to stop him from reaching the portal to Malivore, but not without becoming possessed herself. When Josie and Hope eventually discovered Lizzie tied to a tree, she was already at her wits’ end, begging her sister to use Kurutta’s sword to put her out of her misery.

Despite vowing not to use any more black magic, Josie wasn’t about to kill her own sister. (She’ll save that for the merge, amirite?) By absorbing the power of the sword, Josie was able to expel the oni from within Lizzie, sending it back into Malivore where it belongs. (Kudos to Jenny Boyd on her acting in this scene, by the way. Playing possessed can often come across ridiculously, but she remained grounded throughout the entire ordeal.)

Hope made sure she was there when Landon returned to the living, at which point he asked why he always sees her when he dies. She had told him the truth about their romantic past earlier in the episode, but since he was possessed by the oni at the time, it seems he didn’t retain that vital information. Bummer.

In slightly happier news, MG bumped into Sebastian towards the end of the hour, though no one else in the room was able to see him. “I’m very real,” he assured MG. “And I need your help.” (Great, the only thing more tragic than Lizzie hating MG is having to watch MG repair her relationship with Sebastian. That guy cannot catch a break!)

Oh, and one more thing: Lizzie awoke from a deep sleep in the middle of the night with a shocking declaration — she remembers “Hope Andrea Mikaelson!”

* It’s been quite a day for fans of Kai Parker. Not only was it confirmed that Chris Wood will return to Mystic Falls in 2020, but tonight’s episode of Legacies gave us a hell of a Gemini Easter egg. Before MG used the Salvatore School’s outdated (and incredibly familiar-looking) camera to prove Sebastian’s invisibility, he saw a brief clip of — you guessed it — Kai. It was the video he recorded in The Vampire Diaries‘ sixth season finale, explaining the specifics of the sleeping spell he cast on Elena. For nostalgia’s sake, why don’t we all give it another look:

* I’m still not feeling Josie and Landon as a couple — let’s face it, they’re only together because everyone forgot Hope, much as I’d like to keep an open mind — but I’m surprisingly into the connection between Hope and Rafael. There’s a genuine sweetness there, and I’m going on record as saying I wouldn’t hate it if the show explored that relationship further.

* Speaking of relationships, Alaric assumed the worst when he learned that Sheriff Mac had a secret file on him, but was relieved to learn that she was merely investigating whether he was a good guy and/or a good father before she decided to ask him out! Let’s hope she has better luck than Alaric’s previous love interests — Isobel, Jenna and Jo — all of whom are now dead.

* The final moments of this week’s episode also revealed that there are now two scarlet-robed baddies roaming Mystic Falls. What are they up to? And who are they? Your guesses are as good as mine!