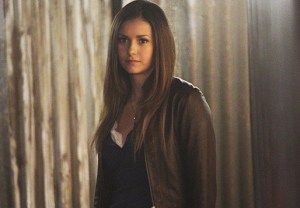 Ladies and gentlemen, Elena Gilbert has (pretty much) left the building.

Thursday’s Vampire Diaries marked Nina Dobrev‘s final episode as a series regular, and even though we’ve known this day was coming for months, nothing could have prepared us for the emotional sucker punch that was her fond farewell.

Here’s how it went down: Kai — who killed himself with Lily’s blood in his system, thus becoming a heretic — put a spell on Elena, linking her to Bonnie; as long as Bonnie lived, Elena would remain in a sleep-like trance. And if Miz Bennett attempted to find a loophole (TV witch buzzword!), they’d both die.

Team #Bamon managed to defeat Kai, but because waking Elena would mean killing Bonnie, the gang decided to keep her at rest. In a series of heartbreaking — and I mean absolutely rip-your-heart-out-and-stomp-it-into-pieces — sequences, Elena’s friends let her into their thoughts in an attempt to say goodbye… because they won’t be seeing her until Bonnie grows old and dies. (Or whenever the next big bad kills her, whichever comes first.)

Of course, Elena’s exit was merely one game-changing development introduced in the finale. Let’s do a quick rundown of the episode’s other major moments:

* As I feared, based on my less-than-hopeful interview with executive producer Julie Plec, our girl Jo did not survive her encounter with Kai at the altar. (Note to all future guest stars: Don’t. Date. Alaric.) 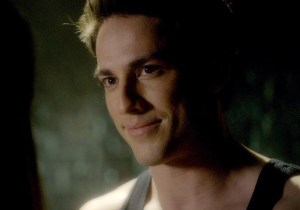 * Since she was certain to die anyway, Liv convinced Tyler to kill her in order to trigger his werewolf gene, transform and heal himself. To be honest, Luke’s angsty sister was never my absolute favorite, but watching Tyler suffocate his own girlfriend was brutal. (Bonus scoop: Find out where Tyler went!

* During a particularly jaw-dropping chat between Caroline and Stefan, he revealed that, in his mind, he and Elena weren’t meant to end up together. (“We loved each other, but she was also the only person I’ve ever met who believed my brother was worth loving,” he told her. “Her faith in him brought me and Damon back together. … I loved her more than I ever thought I could love somebody else, but I think in the end, I needed him more than I needed her.”) But in the end, everything turned out A-OK for #TeamSteroline. In fact, Stefan finally dropped the L-bomb on her! (So for those of you asked last week, our sweeps scorecard will be updated in the morning.)

* With Kai dead, his cloaking spell on the heretics was lifted, reuniting Lily and (Lor)enzo with their “family.”

* Lastly, a time jump: Not only did we see a heartbroken Damon struggling to live without Elena in his life, but we also got our first look at Officer Matt Donovan!

OK, TVD fans, how are you holding up? Weigh in on Elena’s exit — and the finale in general — below.