Are Walking Dead fans ready for a charming Negan? Who else is suiting up for the Arrow spinoff? Is Evil puzzling its viewers? What will be the fallout of Supernatural‘s big fight? Read on for answers to those questions plus teases from other shows.

Whatcha got on The Walking Dead? — Gary
If you’re a fan of Negan, Sunday’s episode of the AMC drama is can’t-miss. Not only does the episode “Bonds” reveal the highly entertaining way that the wannabe Whisperer reacts to being tested by Alpha, it features the stunning sight of the Saviors’ former leader doing something that he never before has. And it’s no exaggeration to say that Jeffrey Dean Morgan has rarely been more devilishly charming than he is here; he’s a hoot-and-a-half.

Will any other characters from Arrow’s 2040 storyline be included in the Green Arrow and the Canaries spin-off? –Matt
Charlie Barnett, who plays JJ/Deathstroke, told me that he appears in the backdoor pilot episode.

What do the numerals in Evil’s episode titles mean? [E.g. “177 Minutes,” “3 Stars,” “Rose390,” “October 31” and “790”.] Are they referencing bible verse, or tracking things? Does it tie into The 60 which has been referenced? Any idea when we will start connecting dots of the symbols David is supposed to write down? —Maureen
So many questions! But… maybe some of the answers are interconnected? As the Kings (aka the series creators) shared with Inside Line upon surveying your email, “There is a puzzle buried in each of the episodes except the pilot. The numbers have to do with solving this puzzle….” (And yes, that is their mystery-churning ellipse.)

Please give me some This Is Us scoop that won’t make me cry. After that Kevin/Cassidy hook-up, I need good news. #teamkophie —Christie
If you’re anxious to catch another glimpse of Toby and Kate’s adult son Jack via flash-forward, this should turn your frown around: Series creator Dan Fogelman tells TVLine exclusively that Blake Stadnik — the actor playing the Lucy-loving warbler — is on the show’s set this week shooting another episode (which should put him back on-air soon after the show returns from its holiday break). 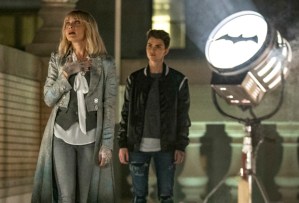 Any scoop on Batwoman? –N.Cullen
When I asked Rachel Skarsten if Alice and Batwoman might ever have cause to ally against a common threat, her short answer was yes. “I think we’ve seen it already a bit with Hush,” she noted, “but there will be a moment in time in which another threat that comes in that Alice, in her own sort of insane way, protects Kate from.”

Any idea when we will see Anna again on NCIS: Los Angeles?-Maria
Though there is no word yet on when Anna might return in the flesh, the episode airing Dec. 8 finds Callen and Sam discussing that relationship — including what it meant in the past, and what it could mean for G’s future.

Is there a chance that we’ll get to see flashbacks of All Rise‘s Lola before she became a judge? –Malasha
As a matter of fact, in an episode airing later this month, through flashbacks we see Mark and Lola’s friendship (and get a glimpse of Lola’s mad prosecutorial skillz), after one of her former murder cases is overturned in the present and Mark helms the retrial. As Wilson Bethel told our Vlada Gelman, “One of the primary components of being able to use the flashback is seeing what Mark and Lola’s relationship looked like even just a few years ago, which I think is a really cool component, because when we picked up with the pilot, that was a major shift in their dynamic.” 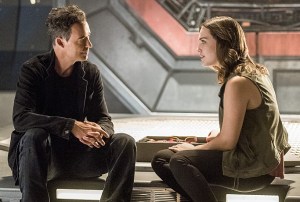 Any scoop on The Flash? –Joao
While on the horn with Carlos Valdes, I of course had to ask when the characters on The Flash will learn that Earth-Two has been erased from existence (at the close of Arrow‘s weeks-ago season premiere). His answer? “The fate of that Earth, all of those questions are answered when the crossover starts [on Sunday, Dec. 8]. That really is when the s–t stars to hit the fan, so to speak. Everything up until then is more just a Crisis ramp-up.”

Your fall preview for The Flash mentioned that Iris would “get pulled into a very deep mystery.” Any further information on what this mystery is, and when we will see it be discovered? –Mariam
I present you with the complete and unexpurgated soundbite from showrunner Eric Wallace, during his discussion of Iris’ need to shore up the Citizen staff: “As a result of the events of the first few episodes of this season, she gets involved in a very deep mystery that plays quite large into what’s happening this season, and our Big Bads and what not.” 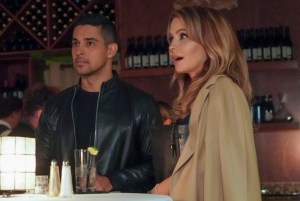 Do you have any details on what General Hospital’s Lisa LoCicero is doing on NCIS? —Shelly
My CWPF guest-stars in the Nov. 12 episode as Elena Devol — whom Special Agent Nick Torres, that very lucky duck, apparently has been dating! “I’m excited to watch that one,” Diona Reasonover shared with me. “There should be some really fun ‘Borres’/’Ellick’ moments, because Ellie didn’t necessarily know Nick was dating anybody. So…. Wink-wink, nudge-nudge!”

Got any scoop on Supernatural? –R.R.
Things may look dire following Dean and Castiel’s big fight at the end of the last episode, but “whether it’s Dean/Cas, Dean/Sam, Sam/Cas, our guys have fought a lot and always kind of found a way back together,” co-showrunner Andrew Dabb notes. “They’re a family at the end of the day, and I think the same thing will happen here. But with that being said, it may be a rocky road.” Bonus Spoiler: Remember those weird visions Sam was experiencing in the season opener? “Once Sam realizes what’s going on here, there are a couple people he will try to reach out to, some you may be expecting, some you may be not,” Dabb teases. 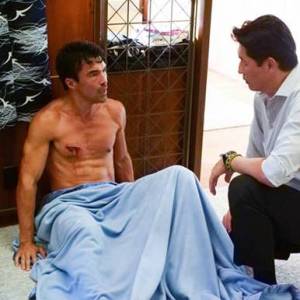 Any information on Hawaii Five-0’s Adam? –Belle
Adam will have to rely on resources from his checkered past when Tamiko is kidnapped in the Dec. 6 episode — and as a result, we will see a side of Adam we have not seen before.

Is Sami Gayle off Blue Bloods for the foreseeable future, with Nicky going to California to pursue a job? Or will we see her later in the season? –Jennifer
You will definitely see her again this season.

Since Katrina Law is now on Hawaii Five-0, does that mean she is leaving The Oath? Or has The Oath been cancelled? –James
Do you know anything about Season 4 of StartUp? I assume it’s canceled, but haven’t heard a single thing since it aired its third season last year. –Damien
Two birds, meet singular stone: Sources tell me that Crackle — of which Sony sold a majority stake to Chicken Soup for the Soul Entertainment — currently has no plans for additional seasons of either of the above series.

Real questions from real people get real answers! If you want the Inside Line on a favorite show, email InsideLine@tvline.com! Remember, questions left in Comments will not be read and may count against your final score.