This Tuesday on The Flash (The CW, 8/7c), Cisco gets a most unexpected visit from Earth-19’s Breacher, who comes bearing some very ominous news. With Barry and Iris enjoying a much-needed island getaway, it falls on Team Flash’s future leader to dive into the mystery that follows.

TVLine spoke with series vet Carlos Valdes about the emotional roller coaster ahead for Mr. Ramon, the “emotional messiness” he and girlfriend Kamilla must deal with, what Barry’s “Crisis” vision means for Vibe, and, of course, the “stupid”-big crossover ahead.

TVLINE | They worked you heavy in this week’s episode, man.
That’s all right! [Laughs] The work load is the same as any other episode, in my opinion. 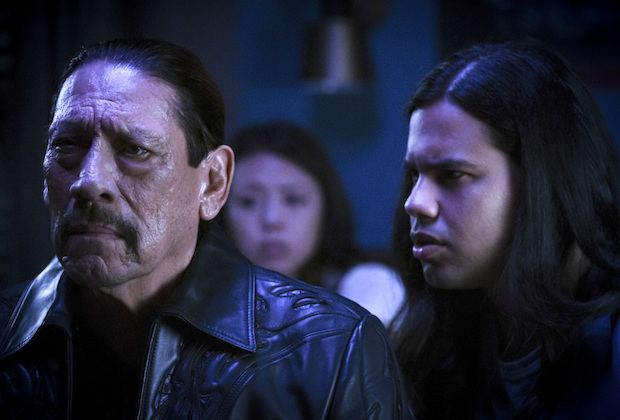 TVLINE | What all are you revealing about the circumstances of Breacher’s visit?
Someone very close to Cisco has been murdered, and there are a lot of really tough emotions to contend with in this episode. Cisco’s in charge of figuring out what happened, and that mystery will lead him on an emotional roller coaster. Oh, yeah.

TVLINE | It’s a bit of a whodunnit, which is interesting and different for the show.
Exactly. We’re used to seeing Cisco’s “sunny countenance,” so to see him sort of battle different kinds of foes and get pulled in different directions is interesting.

TVLINE | How does this storyline dovetail with the larger theme of “Preparing for Life Without Barry”?
In the last episode, Barry revealed to Cisco that he wants Cisco to take the mantle and lead this team through the fallout of what’s to come, and part of that involves making tough choices. So in this episode, the challenge is very apropos and well-timed for Cisco, because he has to muster all the strength that he can in order to see this very macabre circumstance through. It’s almost like he’s being tested before the actual test.

TVLINE | With the looming Crisis, this season has been quite emotional thus far. Moving forward, is the team going to be all “intestinal fortitude,” or will there be additional instances of unchecked grief?
There is a moment, actually, as we get closer to the Crisis, that I thought was very, very beautiful and kind of light-hearted, where Team Flash sort of comes together and reflects on how we got here. It’s a nice “good-bye” moment. In addition to all that intestinal fortitude that you mentioned, there’s also a lot of very nostalgic and heartwarming reflection.

TVLINE | Tackling the comic books’ “Crisis on Infinite Earths” storyline is a very big deal, especially for The Flash in particular. Have you on the cast felt the weight of its importance?
One-hundred percent. It’s been very clear that Eric [Wallace] as a showrunner, in particular, is incredibly passionate about the comic book mythos and lore, and that reflects in the kinds of storylines that we have tackled this season, and how we’ve ramped up to the Crisis. I think that Eric’s passion and his determination to do the mythos justice is palpable in the scripts. When we read them, and when we work through them, I feel like there is very much a reverence on the part of the writers this year, in terms of what they’re hoping to accomplish with this arc. And that makes our jobs a lot easier, because all we have to do is just humble ourselves in the presence of that immensity. 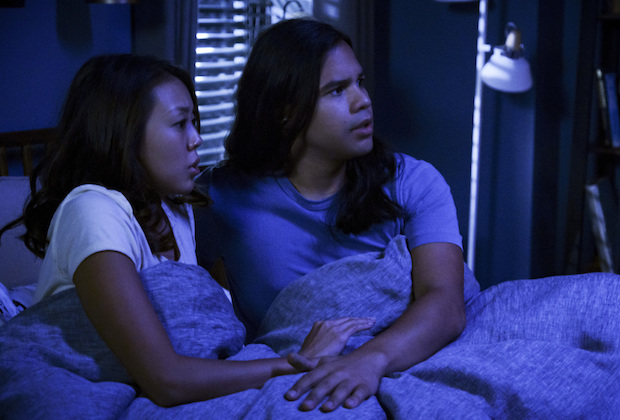 TVLINE | This week’s episode is also a big one for Cisco and Kamilla as a couple. How has it been playing this decidedly romantic, and comparatively normal, relationship?
[Laughs] “Comparatively normal,” I like that. I love working with Victoria [Park], she’s a great spirit to be around. In this episode, I felt like the relationship was really put through the wringer, it was really tested. Like you said, it’s been comparatively normal up until this point, but now Cisco has to grapple with this greater grief while at the same time making sure that Kamilla knows that this doesn’t affect the way he feels about her… It’s a very, emotionally messy circumstance. But I think the value of the relationship is proved by how gracefully Kamilla takes on the challenge, and how much she supports Cisco through his grief.

TVLINE | When Barry went into that gizmo of Jay Garrick’s and saw the Crisis happen, Cisco was dressed as Vibe. Is that a big ol’ Easter egg?
I don’t know. I don’t know the future. I can’t speak on the future, I can’t predict what it’s going to be. All I know is there is a Crisis coming, and we’ve got to be ready for it.

TVLINE | How was the crossover this year? How would you describe it in three words?
My three words are “three isn’t enough.”

TVLINE | It’s that big. That huge.
It’s massive. It’s almost stupid how massive it is. I don’t understand what, like, energy drink these guys are drinking that makes them come up with this stuff, because it really is surprise after surprise after surprise, action sequence upon effects upon storylines….. Just when I thought last year was the limit to the insanity, this year comes along.

TVLINE | I always figured “Crisis on Earth-X” was the high bar, as far as intricacy.
Right, but this year pulls out all the stops, especially in terms of storyline — and especially because we have to contend with Arrow coming to a close.