General reaction No. 1 to Tuesday’s This Is Us premiere: Woah, that was a flash-forward?!

General reaction No. 2 to Tuesday’s This Is Us premiere: Wait, who is that guy?

The Season 4 opener spent a lot of time with a 20-something, blind musician who met a waitress named Lucy when he went to breakfast at a nearby diner. They hit it off right away, and over the course of the hour, we watched them fall in love, marry and get pregnant. But we didn’t know who he was — not even his name! — until he took the stage at a concert hall and the announcer clued us in: The entire sequence was a flash-forward, and the man was the adult version of Toby and Kate’s son, Jack, played by blind actor Blake Stadnik. (For a full recap, go here.)

Stadnik’s entrance was bold — his first shot prominently featured his bare buns — and his performance caught fans’ attention. Given that series creator Dan Fogelman says we’re going to get glimpses of Rockstar Jack’s life as the series continues, we thought we’d pull together a quick dossier on the man playing the Pearson family’s newest member. 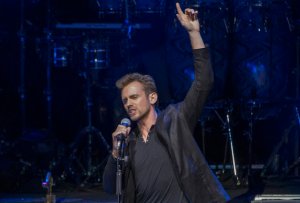 PREVIOUS GIGS | Stadnik is a musical theater actor who’s had roles in productions of 42nd Street, Sweeney Todd: The Demon Barber of Fleet Street and Newsies. He most recently was performing in a Colorado company of Guys and Dolls “we had to try and get him out of in order to shoot the show,” Fogelman told reporters.

HOW HE NABBED THE JOB | Fogelman said that the series wanted a blind actor who could sing, which meant starting the casting process in the off-season. “I was looking for a leading man who was without sight and could be funny and charming but also accessible and sweet,” the showrunner recalled.

HIS BACKSTORY | At age 6, Stadnik was diagnosed with Stargadt Disease, which has caused his eyesight to deteriorate throughout his life. Like his on-screen alter ego, he is able to see some blurry shapes but is legally blind.

TRIAL BY FIRE | This Is Us is Stadnik’s first on-camera experience. In an Instagram post Wednesday, he thanked Auden Thornton, who plays Jack’s wife, Lucy, for being a “giving” scene partner.

One of the most giving scene partners with whom I’ve had the privilege of working. Thank you @audenthorn ; you’re the best! #thisisus #jackdamon

HIS BIG NUMBER | In Tuesday’s premiere, Stadnik performed “Memorized,” a ballad co-written by Dawes frontman Taylor Goldsmith (who happens to be Mandy Moore’s husband) and series composer Siddartha Khosla. It was filmed during intermission at a Chicago concert at The Greek Theatre in Los Angeles.

WHEN WILL JACK BE BACK? | Rockstar Jack’s timeline is “a difficult period to go to all the time, because we’re pretty deep into the future, and it presents production challenges,” Fogelman said. “But we do plan on returning to it.”

A little family photo♥️ Endless thanks to these two wonderful people and everyone at @nbcthisisus who welcomed me to the family! #thisisus #jackdamon