Warning: The following contains spoilers from The Affair series finale.

The theme song for The Affair, performed by Grammy Award winner Fiona Apple, was a melancholy ditty that spoke to the show’s themes of love and death. So it was only fitting that Apple also provide the song that closed out the Showtime drama’s five-season run.

In a surprisingly uplifting series finale, Noah and Helen got back together on the night of Whitney’s wedding. Then, 30 years in the future, an elderly Noah (who now managed the Lobster Roll) reconnected with Joanie and provided the clarity she so desperately needed about Alison. Rather than start anew with E.J. (who was revealed to be Sierra and Vik’s all-grown-up son Eddie James Ullah!), she returned home to her husband Paul and their two daughters. As for Noah, he visited Helen’s grave (R.I.P.!) to read to her from a memoir written by none other than their youngest daughter Stacey.

Then, in the very last scene, Noah trekked to a bluff that overlooked the ocean and started to dance — but it wasn’t just any dance, or any song. It was the dance he choreographed for Whitney’s wedding, and the song was a heartwarming cover of The Waterboys’ “The Whole of the Moon,” as performed by Apple.

Below, series co-creator Sarah Treem divulges on the fates of Noah, Helen and Joanie, reveals why Ben was never brought to justice for Alison’s murder, and explains the significance of the last scene. (For Part 2 of our post mortem about Alison and Cole, click here.)

TVLINE | Before we dive into the finale, I wanted to circle back to penultimate episode, wherein Noah listened to Alison’s Season 1 deposition. You also included flashbacks that were previously part of Alison’s perspective. Can you talk a little bit about the significance of that scene, and how it set up the end of Noah’s arc? 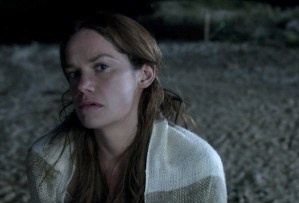 The idea for Noah Solloway, and the show as a whole, is that everybody sees things from their own perspective, and that everybody is trapped in the prism of their own perspective, so we see events radically different from other people based on who we are, where we came from, what our own memories are… All of that influences the way that we see a scene. But in order for a character to quote unquote change, specifically for the Noah Solloway character to change, we thought, “What would it take for him to see something through somebody else’s perspective? What if Noah were to go back and re-remember what happened all of those years ago, but this time see it through Alison’s perspective?” That was the idea behind it. And when he [hears] it again through her perspective, instead of seeing this wild child, or this fantasy that he had of [Alison] as this free, expressive kind of lover that he had, suddenly he sees a woman in grief. He sees a woman who had just lost her child and was suffering, and who probably didn’t need a lover at that point. What she needed was a friend, or some kind of support. So when he says, “Alison, I’m so sorry,” I think that’s what he’s apologizing for. He finally understands what was happening for her in that moment. He then starts to think about what it must have been like for Helen. In finally going back to Alison’s deposition and hearing it again through her perspective, it leads him to this awareness of how he must have treated Helen, which leads to their reconciliation. 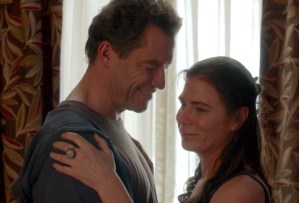 TVLINE | Were Noah and Helen always destined to find their way back to each other, even when you first conceived of the show? Or has the ending evolved a little — or a lot — over time?
It has absolutely evolved a lot. When we initially thought of the show, it was a three-season arc, and the idea was that it was going to be kind of a Take This Waltz scenario. It was only going to be Noah and Alison’s POVs. They were going to start off in this hot and heavy love affair, and in the end, they were going to basically find their way back to the same sort of staid marriage they both felt they had come out of. So that was the original conceit, and as the show evolved, it evolved to include Cole and Helen’s perspectives. When we first came into the show, I thought the concept was, “What happens to two people if they’re both married, but they think they’ve met their soulmates?” So originally it was going to be that Noah and Alison were soulmates, but that’s just not how it evolved organically, which I found really interesting. Then I don’t know if it was the writing, or the acting, or both — probably both — but it just started to feel like the real love affairs were between the original couples, which is great. I think it gave us a much more interesting story to tell.

TVLINE | Why did you have Noah show up in the future timeline?
In a lot of ways, this was always Noah’s series. He was the first character we see, so he was always going to be the last character we see. And he had the most to learn. It seemed like he should be there at the end. 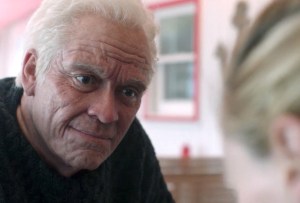 TVLINE | And why was it important to have him reconnect with Joanie?
The idea was that he failed her mother at a certain point in his life; he was young, he was thinking about himself and he was selfish, and he failed to basically send Alison home and back to Cole. Of course, Alison is her own woman, and she made her own choices, but he didn’t [help].

TVLINE | I never doubted that Noah loved Alison, but it was a very different kind of love, which Noah himself suggested to Helen during the previous episode.
Noah took Alison away from a marriage that was very much in trouble, then ultimately didn’t love her as much, or in the way that Cole did. I think he comes to understand that over the course of the series.

TVLINE | And helping Joanie is his way of making up for what he couldn’t provide Alison?
When Joanie [returns to the Lobster Roll], she’s in a similar dilemma to her mother where she says, “I can’t go home. Why can’t I go home?” Now [Noah] understands what he didn’t understand then, and can offer her a piece of wisdom that he couldn’t offer to Alison. The reason she can’t go home is just because it’s hard; there’s nothing wrong… It’s just very difficult to be in a long-term, monogamous relationship — but the thing that he didn’t see when he was a younger man, that he can now see as an older man, is that it’s worth it. So I do think he needed to go through his entire life, and come out where he came out, in order to offer the daughter of his lover what he couldn’t offer her mother… He created a problem years ago when he got together with her mother, and that action not only had consequences on his life and on Alison’s life, but on the next generation. It had enormous consequences that changed the DNA of these families. The crisis that he caused, years later he has an opportunity to put right by giving her daughter different advice… and if there’s anyone who she can listen to at this point, it’s him because of what he knows about Alison. 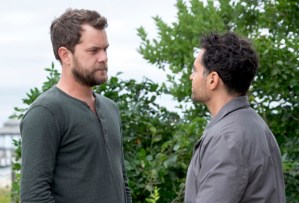 TVLINE | Cole was always convinced that Ben killed Alison. A few short months after he died, Joanie and Noah know it to be true. So why wasn’t Ben brought to justice?
It’s just not our show. It’s not a morality tale about bringing people to justice. Nobody actually pays for their crimes. People pay for crimes that they didn’t commit a lot of times on this show, but no, that’s not the way that this show works. But I think the idea behind Joanie and Ben and their interaction was that, by him not being brought to justice, and by sending her off in this state of disillusionment and panic, that that’s what actually forces her to confront the crisis in her own life. The truth is that the crisis in Joanie’s life is not whether Alison’s killer pays for his crimes. It’s basically the inheritance of this incredibly traumatic childhood that she had and why she can’t get over it enough to, as Luisa says, be happy in her own life. And that, we realized in the writers’ room, was not going to come from sending Ben to prison. That’s just not how this stuff works… So the idea is that what happens to Ben actually sends her in a roundabout way back to Noah, and Noah is the person who helps her understand who her mother really was… She has grown up with this idea that her mother left her, deliberately, in a state of grief, and didn’t love her enough to stay, and it’s just not true. It’s completely false, and she’s built so much of her identity as an adult around that fact, and it causes her this tremendous emptiness and self-loathing. So Ben going to prison wasn’t what she needed. What she needed was to talk to Noah, understand who her mother really was and forgive her mother, and then forgive herself, to make it home. 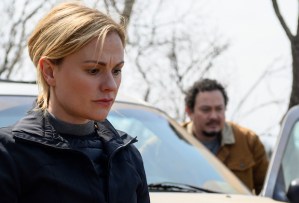 TVLINE | Is Joanie’s decision to leave Eddie and return to her family meant to convey that she has broken free from the generational trauma?
Yes, exactly. The cycle has basically been broken — and they say that’s what happens. It takes a couple generations to break these cycles. In families, the generational trauma usually goes beyond the first generation and exists for two or three generations, and so we wanted to show where that the cycle of trauma that existed within Alison’s family for a couple of generations, even predating Alison, finally gets broken.

TVLINE | When Old Man Noah visits the cemetery, we discover not only that Helen died in 2051, but that Margaret also died in 2051. I thought that was a brilliant little Easter egg for the fans.
I’m super proud of you for catching that, because I didn’t know that anybody was going to catch it. We thought it was hilarious that Margaret just basically lives forever.

TVLINE | And that was one of a handful of moments that made me chuckle. I wasn’t expecting so much humor.
It was… important to bring some moments of levity [to the finale]. I think the truth is — and this is why when you meet Noah later [in life], he’s sort of full of mirth — is that life gets funnier the longer you live. Things just become absurd, and in the absurdity, there is a lot of humor. You have a sense when you’re young that life is moving in some sort of linear progression towards meaning, and then at a certain point you say, “Oh wait, it’s not. It’s just chaos,” and it’s about what we can make of the chaos. 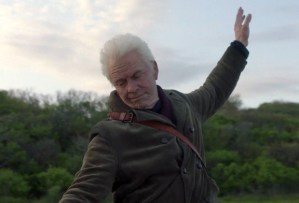 TVLINE | In the end, Old Man Noah recreates the flash mob he choreographed for Whitney’s wedding. Why is that the very last scene? What is it meant to represent?
I showed [that scene] to another writer on the show and he was like, “Yes! Yes! Because life is the dance!” I think it shows that Noah is at peace. He’s gotten through the war, and he’s at the end of his life. He’s alone, but he’s at peace, and that’s what allows him to dance on a bluff like a madman, by himself, to music in his own head.

What did you think of The Affair‘s series finale? Grade it via the following poll, then discuss in the comments.