The penultimate episode of The Affair features Noah and Helen climbing down the side of a cliff to avoid being engulfed in a wildfire. They also encounter a poisonous viper.

And yet, somehow, none of that really matters.

Rather than focus on their highly improbable trek to safety, let us use this space to discuss the extended conversations they have throughout the hour. The first one takes place at Noah’s home, when Helen confronts her ex-husband about the night he wound up in a hot tub with his then-teenage daughter Whitney. Noah refers to it as “the worst night of… my f—king life,” and says that he’s been trying ever since to make it up to her. That’s why he’s determined to give her the perfect wedding. At this point, Helen interrupts and tells Noah that their daughter has disinvited him to the ceremony. 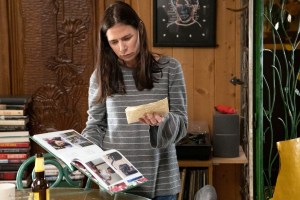 While Noah tears up, Helen retrieves a family photo album. Inside, she finds a beautiful letter that Noah wrote to her the night before their own wedding. After she reads it, she says that Noah used to write her letters like this all the time. She assumed the letters would keep coming, but they eventually stopped. “I never assumed you’d stop loving me,” she says. Before Noah can respond, there’s a frantic knock at the door. It’s a police officer there to inform them that the wildfire is spreading and the city has issued a mandatory evacuation. Noah, however, refuses to leave; Helen has the kids, and all he has is the photo albums and letters to remember them by. When Helen fights him on it, he lashes out at her and says that Whitney is right. “You have some weird codependency with me,” he says. “It’s not appropriate, Helen. I’m not your husband anymore.” Devastated, Helen tells Noah that she hopes he burns, then leaves without him.

After Helen ventures out on her own, Noah turns on the news. A firefighter is interviewed and urges anyone who has not evacuated to get out while they still can. “Movement is life,” he says. Shortly thereafter, Noah retrieves a manila envelope from his attorney that he received shortly after his release from prison. Inside is a USB with recordings of the depositions that Noah and Alison gave Detective Jeffries back in Season 1. As he listens to Alison’s voice, he is filled with sorrow. “I remember promising myself I’d get to 35,” Ruth Wilson’s character says. “And if nothing had changed, then I had tried hard enough.” (Gulp!) Noah stops the recording; it’s too much to bear. “Alison, I’m so sorry,” he whispers to himself. “I wish I could go back.” He then hits play on his own deposition. “When I look back, I can’t tell you what happened,” he says in part. “I enjoyed being married. When other men used to complain about their wives, I’d just think, ‘Poor sucker made a bad choice.'” Noah plays that last part back again, then decides to get a move on before it’s too late. Hearing his own voice, he would soon tell Helen, reminds him of something that he used to know: how to be happy.

When Noah finally catches up to his ex-wife, he convinces her to abandon Sasha’s car and the young, pregnant couple she picked up along the way in order to escape with him by foot. During the day-long journey, Noah assures Helen that Whitney is wrong about her; she is not some “pathetic, desperate enabler” that could never stand on her own two feet. Helen, meanwhile, is unable to say the same when Noah relays Whitney’s opinion that he burns through people; he uses them up and discards them. At this point, Noah and Helen are forced to climb down a rock face to avoid getting engulfed by the fire. They both make it down without a scratch, which seems highly improbable, then the conversation deepens. Helen asks Noah how he can be so compassionate sometimes, and so cruel other times. “We all have our darkness and bad qualities,” Noah responds, but with him, “the dichotomy is extreme.” He tells Helen that he’s been thinking a lot about his childhood. “My mother was always dying and my father was never there, and when he was he was so angry [that] I just wanted to be somewhere else. Someone else. And then I got to college and I met you, and you looked at me with fresh eyes. You told me how much potential that I had and that I was going to be this great artist. I remember thinking to myself — I actually said to myself — ‘Don’t get caught. Don’t let her see the cracks and you’ll be OK.’ And I’m sorry. That’s no way to begin a relationship, but I know that now. You can’t lie your way through a marriage hiding from the one person who knows you better than anyone else, and resenting her when she starts to figure it out, and then hating her for loving you anyway… That’s what I did to you… and I’m really f–king sorry.”

Helen was lying, too, she says. When they first met, “I tried to make you think I was this cool girl, this easy-going person… independent… autonomous. But I really wasn’t even a person then; I was a performance of a person,” she explains. “All I really wanted was someone to save me from Bruce and Margaret. And then what I did to you was so unfair because I brought you into my family with the promise of all of this opportunity… I knew my dad would be threatened by you, and then I just set you up to be the obstacle… I never stood up for you against them. I said I did, but I didn’t… so I’m sorry, too.”

Afterwards, Helen asks Noah if he thinks they’d still be married if they hadn’t spent that summer in Montauk where he first met Alison. “Would I have ever been enough for you?” she ponders. The truth, Noah says, is that “it was me who wasn’t enough, it wasn’t you… I just felt so bad about myself back then.” He explains to Helen that he “wanted to be noticed by someone, make an impact, be the hero,” and “along came this girl [who] she seemed desperate to be saved.” He loved Alison, but that’s not why he left. “I was afraid I was going to die without ever having done anything in my life. Now I’ve done plenty, turns out I’m going to die anyway.” But not today.

As they get closer to the end of their trek, Noah asks Helen what his affair and their subsequent divorce was really like for her. She tells him that it was “f—king awful”; she says that she couldn’t catch her breath for two years, and she cried just about everywhere. “Later, when I had to see you with [Alison] and compare myself to her — I used to think I looked good, and then suddenly I just couldn’t look myself in the mirror anymore, because all I saw were my wrinkles and my stomach after having had four kids,” she says, “and I would just think, ‘How could you not know how ugly you are? Of course he left you.'” Noah expresses remorse, but she shuts him down immediately. “I got through it,” Helen says. “I made it through and I’m more proud of that than anything I’ve done in my life, so please don’t f—king pity me.” (Let it be noted that Helen has, and always will be, an effing rockstar!) She then explains to Noah what hurt the most: She always imagined that one day they’d dance together at Whitney’s wedding; they’d look back at their lives and realize that they built this amazing family together. 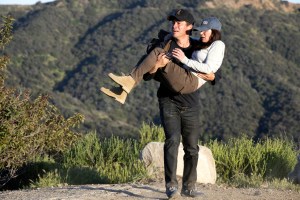 Finally, Noah and Helen make it to the other side of the ravine. They’re just a mile or two out from civilization when Helen sits down for a breather and a rattlesnake bites her leg. Neither Noah nor Helen have a cell service to call for help, so Noah carries her down the road until a vehicle stops and escorts them to the hospital, where Helen undergoes an anti-venom treatment. Noah sits by her bedside and watches the news. We get a glimpse of the very road where Noah caught up to Helen; all of the vehicles have been scorched, and at least 100 people are dead — including, most likely, the pregnant couple that was seated in the back of Sasha’s car. Noah turns off the TV just as Helen wakes up. “Hi, friend,” she says, harkening back to their first exchange in the pilot. “Hi, friend,” he replies. He takes her hand and smiles, then episode cuts to black.

What did you think of The Affair Season 5, Episode 10? Hit the comments with your reactions (as well as your hopes for next week’s series finale).