Call us more eager than Drogon with a freshly barbecued goat, but we’re already considering an extended stay at the House of the Dragon.

The Game of Thrones prequel series was greenlit mere days ago, but Dragon likely will not premiere until 2021. However, it’s never too early to revel in a return to George R.R. Martin’s universe, which Thrones taught us is full of swooping dragons, epic battles and legendary love stories.

So we’re gonna get started now.

Read on for five of the reasons we’re pumped that House of the Dragon is happening, then hit the comments with your thoughts/ideas/predictions about the upcoming prequel. 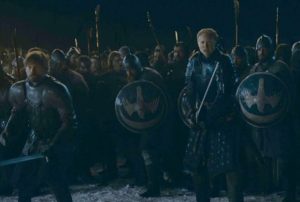 5. THREE SYLLABLES: SAPOCHNIK | Miguel Sapochnik directed some of Thrones‘ most riveting episodes, including Season 5’s “Hardhome” and Season 6’s “Battle of the Bastards.” In the final season, he helmed “The Long Night” (aka the Battle of Winterfell) and “The Bells” (in which Daenerys and her forces destroy King’s Landing). He’ll direct Dragon and serve as its co-showrunner (alongside Colony‘s Ryan J. Condal, who co-created the series with Thrones author George R.R. Martin), which feels like a very strong signal that the prequel will have the look and feel of the original series.

4. HEADS OR TAILS? | The series will take place 300 years before the events of Game of Thrones and, per the official logline, it will chronicle “the beginning of the end for House Targaryen.” And you know what they say about that incestuous family: When they’re born, the gods toss a coin in the air “and the world holds its breath to see how it will land.” Which means plenty of chance for the kind of craziness (cough Viserys cough) that makes for choice drama, no?

3. A FRESH START | Part of the fun of the original series was getting immersed in its world and learning who loved/hated/lusted after/feared/trusted whom. And now we’ll have the chance to do so again — with a new roster of characters, a whole lot of new performances and a heretofore undepicted era (which will pull from Martin’s Fire & Blood companion book).

2. COMFORT ZONE | That said, we’ve really missed Westeros since Game of Thrones went off the air in May. We’re looking forward to being back in the realm — praise the seven — and seeing how it developed into the world we knew.

1. DRAGONS! | You remember how much damage Daenerys’ “children” did once they reached full size, right? Now imagine if the show is set during the Targaryen Civil War, for instance, in which both sides have the scaly beasts at their disposal… Sapochnik’s gonna need a bigger lens.