How did 13-year-old Beth Kane grow up to be off-kilter Alice, leader of Gotham’s Wonderland gang? The CW’s Batwoman will shed some light on that tragic turnabout in this Sunday’s episode, titled, fittingly, “Mine Is a Long and a Sad Tale.”

In the freshman drama’s fifth episode, Alice invites Kate out to a remote diner, to at long last delve into the details of the first days following the car accident that appeared to claim the lives of both Kate’s twin and their mother. But is Kate prepared to hear the harrowing tale? And will the duo’s dad close in on them before it can all be told?

TVLine invited Rachel Skarsten to weigh in on Alice’s Joker-like antics and her game-changing origin story, plus what it was like to see Birds of Prey‘s Huntress return for the next Arrowverse crossover (premiering Dec. 8).

TVLINE | When I saw you at Upfronts, we couldn’t talk about this openly. So tell me now about the decision to reveal who “Alice” really is from go, in the very first episode. Some people were surprised they didn’t play that card close to the vest a bit longer.
Caroline [Dries], our showrunner, and the writers are continuously making these bold choices to do these big reveals and up the stakes of the show, and I really like that. It’s a type television that I gravitate towards — like a Game of Thrones that kills off their lead character in the first season, or Walking Dead, where your favorite character could die because they so mercilessly kill people. It makes it more exciting television to watch and it’s typically something that I feel like networks don’t do. They try to stay a bit safer and prolong things, but I think that underestimates an audience because then you’re assuming that they won’t figure out something for 14 episodes. But they do. You also have to remember that a majority of people who are watching were fans of the comic book and already knew.

TVLINE | Plus, it gives you and Ruby [Rose], and even Dougray [Scott], these additional, great layers to play, instead of being dodgy about it all.
Absolutely, and I really like that it doesn’t take away the animosity between Batwoman and Alice, or Kate and Beth. It doesn’t take away any of the stakes about them fighting good and evil against one another. It just adds the wrinkle of them also being family. 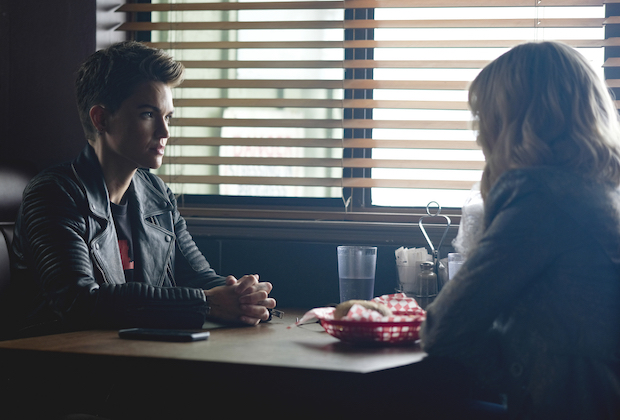 TVLINE | What will we learn about Alice’s origin story this week?
Until recently, when we got another episode that I’m quite a huge fan of, this episode was definitely, for both Ruby and I, one of our favorites to shoot because we got to delve into Alice’s past and really understand why she is the way that she is. And for me, that’s my favorite part about Alice. I love playing a bad guy, but to play one who is redeemable or at least has the possibility of redemption is enjoyable on an entirely different level.

I reference this a lot, but like Walter White in Breaking Bad, you find yourself rooting for him even though he’s doing the most horrific things, and that’s really fascinating to me. I think Alice, hopefully, has that quality, where she’s murdering people and yet you’re like, “Maybe she can be redeemed?”

TVLINE | After this episode airs, do you think people are going to be more rooting for redemption, or rooting against you but with reservations?
I actually wasn’t sure what the reception to Alice would be, so it sort of surprises me that people are already rooting for her before I even got a chance to show the more wounded side of her. So, I think that they will totally continue to root for her, but not just because of that. Ever since Ruby and I did our initial test, we have a nice, natural chemistry with one another and get on quite well, so I feel like because of how we play those sister scenes, people want Alice’s redemption also for Kate, because Kate has skin in the game, too.

TVLINE | I hope you two make peace in time for a nice Passover Seder for the whole family.
[Laughs] I wouldn’t count on Alice being redeemed any time soon. I think the writers are having far too much fun with her being bad. But it could be in the cards at some point. In the comics, actually, Alice does become Red Alice — a bit of a crime fighter/partner for Batwoman — but that’s later. And also, obviously, there are many different delineations of the comics. 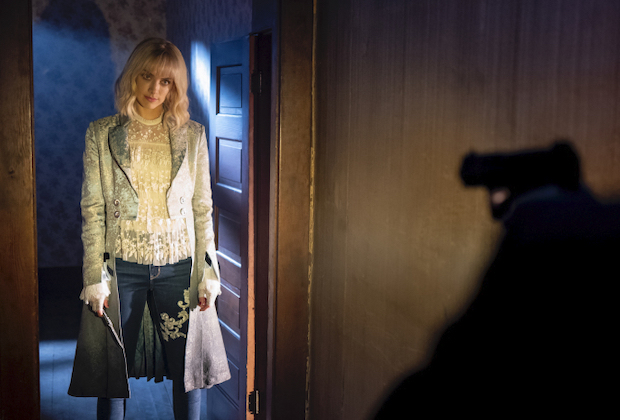 TVLINE | Are we going to learn anything this Sunday about who or what “Mouse” is?
So, Sam Littlefield (The Messengers) plays Mouse and I have loved working with him because I had this joke that everyone else was working with other people! I would, like, occasionally see Ruby, and then sort of spend the rest of the episode pontificating to myself, so I was just very happy to have a scene partner. He’s also so talented at being creepy, and that’s also been really fun because up until now, it’s just been my job to sort of creep everyone out. But now in a scene we see who can up the ante on the other! It will all be revealed in the next episode, how Mouse shows this very different side of Alice.

TVLINE | How do you calibrate the theatricality of your performance? Like, what’s enough versus what’s possibly too much?
The ever fine line that I skate. [Laughs] It’s is my worst nightmare to go too crazy, because it is actually very possible. The thing with Alice is that she’s very dramatic, and there’s a charm in that with her. But for me, the crux of what makes her crazy is actually her ability to change so quickly on a dime, to and swing back and forth between these sorts of massively opposing emotions.  I’ve tried to play the “crazy” more than the traditional kind of like “looney toon who’s running around speaking nonsense and screaming at everybody.”

TVLINE | In your mind, is she not quite the Joker?
People ask me this a lot, and they made comparisons to Harley Quinn as well. Of course, there are shades of the Joker in her, but the difference for me is that with the Joker — up until, obviously, right now, with the Joker film — we’ve never known really why he is the way that he is. He’s really been evil just for evil’s sake. There’s nothing redeemable about him. There was no reason for him being the way that he was. Whereas Alice, in the comics, we knew her to be Beth up until she was 13, and then you see [her and Kate’s] roads diverge because of this incredibly traumatic thing. And that’s what’s motivating her — her evil is coming from a lot of brokenness. There are shades of the Joker, yes, but that, for me, was the biggest difference.

TVLINE | Will there be any future scenarios where we get to see Alice in “street clothes”? Like maybe a slinky party dress or a sensible Ann Taylor sweater set?
You will see Alice in a party dress quite soon, although “slinky” might not be the word for it. It’s a bit more “showgirl” than anything. [Laughs] I think Alice goes for “ultimate impact” in terms of flair, rather than sexy. And you also might get to see Alice in some street clothes… but that’s all I can say without giving too much away.

TVLINE | Does she have a Grand Plan that we haven’t gotten a whiff of yet?
Yes. It’s funny because with this question I can tell you everything I know, because I’m kept in the dark to a great degree, and I actually don’t know what Alice’s grand plan is. When we were in Chicago, I said to Caroline, “You know, I keep making reference to this plan of mine, and maybe I could, like, know what it actually is? Like, could you tell me?” She gave me a bit of a giggle and then looks me just straight dead eye in the face and was like, “No.” And I was OK with that. Caroline did assure me that there is a method to her madness and there’s of a very specific aim that she is trying to accomplish. 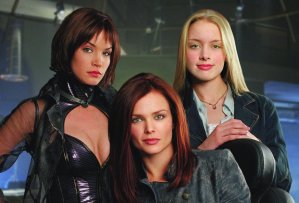 TVLINE | Last question: Did you bump into Birds of Prey castmate Ashley Scott at all when she was in town for the “Crisis” crossover? And were you jealous that she got to dip back into that well?
I did! I did. I was teasing her that I’ve decided I’m now her unofficial publicist because, in New York, I couldn’t stop talking about her coming for the [“Crisis on Infinite Earths”] crossover [as Huntress]. When we did Birds of Prey, I was so young and so out of my element in Los Angeles, and Ashley was so incredibly kind to me and really, really looked after me so much, and so we’ve stayed friends throughout the years. When I found out that she was coming back, she called me and it just worked out really perfectly.

She wasn’t here for very long, but we did get a chance to hang out after she finished filming and it was so crazy to see the photos of her as the Huntress. It felt like some sort of a weird time warp, where you’re sitting on the couch looking at these photos and I was like, “Oh, my goodness. I could be 16 all over again.” It’s like, what is happening? I was so just thrilled that she came back — and I’m hoping that’s not the last that we see of her.