Monday’s episode of The Voice brought to an end Season 17’s Battles (as well as four more acts’ hopes of advancing) and kicked off the much-missed Knockouts with Taylor Swift on board as Team Kelly Clarkson, Blake Shelton, John Legend and Gwen Stefani’s “mega mentor.” Of note — aside from my lingering irritation that Blake dumped the awesome Cory Jackson for the eh-some Zach Bridges — is the fact that the coaches have only one steal, as opposed to a steal and a save as in seasons past. Got all that? Then, as Carson Daly would say, the recap starts now.

The Last of the Battles

Team Gwen: Jake Haldenvang (Grade: C+) defeated Caroline Reilly (Grade: C-) on “Just Like a Pill” | Before Jake and Caroline began rehearsing, I assumed that the former had so much of an edge in their Battle that he could’ve been sponsored by Gillette. But 16-year-old Caroline seemed more comfortable with their Pink cover and impressed her coach with her emotional openness. It also didn’t sound promising for Jake that Gwen complimented him by saying that his high notes, er, “weren’t pitchy, really.” In the moment of truth, Caroline sounded a little flat — or maybe that was just what her performance left me: flat. Jake stood out more, thanks to his rasp and kinda a Steven Tyler Lite quality to his vocal. But overall, this was uninspired and uninspiring. I wouldn’t have cared if they both went home. 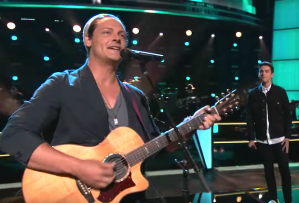 Team Legend: Preston C. Howell (Grade: B+) defeated Mendeleyev (Grade: B-) on “Fire and Rain” | Yikes. This promised to be a rough Battle since I was as interested in seeing both of these guys stay as I was disinterested in seeing Jake or Caroline stick around (and only Blake still had a Steal). Props to John, though — his choice of this James Taylor classic seemed like a great compromise that would allow his team members’ styles to meet in the middle. In rehearsal, Preston sounded downright dreamy; Mendeleyev, a little too much like he was attacking a song that wanted to be caressed. On stage, Mendeleyev sang with great clarity and a hint of vulnerability. But this Battle just belonged to Preston. There was a sweetness to his vocal that was as irresistible as that piece of Halloween candy that you know is gonna push you over the brink into nausea, but you eat it, anyway. Mendeleyev shone again on his bigger, rockier notes, but still… this was Preston’s all the way. Bummer that they can’t sing together all the time — their harmonies were gorgeous.

Team Kelly: Hello Sunday (Grade: B-) defeated Lauren Hall (Grade: A-) on “Wrecking Ball” — Lauren stolen by Blake | Before her team members arrived for rehearsal, Kelly told advisor Normani that this was her “odd pairing.” But they sounded oddly good together. Hello Sunday had to work to get big and belty, but they were getting there during practice. Lauren needed no such coaching on bigness or belty-ness; it came as naturally to her as breathing, which made me think she was gonna take a, er, wrecking ball to the youngsters’ dreams of advancing. On stage, Hello Sunday started off sounding soft and pretty, which made their vocal pale in comparison to Lauren’s when she opened her mouth — her vocal was just. So. Commanding. The kids got good and bombastic on the chorus — and that howl they threw in there was wicked! — but it (wrongly!) seemed to me that there was just no beating Lauren. Her voice is massive, and she beyond-ably demonstrated that she knows how to wield it. The whippersnappers, on the other hand, wound up sounding a little desperate and off toward the end. They have great promise, it just isn’t a promise that’s 100-percent ready to be fulfilled.

The First of the Knockouts 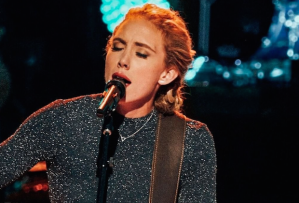 Team Blake: Cali Wilson singing “Wicked Game” (Grade: C) defeated Marina Chello singing “I (Who Have Nothing)” (Grade: A) | In rehearsal, Cali seemed to have chosen the freakin’ perfect song — she sounded like a million bucks on her Chris Isaak cover. Taylor only had one note for her: play more than one emotion over the course of the performance. Marina explained that she chose her Tom Jones cover because it was one of her singer father’s favorites. Cali had to been at least a little shook when Taylor had no vocal notes whatsoever for her opponent. Up first, Marina served total Shirley Bassey realness. Every time I thought her voice couldn’t possibly open up any wider or go any bigger, damn, if she didn’t prove me wrong. She was a force! Taking the mic after that hardest of acts to follow, Cali looked like she was coolly confident, but that cool confidence didn’t extend to her vocal. She sounded great on the choruses; however, throughout the rest of the song, it felt like she wasn’t always sure of what she was going for. (Maybe she’d been confused by the instruction to play more than one emotion?) John loved Cali’s performance regardless — he called it pitch-perfect. Obviously, Blake dug it, too. Couldn’t believe he let go of a belter like Marina. (First Cory Jackson, now this?!? What are you doing, Shelton?)

Team Kelly: Jake Hoot singing “Cover Me Up” (Grade: A-) defeated Melinda Rodriguez singing “Always Be My Baby” (Grade: C-) | After Jake tried out his number for Kelly and Taylor, La Swift suggested that he work at not swaying so much, lest that become the audience’s focus. Rehearsing second, Melinda tearfully revealed that her brother, whose body is covered with tattoos of Taylor’s album titles, was having the heart transplant he’d been waiting for. He just had to wake up after surgery, Melinda said, so that she could tell him about her day with Taylor. Once everyone recovered from Melinda’s emotional story, Taylor redirected the way that she was approaching the melody. Up first, Jake called to mind Red Marlow. The way he sang his story made you wanna lean in and listen closer. He also showed off pretty impressive range and, briefly, a rasp that could sand the paint off a wall. In short, he killed it. When Melinda took her turn in the spotlight, she ran afoul of enough pitch issues to get her benched in a baseball game. Overall, she has a sunny, pleasant voice, but this wasn’t a great showcase of it. John somehow thought that this so-so performance had been Mariah-caliber. (Somewhere, Mariah had to have been like, “Seriously?”) Anyway, if you were wondering, Melinda’s brother, we were informed in a cutaway, was recovering nicely. And no doubt enjoying some Taylor swag. 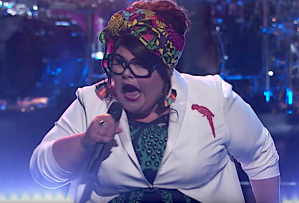 Team Legend: Katie Kadan singing “Piece of My Heart” (Grade: A) defeated Max Boyle singing “When the Party’s Over” (Grade: A) — Max stolen by Kelly | Oy! I was sure that this Knockout was going to devastate me, because I did not want to lose either Katie or Max. They’d been among my favorites since the Blinds. Pain. Ful. I hoped the coaches had those Steals ready, or I was likely to break my TV reaching through it to press their buttons for ’em! In rehearsal, Katie, as she will do, blew away Taylor with her “ballsy” performance. “You morph into a superhero on stage,” Taylor marveled. And, amazing as Katie was, she didn’t need any guidance, it seemed. Up next, Max was determined to meet the challenge head-on. He did so by pouring his broken heart into a rendition of Billie Eilish that was as raw as an open wound. When he was done, Taylor didn’t have as much advice for him as she did praise. On stage… well, crap. If there is a way that I could love Katie more, I dunno what it is. Her costume-y style is so outré, it borders on cartoonish; she almost challenges you to write her off as a caricature just so she can smack you the hell back in line with a voice that’s so monumental in its force and expressiveness, it could start landslides two states over. As Blake put it after she absolutely demolished her Janis Joplin cover, “Every time she comes out here, they have to repair the roof.” She is a star to the nth, maybe even to whatever comes after the nth. When Max took his turn behind the mic, Kelly described it thusly: She’d expected Katie to be Wonder Woman but hadn’t anticipated him being Superman, and he was. His emotional performance was less bombastic than Katie’s number but, honestly, no less impactful. His tone was gorgeous, his control on those high notes, stunning, and he sounded, arguably more than Katie, like an act you’d hear on the radio today. (I only wish we heard more Katies on the radio!)

So, who slayed their Battle in your opinion? And were any of the Knockouts actual… knockouts? Vote in the polls below, then hit the comments.