Tuesday’s episode of The Voice picked up right where Monday’s left off — with Team Gwen Stefani’s James Violet trying to choose whether to stick with the coach who’d just declared him the loser of his Battle with Kyndal Inskeep or jump ship to join Team John Legend. 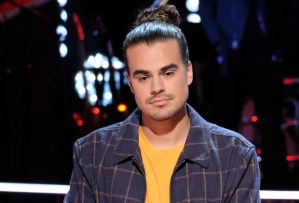 To me, it seemed like a no-brainer: If you have a chance to work with the EGOT winner who coached Maelyn Jarmon to victory in Season 16, you take it. But James appeared to be wracking his man-bun to make the right decision. In the end, he chose John. After that, it was on to Night 4’s Battles, which went down as follows:

Team Blake: Zach Bridges (Grade: B) defeated Cory Jackson (Grade: A) on “Should’ve Been a Cowboy” | It didn’t seem like a good omen for Zach that I couldn’t remember him from the Blinds, whereas Cory had made such an impression that he was on my list of the 10 auditioners with the most potential. But Zach, I was reminded, was more straightforward country; Cory leaned toward theatrical country, which I suspected might hurt him. Blake told us that he wanted to see which of them could make him believe that they really did wish they could’ve been a cowboy — not a cowboy on the Broadway stage. When they stepped behind their mics, Zach did indeed come off authentically country — his performance sounded like a really good one that a fella would give while behind the wheel, singing with the radio tooling around farm country in his pickup. But da-amn, Cory’s voice is so much richer and as intoxicating as moonshine. On top of that, he had personality plus. I couldn’t take my eyes off him any more than I could my ears — to the point that sometimes Zach seemed like his backing vocalist, not a co-headliner. Needless to say, I was gutted that Blake went with the duller contestant. Zach’s not bad, but Blake could’ve had great instead of just good. I haven’t been this irked at The Voice since Kennedy Holmes didn’t win Season 15. 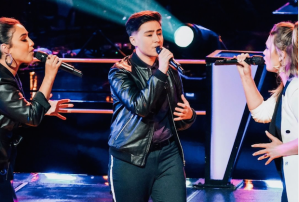 Team Legend: Marybeth Byrd (Grade: A-) defeated Dane & Stephanie (Grade: B+) on “Burning House” | I really dug the twins’ harmonizing in their Blind, but I suspected that Marybeth’s voice was massive enough to blow them both off the stage. In rehearsal, the three of them sounded freaking spectacular together — harmonies as soft as a pillow. But Dane struggled a bit, as he was still adjusting to his changing voice. Confidence was also an issue for him. Marybeth, on the other hand, brought so much emotion to her vocal that it almost didn’t seem worth it to fight the Battle — she’s! So! Good! On stage, she appeared to be feeling the song so deeply that she all but reduced me to rubble from the first line. Dane & Stephanie sounded beautiful, too, but their combined voices generally acted more like a cushion elevating Marybeth’s. It was a pretty spectacular Battle, and one that made me wish the performances were available on iTunes.

Team Gwen: Rose Short (Grade: A) defeated Jessie Lawrence (Grade: B) on “Can’t Feel My Face” — Jessie saved by Gwen | When Rose and Jessie walked into rehearsal, she broke down in tears at the sight of advisor will.i.am (and the experience only got more emotional for her from there). As the contestants began getting used to their number, poor Jessie sweated bullets — how hot was it in there? Maybe he anticipated will.i.am’s critique that he had to try to be as naturally charismatic as Rose. Bless her heart, she told us in a cutaway that being there, having overcome her own self-doubt to put herself out there, she felt like she could breathe for the first time. I’d have to love ‘er even if she wasn’t a kickass singer (which she is). On stage, Rose and Jessie’s Battle seemed like a fair fight for the most part. He had the better moves and was able to stretch notes as easily as my belly does a T-shirt I should know better than to try to wear (which, to be clear, I mean as a compliment to him). But Rose has the voice of a diva with a capital D — and a capital I, V and A, too. When she went low, it sounded like the tuba section of a marching band passing by — her vocal had that major a rumble to it. And when she went big, she did it so casually that I wondered just how big her voice could actually get if she really let loose. I’ve been a Rose fan since the Blinds, and this performance only reinforced my belief that she has even more blossoming to do. She strikes me as, like, a Chaka Khan in the making. She has that kind of presence and power.

So, do you think James made the right (i.e. only sensible) decision? Were you as ticked as me that Cory was cut? And who did you think stood out in Tuesday’s Battles? Vote in the poll below, then hit the comments.