We’re only on Night 3 of The Voice’s Season 17 Battles, and already, I’m running out of gasp. Sometimes the shocks that the show has delivered have been good; for instance, Team John Legend’s Zoe Upkins turned out to be more of a bottle rocket than a mere sparkler, and coach Blake Shelton opted to keep Kat Hammock, a potential Addison Agen 2.0, over the far countrier Josie Jones. Other times, the shocks have been… er, not so good; lookin’ at you, Kelly Clarkson, for rewarding Injoy Fountain for kicking Alex Guthrie’s ass… by dumping her. What surprises did Monday’s episode hold in store? Read on and find out. 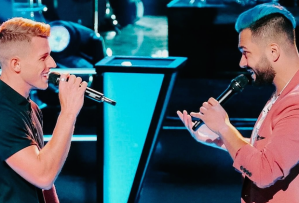 Team Legend: Will Breman (Grade: C+) defeated Jared Herzog (Grade: B) on “Treat You Better” | Ahead of their Shawn Mendes cover, I assumed that this Battle was Will’s to lose. He was, from what I recalled of the Blinds, more likable and inventive than his opponent; Jared hadn’t impressed me nearly as much as he had his coach. In rehearsal, Jared’s nerves were so bad that advisor Usher suggested he start his performance with his eyes closed so that he could get centered. As for Will, he was told to just relax already — easier said than done, of course. All that said, they meshed pretty well. When they finally stepped into the spotlight, Jared started off sounding like he had indeed found his center; he even pulled out a raspy quality that I didn’t remember from the Blinds (but totally dug). Will was still more interesting to watch, though, and his voice was probably the richer of the two. Still, I had to give this victory to Jared — he kinda slayed it, demonstrating a vocal strength and stamina at which his wispy Blind hadn’t even hinted.

Team Blake: Ricky Duran (Grade: B+) defeated Marina Chello (Grade: B-) on “Valerie” — Marina saved by Blake | In rehearsal, Ricky knocked out advisor Darius Rucker; Marina… mm, she more smacked him than completely knocked him out. On stage, although the number felt as sluggish as a 45 played at 33 rpm — The Zutons’ version of the song is a lot less peppy than Amy Winehouse’s, apparently — Ricky and Marina both sounded good. However, only one of them “did well,” so to speak. Marina has a voice that’s as solid as a brick wall; trouble is, she just isn’t that interesting, either to watch or listen to. She’s like the most kickass backing vocalist ever, just waiting to happen. Ricky, on the other hand, draws your attention the same way a laser pointer does a cat’s — you can’t look away from him. What’s more, his voice has a unique, mutable quality — it’s like a sip of wine that reveals different flavors the longer you taste it. (Did I just call his voice oaky and pleasantly astringent?) As John put it, “You sound like a star.” Marina’s a fine singer; Ricky, a potential Voice winner. 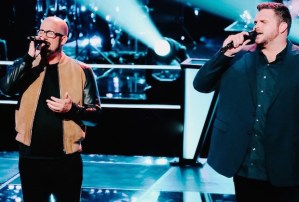 Team Kelly: Jake Hoot (Grade: B) defeated Steve Knill (Grade: C) on “Always On My Mind” | Before the contestants arrived to practice, Kelly explained to advisor Normani that Jake was country extra, and Steve could sing anything. While she did so, I tried hard to remember from the Blinds who Jake was. Once I did, I suspected that he would win. He hadn’t wowed me like Steve had — his voice was the equivalent of a Swiss army knife; it could do anything, it seemed — but I had a hunch Jake’s country leanings would make him more appealing to Kelly (who, to her credit, encouraged Steve to sing “boy” in the song versus “girl” to be truer to himself). When the Battle of the one-chair turns began, Steve started strong but unremarkable; Jake, on the other hand, seemed to have a voice that could cut through a wall of static — he stood out in the best of all possible ways. Not only was he as country as a hayride, he showcased a richness to his voice that I thought probably should’ve counted as my dessert. Steve acquitted himself nicely, but Jake’s voice was so big, so booming, so lush, his opponent often felt like a supporting player in his own showcase.

Team Gwen: Royce Lovett (Grade: B) defeated Kiara Brown (Grade: B-) on “Turn Your Lights Down Low” — Kiara stolen by Kelly | As Kiara and Royce headed into rehearsal, I predicted that this wasn’t going to be much of a Battle — the Blinds had suggested that she had it going on, whereas he was mainly interesting because he’d performed a genre that’s atypical for the show (reggae). As the duo practiced, Gwen suggested that Kiara came off nice and polite; Royce, down and dirty — which was handing him the victory. “Make this [song] your home,” advisor will.i.am instructed Kiara. When the twosome rehearsed on stage, Gwen felt like they’d traded places; Kiara had said “No more Ms. Nice Guy,” while Royce was holding back. In the moment of truth, Royce sounded so at home on the Bob Marley/Lauryn Hill cover that he could’ve used it as his return address. And he demonstrated a stronger vocal than he had during the Blinds — it was like his larynx had been doing curls ever since. Kiara had the prettier voice, and she was looser than she had been. But I still would’ve given this win to Royce.

Team Blake: Joana Martinez (Grade: B-) defeated Matthew McQueen (Grade: B) on “High Hopes” | Fun (?) fact: I rarely talk when I’m recapping The Voice, no matter how many people are in the room with; I’m always listening and paying attention. (OK, and hushing them.) But when I saw that Joana was up next, I did accidentally blurt out, “Oo, Joana!” I was that stoked to hear her again after her wowza of a Blind. I was less keen on Matthew. He’d struck me as a good singer but also like he’d sell me a lemon of a used car. (John had nailed it when he’d said Matthew looks like a handsome movie villain.) In rehearsal, Joana impressed Darius Rucker as “a 15-year-old 40-year-old.” Matthew… he wasn’t gonna go down without a fight. He sounded like he could actually knock out one of my faves. Plus, he had better diction and 75 percent of his body weight was cheekbones. So I was all, “Panic at the Disco? Uh, Panic on the Voice Stage!” When the spotlight fell on them, eesh. Their first stab at harmonizing was way off. Overall, Joana sounded as fantastic as I’ve come to expect, but she ran into a pitch issue midway through. And the gravel in Matthew’s voice really made his vocal stand out. This wasn’t a great Battle in that they didn’t sound all that hot together. But I guess it did the trick, because it made me think that Matthew was the clear winner. John called Joana’s range “super exciting,” and it was. However, against all odds, I thought Matthew was more memorable.

Team Gwen: Kyndal Inskeep (Grade: B) defeated James Violet (Grade: B+) on “I Could Use a Love Song” — James stolen by John or saved by Gwen (cliffhanger!) | I wasn’t sure what to expect of this Battle. I liked both singers’ Blinds — at least when I recalled who they were. (Confession: I initially mistook Kyndal for Marybeth Byrd.) Neither of them had heard this Maren Morris song before their coach assigned it to them. In rehearsal, will.i.am called them on not having it memorized prior to practice — if it was the Grammys, they would’ve studied the lyrics harder, right? Point made. As Kyndal and James got used to the number, I had a feeling this was going to go her way. There was a poignancy to her vocal that made me feel like somewhere in my chest was a heart whose strings she was tugging. (Who knew?) On stage, the lived-in quality of James’ voice served him beautifully (as did his enunciation). And his sensitivity was far from the only trick in his bag of ’em — the dude has range, too. For her part, Kyndal held her own, not only matching James for emotionality but perhaps shining brighter because her vocal had greater crispness and clarity throughout; if his notes floated on the music, hers pierced it. Still, in the end, I’d have given the win to James. He seemed to be feeling it more, and that made me feel it more.

And dispatched in a montage — argh! — Team Kelly’s Gracee Shriver defeated Brennan Lassiter on “Blue Ain’t Your Color,” and Damali defeated Brooke Stephenson on “Set Fire to the Rain.”

So, did any of the coaches’ moves Monday leave you scratching your head? And which singer stood out to you? Vote in the poll below, then hit the comments.