Who would’ve guessed that Tom Mison would play Watchmen‘s Doctor Manhattan? (Kind of.)

Sunday’s episode of HBO’s superhero epic found Jeremy Irons’ character staging The Watchmaker’s Son, the “tragedy in five acts” he mentioned in the series’ premiere. Fans of the comic books on which the show is based likely recognized the play as the origin story of Doctor Manhattan, aka Jonathan Osterman, a nuclear physicist who was turned into a gigantic, blue superhuman after an accident in his lab.

Because he is essentially alone in the manor house, Irons’ character cast his servants Mr. Phillips (Sleepy Hollow alum Mison) and Miss Crookshanks (Sara Vickers, ITV’s Endevour) to play all of the parts in his theatrical flight of fancy. In the play, when Phillips’ Osterman apparently dies in the lab’s test chamber, he reappears moments later as the very blue, very naked Doctor Manhattan. What at first seems like a bit of cunning stagecraft, though, soon is revealed as something far weirder: Irons’ character has surrounded himself with several clones of both Phillips and Crookshanks, and he doesn’t seem bothered by killing them when the mood strikes. (Go here for a full recap of the episode.)

TVLine got Mison, most recently seen as Four Weddings and a Funeral‘s dearly departed Quentin, on the phone to chat about Watchmen‘s bizarre night at the theater. The conversation devolved quickly. 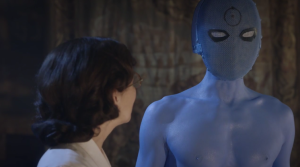 TVLINE | I wanted to talk to you about Episode 2 and the play.
Oh yes! I’ll start by saying: That is not my penis.

TVLINE | Because I am an intrepid journalist, I already knew that was not your penis.
Oh really? Well, I might need to rejoin Twitter and have #NotMyPenis up there.

TVLINE | I spoke with [director] Nicole Kassel about the episode, and she hinted that the blue Phillips might be a body double. Still, I feel like I know you just well enough that I had to avert my eyes.
[Laughs] Yes. I had to tell all of my neighbors. I live near old people, and just in case they happen to watch, I just had to let everyone know that they can look me in the eye.

TVLINE | How did you alert your neighbors? Fliers under the door? Email to the building?
[Laughs] A t-shirt. I walked around in a t-shirt with a picture of my [Editor’s note: The conversation here is garbled, mainly because I start yelling, “No! This is a family publication!” as Mison laughs.] But actually, the process of choosing a double was — I mean, Watchmen, as you’ve seen, is a pretty weird show in parts. But the process of choosing a willy double was by far the weirdest. I’ve never had so many, well, any pictures sent to me. I wasn’t in a room with a line-up. [Laughs] Like the usual suspects? No.

TVLINE | So walk me through this process. They give you a bunch of photos and ask you to pick which is the closest to you?
They kept emailing me more and more, pictures of these poor boys who just have to take pictures of themselves in their bedrooms. And I had to sift through. “No, no, no.” I ended up with a boy called Fergal. Lovely chap. 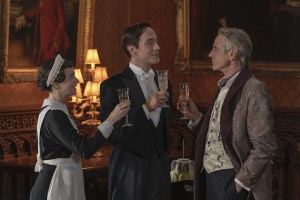 TVLINE | OK, back it up. You’re cast in Watchmen: What did you know going in?
Very little. They sent some stuff for me to look at. Jeremy [Iron]’s character was known just as The Blonde Man. I only saw the pilot script, and nothing else. Of course, the pilot, and suddenly it flits away to the manor house, and Jeremy is just called The Blonde Man, and he has two strange servants doing strange things. And that’s it. That’s all I got. I wasn’t allowed to look at the rest of the pilot.

So it’s Damon [Lindelof, showrunner], and it’s HBO, and it’s Watchmen, which is a comic that I’ve loved for a long time. So yeah, sure, why not? Give me a horseshoe, and I’m in. They they said, “Why don’t we get you on the phone with Damon?” I was on holiday in the south of France at the time, and Damon called and we ended up just having a two-hour conversation about comics, about Watchmen, about the series as a whole. He told me a little bit about Mr. Phillips and Miss Crookshanks and The Blonde Man, but really, still kept it very close to his chest. And at the time, actually, this is one of his brilliant red herrings: The play, which in the pilot Jeremy says is The Watchmaker’s Son, on the pages that they sent out, it was called The Black Freighter — which is the comic within the comic from the original. So I’m now thinking, “Oh my God, The Blonde Man has to be Max Shea, who’s the writer who helped Ozymandias create the squid in the book!” I thought, “Wow, this has got to be about him! Jeremy’s playing him!” It completely threw me off, which Damon does quite nicely anyway in the finished product of everything he does. So I really knew nothing and just got it thrown at me as we went along.

There’s a benefit to that, as well. Obviously, people want to keep it secret, because not everyone wants spoilers. But also, the way that Damon writes, it’s such a treat when things are revealed to you that it’s a shame to know more. It’s a shame to go in knowing anything, really. Because particularly in this, and particularly in our scenes, every week there’s going to be a nice little surprise. But then of course, with each surprise there’s a question. He does it lovingly to the audience. Some writers, I think, like to keep things hidden because they have control. But Damon loves the audience, so he loves giving little tidbits. And he loves knowing that there’s going to be a thrill when there’s a reveal. I think that’s why he’s got to be one of the best writers on TV at the moment. 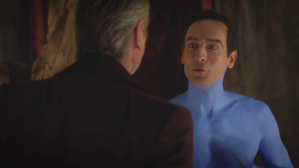 TVLINE | Phillips is someone who cannot act, yet there he is up on stage. How do you play that — in a ridiculous situation — without it crossing over into buffoonery?
This was the subject of such long conversation. We spent so long discussing the nature of bad acting. At the core of most of Phillips and Crookshanks is their innocence, and that need to satisfy their master. We see that he gives them their scripts and he tells them what acting is, and what it should be, and gives them a few notes and then they go for it… and then he murders them. It’s always difficult playing bad acting, quite where to place it. We tried to get as close to real bad acting as we could. We tried various different things. We tried to keep within the period element. What if he were a big fan of John Barrymore or someone like that? Trying to do it like that. Trying to perform like a period actor. But that didn’t really work. So we kept going back to when he gives both of them the script. “It’s about being real. You’ve got to show reality.” But they don’t really have the same grasp of reality, clearly… We didn’t try and do “bad acting.” I never try and do bad acting. It just kind of catches up with me. [Laughs]

TVLINE | We see Phillips and Crookshanks celebrating an anniversary with their master. Will we eventually, in the first season, find out what that anniversary is all about?
Of course you will. But you’re going to have to wait. It’s really satisfying. Damon is really good at the reveals. As he actually writes in the stage directions of his script, “What just happened? You’re going to have to wait and find out.” It’s a beautiful note. And he delivers. It’s worth it.