Whether you’re a die-hard Watchmen fan or you’ve never even heard of Rorschach & Co., there’s a good chance you weren’t quite sure what was going on in Sunday’s premiere of HBO’s adaptation of the DC Comics tale. And that made for a fun — if head-scratching (yeah, there really was a squid shower) — ride, courtesy of showrunner Damon Lindelof (The Leftovers).

In a moment, we’ll want to hear your thoughts on all things Watchmen. But first, a quick recap of the episode, titled “It’s Summer and We’re Running Out of Ice.”

BLACK WALL STREET | We open on black-and-white silent film footage: It’s a movie about Bass Reeves, the (real-life) first black deputy United States marshal west of the Mississippi. But when the camera pulls back, we see the house is nearly empty. The only people there are the female pianist accompanying the movie and a young boy enjoying the show. Then there’s an explosion outside, and a man with a gun enters and hands the pianist the weapon. “Time to go,” he says.

The setting is Tulsa, Okla., 1921. Outside, the Klu Klux Klan is carrying on a violent raid of the Greenwood section of town, home to many prosperous businesses owned by black residents. (This horrifying event actually happened and has become known as “Black Wall Street.”) So much violence occurs as we watch the man get the boy and woman to another building: people set on fire, shootings, even an air attack via plane. Once inside, the man and woman learn that there’s not enough room for all of them to be smuggled out to safety. So the man writes a note, puts it in the boy’s pocket and sends him away with another couple and their infant daughter. There’s an explosion nearby as they travel, and the kid gets knocked unconscious. He wakes up in a field to find that the couple transporting him is dead but their baby survived. So he picks up the girl and walks away, noticing that Greenwood is in flames in the distance. The note in his pocket, we learn, reads, “Watch over this boy.” 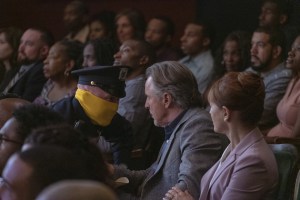 MAN DOWN! | In modern-day Tulsa, a police officer pulls over a motorist who claims to be doing nothing more than hauling lettuce. The cop is wearing a yellow mask over the bottom two-thirds of his face, and he notices that the driver has his own mask/ski cap in the glovebox. The officer retreats to his car and calls in his notice of “Kavalry contraband,” then requests that the central office unlock his weapon so he can use it. It takes a while to happen, but eventually his request is granted — just before the now-masked driver guns him down.

Police Chief Judd Crawford (hi, Miami Vice‘s Don Johnson!) is at a performance of Oklahoma! with an all-black cast when he gets the call about his downed officer, who is alive but in bad shape at the hospital. We eventually learn that all police officers keep their jobs a secret from the general public, in an effort to thwart a racist terrorist organization called The Seventh Kavalry. The Kavalry has been inactive for the past three years, but it appears to be back with gusto: The group sends the police a video in which a room full of Kavalry members, all wearing masks like the one on the gunman we saw earlier, threaten to do terrible things to law enforcement officials. “Tick tock,” the group repeats menacingly before the clip ends. 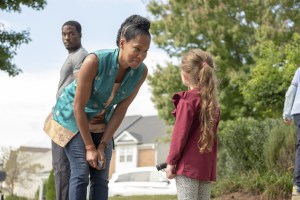 MEET ANGELA ABAR | While all of this is going on, Angela Abar (hi, Southland‘s Regina King!) is giving a baking lesson to a classroom full of school kids. It’s here that we start to get a sense of the differences between this version of the present and our own: For instance, Vietnam is one of the United States of America, and Robert Redford is president. Angela is a baker who used to be a police officer before retiring; she was nearly killed in an incident known as the “White Night,” in which Kavalry members broke into police officers’ homes and attacked them and their families. When a smartass kid asks if she received “Redfordations,” another kid jumps him.

Turns out, the jumper is Angela’s son, Topher. (As for “Redfordations,” we’ll learn more about them in the future.) As the pair drive home, an alarm goes off, which seems to irk Angela more than scare her. She pulls the car to the side of the road just in time for the sky to darken and a multitude of small squid to fall from the sky. When it abates, Angela scrapes the slimy critters off her windshield, then continues on her way. OK then!

At home, we meet Angela’s husband, Cal, and another one of their daughters. But then her pager goes off with the message, “Little Bighorn,” and she takes off. (Interesting note: In Watchmen‘s America of 2019, cell phones are not a thing.)

INTRODUCING SISTER NIGHT | Angela heads Milk & Hanoi, the Vietnamese-style bakery she’s in the process of opening. There’s an old man in a wheelchair out front, but she pays him little mind as she makes her way to a heavily secured room at the back of the business. Inside, she puts on a stylized nun’s outfit and speeds away in a car with darkly tinted windows. She drives to a trailer park, kicks down the door of one abode and punches the guy inside.

As you might’ve guessed, Angela isn’t quite as retired from police work as she let on earlier: She’s a detective who dresses as Sister Night while on duty. “I got a nose for white supremacy,” she explains to Judd when he returns to his office, adding that the guy now being held in her trunk “smells like bleach.” They throw the detainee into “the pod,” a chamber in which visuals both innocuous and incendiary flash while Wade — aka Det. Looking Glass (hi, O Brother, Where Art Thou?‘s Tim Blake Nelson! — asks questions. Wade can tell the guy is lying about not knowing where the shooter went, but the person of interest doesn’t cough up the location until Angela roughs him up. “Cattle ranch,” she reports.

Next thing we know, Angela, Wade and another detective known as Red Scare (hi, The Outpost‘s Andrew Howard!) sneak up to the ranch while Judd and another detective (hi, All Rise‘s Jessica Camacho!) approach via a hovercraft-y type of aircraft. Inside, Kavalry members are stockpiling watch batteries, but they jump into action when an alarm alerts them to the police’s presence. The whole thing turns into all-out battle that ends when Angela kills one Kavalry member and the other — the guy who shot the cop at the top of the episode — commits suicide to evade capture. Outside, Judd and the detective manage to destroy the airplane via which the other Kavalry members were trying to escape… but they crash their craft in the process. (Don’t worry: Everyone’s fine. For now.) 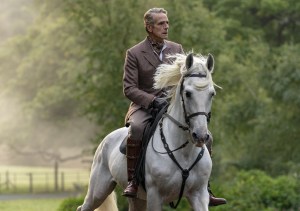 ‘ELLO ‘ELLO ‘ELLO | And now, for something completely different! A man (hi, The Borgias‘ Jeremy Irons!) rides a horse up to what seems like an English manor home. Next we see him writing a script in the nude while a maid massages his thighs. His butler approaches (hi, Sleepy Hollow‘s Tom Mison!) and reminds him it’s his anniversary. Of what, we don’t know. But later, the butler (whose name is Mr. Phillips) and the maid (whose name is Miss Crookshanks) present him with a pocket watch and cake, then offer him a horseshoe with which to cut the dessert. Huh?

The man seems moved by their gestures and tells them he’s started writing “a tragedy in five acts,” and he wants them to play the lead roles when it’s done. The title? The Watchmaker’s Son.

PORE JUD IS DAID | Back in Tulsa, Angela’s family has Judd and his wife Jane (hi, Masters of Sex‘s Frances Fisher!) over for dinner. They all have a convivial time, especially after Judd surreptitiously snorts some cocaine in the kitchen. He sings Oklahoma!’s “People Will Say We’re in Love” and everyone laughs. Outside, he and Angela quietly discuss how the watch batteries the Kavalry were stockpiling were the type you can’t buy anymore, because the synthetic lithium in them was making people sick. Then he heads home, but the hospital calls: The shot officer is awake. Judd heads over, but he never makes it: Spikes across a darkened road take out his tire.

Angela and Cal are having hushed sex in a closet at home when the phone rings. The caller instructs her to meet him, and “I know who you are, so don’t wear no goddamn mask.” She arms Cal and tells him to shoot anyone who isn’t her — his simple “OK” makes me wonder at the tragedy they’ve seen — then she goes where directed, winding up by a large tree in a big field.

The old man in the wheelchair is there (hi, An Officer and a Gentleman‘s Louis Gossett Jr.!). So is Judd, who is hanging from the tree, dead. As Angela is taken aback in horror, we see that the old man has the same “Watch over this boy” paper that the child in the Black Wall Street flashback did.

TIES TO THE COMIC | During a newscast, we see a very quick clip of Doctor Manhattan on Mars as a building crumbles in spectacular fashion. In another scene, a newspaper headline proclaims “Veidt Officially Declared Dead” — a nod to the graphic novel’s Adrian Veidt, aka Ozymandias. A preview of a TV show seems to indicate that it’ll chronicle an earlier incarnation of superheroes like Mothman, Captain Metropolis and the original Silk Spectre and Nite Owl. And speaking of Nite Owl, doesn’t the hovercraft used in the cattle ranch raid look an awful lot like his?