Familiar faces abounded in Thursday’s Grey’s Anatomy. Not only did Jo and Bailey wheel into the hyperbaric chamber a patient that the former recognized from her time in a psychiatric facility, but Richard found himself noticing a flirtatious look on the lovely mug of his old pal, Gemma. (Honestly, it was impossible to miss!) At the same time, Mer affixed her tried-and-true “Ugh, this again!” expression as she was due in court for bailing on her community service in “It’s Raining Men” — not that she’d be making that date. Was anyone left smiling by the end of the hour? Maybe Ben when he learned that Miranda was expecting? Or if he learned that she was? Keep reading, and all will be revealed. 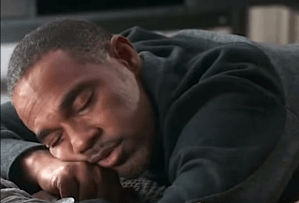 ‘BOUNDARIES… I DON’T SHARE FOOD’ | Early on in “Breathe Again,” Ben collapsed into bed after a hard night’s work and immediately started [see photo] — just as Bailey attempted to tell him that she was pregnant. As Richard was clocking out for the day — well, night — Gemma twisted his arm and convinced him to have breakfast with her. After Zola threw up on Mer’s shoe and complained of headaches, Mom rushed her to Grey Sloan and, specifically, to Tom for a CT; the little girl, who has spina bifada, needed a shunt revision, it turned out. And no, DeLuca — God, no! Mer would not be leaving her side, not even to go to court. Last but not least, Jo clocked unconscious patient Carly, who might have tried to commit suicide, as a former therapist of hers, and joined Bailey in the hyperbaric chamber in hopes of reviving her.

Once inside, Jo told Bailey that her former therapist had been 13 years sober and was crazy possessive about her almonds. Also, “I couldn’t stand her; she was the worst.” In a flashback to Jo’s time in the treatment facility, we saw that Carly was indeed a tough cookie. But she was also sharp — sharp enough, even, to get Jo to open up about her mom pulling away her hand from hers. Back in the chamber, Jo freaked. If Carly, the one person who could help her, could snap and try to take her life, what hope was there for her? Desperate, Jo began to list the things that she knew by heart — a calming technique that Carly had taught her. When that didn’t work, Bailey blurted out that she was “super pregnant,” and that actually helped. 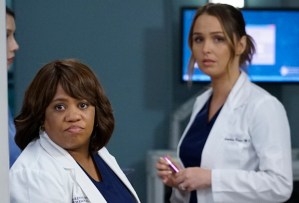 Afterwards, Jo reassured Bailey that it was OK to admit if she was scared. “What’s said in the hyperbaric chamber stays in the hyperbaric chamber.” What’s more, Jo told Bailey that she’d learned in treatment that she could be feeling happy, excited and terrified. Cut to: another treatment-facility flashback. In this one, Carly busted Jo trying to skip out after their session, and expressed her wish that her patient could move past her shame and feel the anger toward her mother that she was denying. Back in the chamber, Bailey chilled out by rattling off a list of things she knew by heart. Just then, all the monitors attached to Carly went off — she was going downhill fast. Luckily, Jo deduced that she was always eating almonds because she was diabetic — she needed glucose. Once it was administered, her condition began to improve. Whew.

In one more flashback, Jo hollered at Carly that she was in pain and hated that her therapist was treating it like a joke. Not that Carly was actually doing that at all. Jo still had trouble with anger — she didn’t want to be, like, say, Paul. But she only felt that way because she didn’t know what healthy anger looked like, Carly argued. To demonstrate, she threw stuff at the wall. See, Jo? Healthy anger is feeling the feeling but still controlling the behavior. At last, Jo was able to unleash some of her anger, even if her aim was so-so. Afterwards, Carly suggested that Jo’s body remembered what it had felt like to be abandoned by her mother as a newborn, and that feeling had come back to her when her mother had pulled away her hand at that diner. No wonder she’d had a big reaction — anyone would’ve, having been through what she had. Back in the present, Jo was relieved to discover that Carly hadn’t attempted to kill herself, and told the therapist that she couldn’t be her doctor. At last, Jo had learned boundaries, Carly said with a smile. 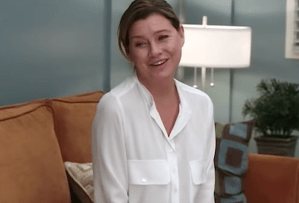 ‘YOU MAKE ME SOUND LIKE AN ASS’ | Though Tom was pissed about Mer’s article, he still reassured her that he’d take good care of Zola. Mer’s lawyer Nancy texted that if her client’s daughter was doing OK, she should really hit the courtroom, stat. But no way was that going to happen. And, she told Maggie and Amelia, she couldn’t believe that DeLuca had thought she would go! She also couldn’t believe that he’d volunteered to sit out the surgery to stay with Mer. “Cristina and I would have mocked him mercilessly” for offering to be a human Kleenex, Grey exclaimed. In other words, Maggie and Amelia pointed out, Mer was unhappy with DeLuca for suggesting that she go to court and also for trying to be there for her. Yeah, she did sound kind of like an ass — he was in the doghouse no matter what he did. Anyway, the surgery, which seemed to take all of five minutes, was a total success. 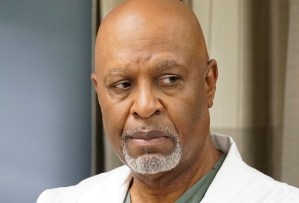 ‘LIFE IS TOO SHORT TO DEPRIVE OURSELVES’ | Over breakfast with Richard, Gemma thanked him — for his help in getting her the job at Pac-North, for getting a high heel out of her chest, the works. She was having trouble finding a sponsor, though. Not that she wanted to discuss AA. She moved over to his side of the table and casually asked how it worked with him and Catherine when she spent so much time out of town — and out of their bed. “It’s like the light’s gone out” since this last fight, he admitted, “and I don’t know how to turn it back on.” Shortly, Gemma was mentioning that the one thing better than having one man love her was… a rotation. To his credit, Richard removed her hand from his arm and made it plain that he loved his wife. Uh-huh, Gemma said. He loved Adele, too. When the going got rough, Richard always fell into either a bottle or another woman, and Gemma knew which one he could handle. Before he emphatically set her straight once more, she managed to plant a kiss on him (in which, again to his credit, he was neither a willing nor active participant).

As the episode drew to a close, Catherine returned home, noted that Richard looked tired and told him to go back to sleep. Right on cue, Gemma texted, saying she was sorry if she’d been out of line… and signed off with two heart emojis. When Ben met Bailey at Grey Sloan, she blurted out that they were expecting. “I kind of think this might be great,” she added. “Or am I wrong?” She wasn’t wrong. Though Ben’s expression was at first hard to read, he was elated, almost beyond words. At Jo and Alex’s place, she declined his offer to listen to her talk about her rough day. But ya know what she did want to do? Throw stuff. He joined in — and nearly killed a lamp in the process. (Now, great — I want to throw stuff, too.) Finally, after checking in on a fully-recovered Zola, Mer was on the hunt for Jell-O — which DeLuca had already obtained for her. (So much for him being just “sexy and fun.”) When Nancy showed up, she told her client that she’d squeezed “a small drop of humanity” from the judge. Make that miniscule — Mer wouldn’t be making up her missed work-crew time on work crew, she’d be making it up… behind bars!

So, what did you think of “Breathe Again”? Hit the comments.