We knew from last week’s Grey’s Anatomy that the article that Meredith was writing wasn’t going to win her any friends on the medical board — not with possible titles like “If You Die On Our Watch, We’ll Still Bankrupt Your Family.” But neither we nor she could have guessed at the way her story ideas would be twisted into “Hospital Hell at Grey Sloan Memorial.” Read on, and we’ll not only discuss just how hard Bailey hit the roof when she read the pieced-together piece, we’ll reveal who dared to challenge “chief of chiefs” Tom, and who was courted to jump ship from Grey Sloan to Pac-North. 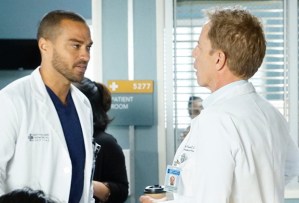 ‘BAILEY’S GOING TO KILL ME!’ | As “It’s Raining Men” began (and without even a riff of the Weather Girls’ classic to start us off), Mer’s sexy morning bedtime with DeLuca was interrupted by Amelia and Maggie, who revealed what the website to which she’d submitted her story ideas had done with them. To put it mildly, it wasn’t pretty. At Grey Sloan, Jackson informed Vic that the article included a list, which seemed to, as Helm put it, “torch” the hospital, and Owen informed Bailey that he was out until Tom’s restraining order was lifted. The first that the chief heard about Grey’s story was when a patient panicked and refused to be admitted. In the locker room, we learned that Dahlia had gotten a job in Michigan. So no transfer to Pac-North for her, I guess. Speaking of Pac-North, Alex learned that a psych patient had been found before he had wound up passing himself off as a doctor. So… yay? Back at Grey Sloan, Bailey didn’t want to hear from DeLuca that Mer had been as surprised as she was by what had been done with the information she provided the website. Instead, since a Dr. Kang had quit over the list, Bailey made Mer’s boyfriend chief resident. “You can fix what your girlfriend broke,” she hollered at him.

Meanwhile, Jackson balked at Tom’s idea to videotape his surgery on a child as a way of controlling the damage from Mer’s article, and Teddy treated a woman named Alicia who had a guy fall from a plane on top of her. As will happen? (Oh, that’s why it was raining men. Hallelujah!) As for Jackson’s case, it was going to involve fixing the little girl’s skull for free — which was news to him. “Just when I thought I couldn’t possibly like you less,” Jackson huffed to Koracick, who had basically bribed the parents into letting the surgery be used as a promotional tool. As the episode went on, Tom only disgusted Jackson more and more. And honestly, he was super creepy, trying to get the girl’s dad to redo an interview just because the lighting had been bad. Where’s the Koracick we’d come to know and love? When Jackson stood up to Tom, Koracick reminded Catherine’s son that Mom had made him the boss. Off a talk with Jo, in which she pointed out that Mer, having been canned, could just “do the right thing,” Jackson went to his young patient’s parents and asked that they bump Tom from the surgery and replace him with Amelia. “Your little girl means more to me than some good press,” he explained. And immediately, they agreed to have Amelia scrub in in place of Koracick. That Tom was gonna blow a gasket was, in Jackson’s estimation, “an added bonus.” When Koracick interrupted the surgery, Jackson reminded him that he was really his boss, not the other way around. In response, Tom marveled that Jackson had blown a ton of great press that could’ve helped put out the fire Mer had started, and had taken arrogance to a level that even he had never achieved. After the miraculous operation was completed, Schmitt suggested that Jackson had made a mistake by not letting it be filmed — sure, Jackson’s career was secure, but not everyone was that lucky. 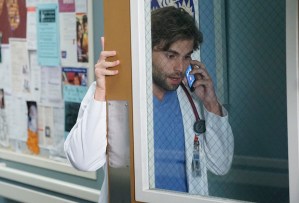 ‘THIS PLACE IS REALLY SHAPING UP’ | At Pac-North, Owen arrived with the patient who had refused treatment at Grey Sloan. When Alex heard that Hunt was taking some time off to stay at home with Leo and Allison, he leapt into action, offering to take his former colleague on a tour. Clearly, he saw a potential recruit. And it appeared that he might be making headway with Owen, too, when they were distracted by a scream. A patient was bleeding all over the place because no test had been performed to see if the blood he was given would coagulate. So much for Pac-North “shaping up.” While treating the bloody patient, Alex flat out asked Owen to come pitch in with him and Richard at Pac-North. Hunt didn’t have to put up with Koracick and his BS.

‘MEREDITH CALLS BOWEL RESECTIONS HER ME TIME’ | Joining Teddy, Link and Taryn in treating Alicia, Maggie impressed Vic. “She’s kind of a genius, isn’t she?” the firefighter asked Ben, pretty much rhetorically. Nearby, Link tended to Alicia’s boyfriend Josh, who appeared to be going into shock — he found himself holding the severed thumb of the guy who’d fallen from the sky. After Alicia died during surgery, Teddy wept that the whole world was broken, a fact made even worse by the fact that she now had a daughter. In other developments, when the medical website dragged its feet changing the headline on Mer’s article, she ticked off her litter-pickup supervisor Lisa by walking off the job to try to do her own damage control with Bailey. (“Move to Switzerland” was the advice that Cristina texted her pal.) When Mer arrived at Grey Sloan, Jo warned her that Bailey might ask her to take back her name from little Bailey — it was that bad. And the list wasn’t Miranda’s only concern. Though her stress level throughout the episode was through the roof, Maggie suspected that that wasn’t the reason Bailey was so warm — it might be, er, hormonal, Pierce suggested. Later, Bailey wept to Ben that she knew it was coming “someday.” But now that it was here, it was hard. “No one warns you about all the feelings,” she cried. Could he help? Just sit with her, she pleaded.

When Mer came face to face with Bailey, she explained that most of what was in the article wasn’t even directed at Grey Sloan. Miranda understood on one hand, but on the other, “the damage has been done.” As the hour drew to a close, Tom ran into Owen with Teddy at Grey Sloan, and informed Hunt that he was lifting the restraining order. It didn’t matter, though — Owen was going to work at Pac-North. After Josh broke down in front of Link over Alicia’s demise, he let Amelia act as his weighted blanket and confessed that he thought he was in love with her. “Love leads to divorce, to pain,” he said. “But I’m feeling it, I’m pretty sure, and it’s a feeling I like and I wanna name, because sometimes people fall out of the sky.” Her response: “OK.” Oh, Limelia, you two are the best. Finally, Mer filled in DeLuca on her talk with Bailey — and the fact that she now had to appear in court for walking off work crew. He argued that she should’ve worked within the system rather than do what she had — she didn’t need any more enemies at the moment. Yeah? Well, she didn’t need his lecturing, either, she huffed. And Maggie reported to Bailey that she was both perimenopausal… and pregnant! “Please tell me you’re not going to keep it a secret,” Pierce pleaded.

So, what did you think of “It’s Raining Men”? Link’s confession? Owen’s decision? Bailey’s pregnancy? Comment away.