Evil‘s David has been talking about exorcisms since the series’ premiere, so it’s fitting that the show’s first actual attempt at demon-extraction takes place tonight in the CBS drama’s Halloween episode (10/9c).

(And no, those sunglasses in the photo above are not part of some minimalist Blues Brothers pair’s costume.)

Ahead of the ceremonial casting out (and just before CBS handed Evil an early Season 2 renewal) we grilled series star Katja Herbers about the spooky hour, her character’s elusive husband and that bubbling attraction between Kristen and David (“He’s not unattractive,” she points out, laughing).

TVLINE | Before we get into the Halloween episode, can we talk about Kristen’s breakdown in the kitchen at the end of last week’s episode? What do you think pushed her over the edge?
I think it was just the weight of the whole episode, The grief for that mother, for the child, the weight was just too much and she was sitting there with her own healthy children watching TV and combing their hair, and it was just overwhelming. So I think she just had to let it out. That’s my perspective. It doesn’t necessarily have much to do with [Kristen’s] husband, although she’s carrying all the weight, and she does the parenting basically by herself. But I could relate to that moment when sometimes you just have to let it all out. The world can be a horrible place sometimes, and I think that’s what happened. There were a bunch of people writing to me on Twitter, going like, “Why did she cry?” I really got why she cried.

TVLINE| Why wouldn’t that woman cry? There’s so much going on.
Yeah. She’s got to cry sometime. Like, those parents murdered their child! 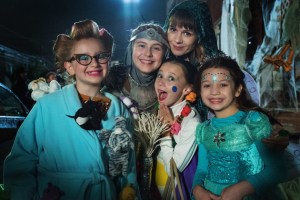 TVLINE | Moving on to the Halloween episode: This show is already very frightening on its own.
Thank you.

TVLINE | So did they up the ante for a Very Special Scary Episode, for lack of a better term?
They really did. It’s a very scary episode, but it’s also extremely cute because I have those four children who dress up in extremely cute Halloween outfits. [Laughs] it’s well balanced, but I think it might be our scariest episode yet.

TVLINE | Without revealing too much, it’s also an episode that shows Kristen and David having their first major disagreement on a case. What can you tell us about their relationship at this point in the season? Is she thinking about him a lot when she’s not working, if you know what I’m saying? 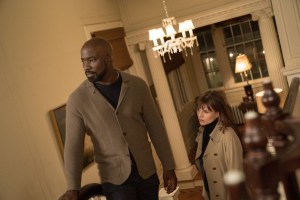 [Chuckles] I know what you’re saying. I do think so, for a myriad of reasons. He’s a very interesting guy. They like talking to each other. They’re both on different sides of the argument, and they enjoy listening to each other and having these debates. She’s alone; her husband’s been away for three months. I think Kristen is a bit of a flirt. I think she needs some attention, and like, maybe she would like a man sometimes. And he’s not unattractive… I mean, she’s also married, and [he’s] forbidden fruit, because he can’t do anything because he’s training to be a priest. It’s really interesting. It’s a good fantasy to have, I think.

TVLINE | Talk to me about Kristen’s husband, who has just been cast. Is he a major factor as we move through the season?
He is. He’s being played by [No Activity‘s] Patrick Brammall, a great Australian actor… I don’t want to spoil too much, but it’s not going to be what you expect when he comes back. Right now, everything’s sort of against him. Like, who leaves his wife with four children, alone, sends a check of — what does he send me, like, $500 or something? We also have a daughter who’s sick, doctor’s appointments coming up that can’t be good. But then, there must be something good about him, because they did have four children. [Laughs] So you’ll see. It’s going to be different from what you expect.