This week on The Affair, Helen and Whitney must decide where their allegiances lie after the #MeToo allegations against Noah go wide.

After Helen gets off the phone with Petra, Noah assures her that the Vanity Fair article is not “some sort of #MeToo thing,” despite the fact that it very much is a #MeToo thing. The story breaks the following morning, and everyone’s lives implode. Six women, three of whom wish to remain anonymous, have come forward to describe a pattern of behavior ranging from inappropriate comments to unwanted advances and emotional distress. In the immediate aftermath, Noah gets offered a buyout to remove his story-by credit from the now-renamed Descent movie; Helen loses her job at a high-end interior design firm; Trevor gets into a fistfight with Brooklyn; and Stacey stumbles upon an interview with Descent‘s script supervisor, who has disclosed that Noah took her bra and ran off on the night of the Halloween party. 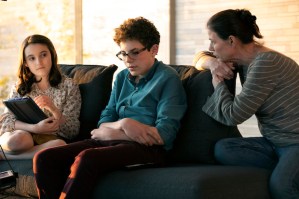 Helen and the kids convene at Sasha Mann’s house in the wake of a fast-spreading wildfire that has forced them to evacuate Brentwood. (Sierra and Eddie, meanwhile, go to stay with Priya.) Upon Helen’s arrival at the Malibu residence, they watch an Entertainment Tonight interview with another one of the accusers, Noah’s former student Audrey Nelson (again played by Parenthood alum Sarah Ramos), who says it’s always terrifying to speak out against powerful men, but that she’s been encouraged by the response to the article. Soon after, Helen starts to see the effect that the accusations are having on her kids, and agrees to make a statement to the press.

Later that night, Trevor and Stacey stumble upon a Busy Tonight interview — yes, a Busy Tonight interview! — with Eden. She tells Busy exactly what she told Noah, which is that she didn’t choose to come forward; a reporter called and asked her, point blank, if he harassed her. Busy then reads some, but not all, of Helen’s statement, and leaves out the part about how she empathizes with the women who have came forward. Eden uses this to her advantage and paints Helen as an out-of-touch housewife from a bygone era. A devastated Helen tells Trevor and Stacey that everything Eden just said is “bulls—t”; she threw herself at their dad throughout the Descent book tour. 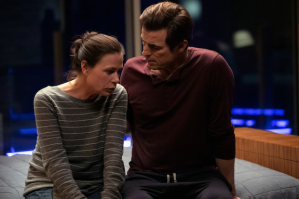 Helen then proceeds to Sasha’s bedroom. The movie star enters soon after and says that it’s wrong to try and protect her kids by lying about Eden and the myriad accusations leveled against their father. When he mentions that Eden was still traumatized the night they ran into her at Carolina Wineman’s house, something clicks for Helen. She gets up from the bed and asks Sasha how Petra knew to get in touch with Eden. It turns out that he told Petra about Noah’s former publicist, but insists that he’s not the bad guy here. He did it to protect the movie, which he calls “his baby.” “What about my actual babies?” Helen fumes. “They’re real people, and they have to live in the real world. And they’re going to be scarred for years because you want a writing credit for some idiotic movie?” She then receives a call from Noah, who can’t get a hold of Whitney. Helen tells Trevor and Stacey that they’re leaving, then borrows Sasha’s car to head out and look for her eldest daughter.

The second half of the episode focuses on Whitney, whose return flight to L.A. is delayed due to the wildfires. She’s at the airport when the Vanity Fair article launches, and she’s immediately inundated with texts and phone calls. She ignores all of Colin’s calls but picks up for Furkat, who invites her to come over to his apartment. There, he refers to Noah as a “prick.” “Sometimes with toxic people, you have to make a clean break,” he says. “You have to save yourself.” (Oh, the irony!) Right on cue, a model enters the room. Furkat says he’s done with her and to let herself out. Her eyes well up, and she goes. This prompts Whit to confront the sleazebag about their recent rendezvous. “You f—ked me in front of your rich friend to get him off,” she says, ever-so-bluntly. “You whored me out.” Furkat says that was “absolutely what you wanted,” then tells her that she should think long and hard about making accusations when her fiancé Colin is still in the dark about what happened that night. He says his friend Dashiel is opening a gallery, and he was considering letting Whitney curate an exhibit; now he’s not so sure. Whit then asks Furkat why he hit her in Paris. He denies it and says that she’s blown their “tiff” out of proportion. “For something so traumatic to transpire, there would have to be passion in the relationship,” he says, and he “never had those kinds of feelings” for Whitney. He then tells her that she should probably go, and refuses to drive her back to the airport.

Whitney takes an Uber Pool back to JFK and notices both of her seatmates looking down her shirt. She covers up, then purchases an oversized hoodie when she arrives at the airport. Coincidentally, she winds up on the same flight as Audrey, and decides to confront “the woman who is ruining her family’s life.” Audrey then explains herself to Whitney. She says she worshipped Noah, and he didn’t give her writing a chance; he took one look at her and decided he knew what her writing was worth before he’d read a thing she’d written. “Because I was writing about being young and being female, he assumed I had nothing interesting to say,” Audrey says. She dropped his class after the dean told her to grow a thicker skin. She needed the class for her major, so she dropped her major and quit writing for three years, at which point she entered a major depression.

“We give men like [Noah] such unbelievable rope,” Audrey says. “We will do anything — anything — to protect their egos when they continuously and carelessly destroy ours without consequence. Why does it have to be like that?” She admits that she wanted to sleep with Noah (which wasn’t at all evident in Season 3), and asks Whitney to look at why they’re really attracted to older men in these situations. “Is it them? Or their power? … Do you really want to f—k them, or do you want to be them?” she asks. Audrey apologizes for what this has done to Whitney’s family, but feels that it’s time for women to “tell our stories,” which are of greater importance than a man’s need to preserve the status quo. 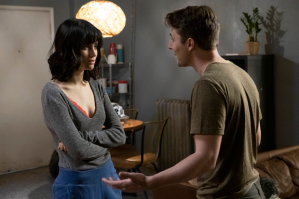 When Whitney returns home, she admits to Colin that she can’t go through with the wedding because she cheated on him with Furkat. She assumed that Colin was only with her for the green card anyway, but he makes clear to his fiancée that it’s quite the opposite. He says he hates this country and wants to return to Ireland, but he needs a green card because he wants to be with her. To prove how much he loves Whitney, he takes out a painting he’s been working on. It’s a painting of his soon-to-be wife, and the first time he has revealed his work to her. He apologizes for being so secretive, then asks Whitney not to give up on their relationship.

Almost as soon as Whitney and Colin kiss and make up, Noah comes a-knockin’. He tells his daughter that there’s no truth to the allegations, but she doesn’t want to talk to him right now. Soon after, Helen, Stacey and Trevor arrive. Helen sits them all down and says that all of this — the whole #MeToo controversy — is her fault. (Excuse me, what?!) She tells the family that Sasha wanted writing credit on Descent, so he took her comments about the nature of Noah and Eden’s relationship and fed them to Petra, who used them as the basis for her story. Whit rolls her eyes, then asks Colin to take the kids out for ice cream so she can talk to her parents in private. Helen continues to apologize to Noah, and her daughter urges her to stop. She says to Mom that she’s the problem — the fact that she could never let Noah go and the fact that she chose to forgive him for every terrible thing that he did to her. If Mom cut him loose, she says, perhaps she would’ve had an opportunity to acknowledge that Dad’s behavior was abnormal, and she wouldn’t have gone looking for a guy who hurt her. Then comes the ultimate bombshell: Whitney says that she believes the women because “he did it to me… that night at Rodney Callahan’s party.” She turns to her dad and acknowledges that awkward hot tub encounter that all of us have attempted to scrub from our collective memory. “When you got in the hot tub, you didn’t recognize me, but I saw the way you look at women — like they’re prey,” Whitney says. Before Helen can get an answer about what she’s talking about, Whitney runs into her bedroom and shuts the door.

What did you think of The Affair Season 5, Episode 9? Hit the comments with your reactions.