Five months after its cancellation, Busy Philipps‘ eponymous E! talk show was brought back to life in pretty much the last place you would expect: An episode of The Affair.

Busy Tonight‘s unlikely “revival” occurred in Sunday’s antepenultimate episode of the Showtime series when, during the drama’s storyline set in 2022, fictional publicist Eden Ellery (played by Brooke Lyons) is interviewed by “personal friend” Philipps about allegations of sexual misconduct she made against Noah Solloway (played by series star Dominic West).

Philipps shot The Affair cameo back in February, three months before E! pulled the plug on Busy Tonight. As a result, she admits to TVLine that the show’s cameo in The Affair caught her completely off guard.

“I literally forgot I did that,” Philipps confesses of her talk show’s exhumation, before adding, “Hilariously, the producers of The Affair had far more confidence in our show than the [former] executives at E!” 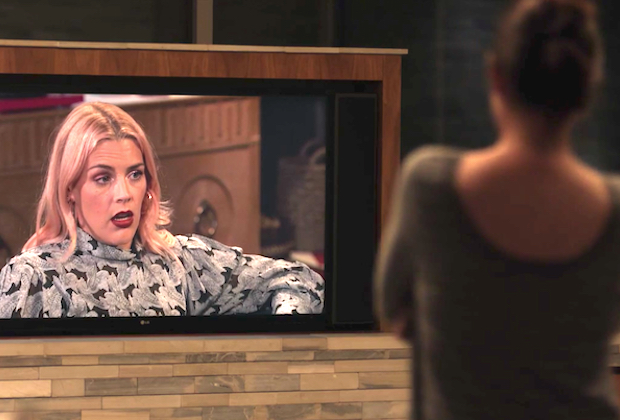 The idea for the crossover came from Affair creator Sarah Treem, who is a “good friend of Busy Tonight producer Eric Gurien,” Philipps explains, adding that Treem also “really loved our show.”

Might Busy Tonight‘s unorthodox rebirth be a sign that the show will get an actual new lease on life? “It just might be,” Philipps demurs, before adding that previously announced efforts to find Busy Tonight — or some version of it — a new home have not been tabled. Far from it.

“I think that what [fellow Busy Tonight EP] Caissie St. Onge and I are working on now will be not only a continuation but also an expansion of what we were doing with Busy Tonight,” she teases. “I’m very very excited to be able to share what it is soon.”