This week on The Affair, another brief glimpse into the future reveals the fate of Joshua Jackson’s Cole Lockhart. 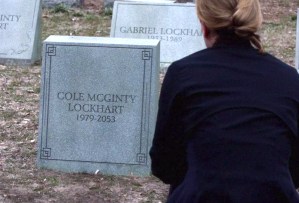 In the closing moments of Episode 4, Joanie takes Alison’s bike out for a ride to the Lockhart family burial site. Among those six feet under is her father, Cole, whose whereabouts (or lack thereof) had not been fully addressed before Sunday’s installment. In the scene, Joanie crouches down in the graveyard and says, “Hi, Dad.” We then cut to a closeup of Cole’s tombstone, which implies that her father lived to be 74 years old. His cause of death is not disclosed.

In the preceding minutes, Joanie wakes up in her childhood home. She jumpstarts the electricity, then begins tossing everything into garbage bags. Among the discarded items: all of those pictures of Joanie with Cole and Alison, and a toy chest that belonged to Gabriel.

* Part 1 focuses on Noah, who attempts to sabotage Helen and Sasha’s relationship while attending Sasha’s Halloween party. First, he goes to stash a duffel bag’s worth of sex toys (given to him by Margaret!) in Sasha’s bedroom, but can’t bring himself to do it. He eventually lets his jealousy get the best of him after he spots Sasha and Helen kissing. He takes script supervisor Erica out back to make out, then excuses himself with her bra in hand. He returns to Sasha’s bedroom to plant the garment under his pillow, only to be caught redhanded by the movie star and his ex-wife. 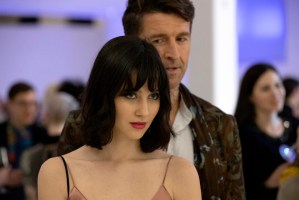 * Part 2 focuses on Whitney, and features one of the most disturbing sex scenes in The Affair‘s history. After her boss ropes her into attending an event hosted by none other than abusive ex-boyfriend Furkat (returning guest star Jonathan Cake), Whit winds up a part of his new art installation. It’s essentially a very public, very embarrassing apology for everyone in attendance to see. Then, at an afterparty, Furkat whisks his intoxicated ex away to have sex. Midway through, gallery collector Dashiell Boucicault (played by Quantico‘s Tate Ellington) enters and begins to pleasure himself. Whit is clearly uncomfortable and wants to stop, but Furkat overpowers her. “[Dashiell] likes to watch,” he says, and “he could give you a gallery.” The sex continues, but Whitney looks horrified. She eventually returns home and gets into bed with Colin, as a sense of shame and regret washes over her.

What did you think of The Affair Season 5, Episode 4? Were you at all surprised by Cole’s fate? Hit the comments with your reactions.