This week on The Affair, Noah and Sasha butt heads, as Helen gets close to the actor who portrays her ex-husband. Meanwhile, Cole and Alison (sort of) turn up in the future timeline. 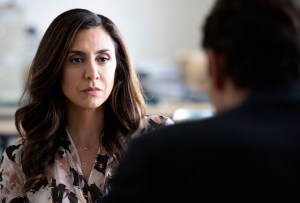 PART ONE: NOAH | At Compton Academy, Noah is being interviewed by Vanity Fair reporter Petra Ranes (The Blacklist‘s Mozhan Marnó). The interview comes ahead of the release of his latest book, an autobiography on Jack Hunter, which he wrote during his stint in prison. Petra intends to frame the piece as a redemption story, but Noah isn’t so sure that his journey has come full circle just yet.

After he has dinner with Whitney, Noah receives a call from Janelle. It’s been three months since they last spoke, and she feels bad for the way she left things. She wants a chance to explain herself in person. But first, Noah heads to the set of Descent, and is surprised to find Helen in video village. She says she’s there for a potential work opportunity, but doesn’t offer any further details. Meanwhile, Noah expresses concern about Whitney’s well-being. He reiterates what he told their daughter at dinner — that she looks tired and overworked, and shouldn’t rush into marriage. But Helen is not concerned. In fact, she’s pleased. It’s the first time that Whitney has acted like an adult. She then proceeds to fill Noah in on Whit’s wedding plans. She wants to get married at Bruce and Margaret’s home, but there’s one teensy, tiny, little problem: Bruce and Margaret are considering putting the house on the market. As far as Helen knows (or seems to know, from Noah’s perspective), her father made some inexplicably bad business decisions. Noah is about to tell his ex that Bruce exhibited signs of dementia at Vik’s funeral, but gets interrupted by Sasha, who would like to have a chat with the author.

During the ensuing conversation, Sasha expresses concern to Noah about shooting the entire movie from multiple perspectives. (Heh!) He also wants Noah to revisit the ending. “What if he went back to his wife?” Sasha ponders. Noah says he — or rather, Daniel — can’t just go back to Helen, err, Ellen. That’s the whole point. But Sasha isn’t convinced. He wants Noah to take another pass at the ending — and if Noah’s not willing to do that, he’ll take it upon himself to rewrite the ending. Sasha then excuses himself to prepare for a sex scene.

Shortly thereafter, Noah looks on from craft services and sees Helen exit a half-naked Sasha’s trailer. From the look on his face, Noah is not OK with this. He follows Helen back to set and tells her that he’s come up with an idea to save her parents’ house. “How about we move back East?” he says. “You came to L.A. for Vik; I came to L.A. for the kids. Neither of us really like it here. Why don’t you sell your house and use the money to buy your parents’ place?” But Helen refuses to disrupt the kids’ lives. Plus, she kinda likes it here now. The conversation is cut short when a P.A. wanders over and says they’re about to shoot an intimate scene; it’s a closed set, and only essential personnel are permitted to stick around. Noah offers Helen a ride home, but she says she’s staying. It’s then that Noah sees Sasha glance over at Helen. He loses his cool and enters the closed set, where both actors are exposed. He tells Sasha that his British accent slipped out during the last scene, just to get a rise out of him, and Sasha tells him to “f—k off.” 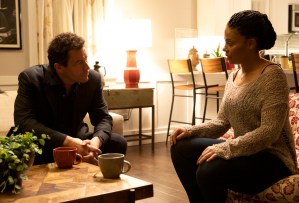 Noah proceeds to leave the lot, and heads over to Janelle’s with a bottle of wine. When he arrives, her campaign for school board is in full swing. Carl enters and greets Noah, then kisses Janelle before he takes off. Noah then follows Janelle into the kitchen, where she explains to him how important it is that her record as a tough administrator not be muddied by details about their relationship. That’s why she invited him over, to make sure he never reveals to the press that they slept together while she was principal. Noah gets upset, and insists that Janelle owes some sort of explanation for ignoring his calls for three months. She explains that she and Carl have “a history… a child… a whole life [together],” and she never meant to hurt him. When Noah points out that Janelle left Carl because he cheated on her, Janelle insists that’s all in the past. “We’re different people now,” she says. When she was young, she fell in love with Carl’s potential. Now that she’s lived a while, she’s learned to love him for who he actually is.

After he leaves Janelle’s home, Noah heads out to a karaoke bar, where Sasha has invited the entire crew following an especially long day on set. Sasha is on stage singing when Noah enters and approaches Helen. “Isn’t he funny? He’s a terrible singer,” she says. Noah asks if there’s something Helen wants to tell him, then Sasha blows Helen a kiss.

Later, Noah confronts Sasha in the bathroom. He says he’s not territorial, but that Helen’s his best friend and the mother of his children, and he feels the need to protect her. Sasha then argues that he’s not the one from whom Helen needs protecting, and it’s Noah that’s the problem. “You can’t see yourself and you never could,” he says. Noah lets Sasha exit to avoid a physical confrontation, then heads upstairs and gets wasted. At one point, he sees Sasha and Helen enjoying a drink together, then wanders up on stage and grabs the mic from a script supervisor. He sings Tom Petty’s “Listen to My Heart,” then blacks out. He eventually wakes up in a Mexican restaurant with Joel, having pulled an all-nighter to rework the script. He gets up and heads to the studio, only to have a P.A. tell him that he’s no longer permitted on set. He lashes out, then the scene comes to a close. 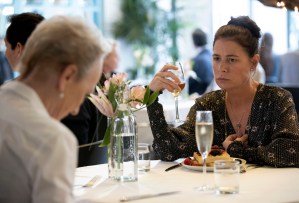 PART TWO: HELEN | Helen is out to lunch with Margaret. There, Margaret reveals that Bruce has dementia and has lost most, if not all of their money. He’s in the early stages of Alzheimer’s, and they can’t afford to keep paying a live-in nurse. Margaret wants Helen to come back East and help take care of him.

Mother and daughter return home to find Sierra and Eddie waiting for them. Vik’s baby momma says she hasn’t slept in two days, and Eddie refuses to breastfeed. Helen sends Margaret out to get baby formula and tells Sierra get some sleep. She gives Eddie a bottle and acknowledges how much he already resembles his dad. Once she puts him down, she heads out to the living room. There, Trevor and Brooklyn are watching one of Sasha’s movies in hopes that Helen will spill on her recent visit with him. She tells the boys that she’s done with men for a while, then receives a call from none other than Sasha. He’s been thinking about what she said about his minimalist approach to home decor, and wants her to help him pick out some new furniture. And so, she heads to the set of Descent and meets with Sasha in his trailer. He wants her to be his interior designer so they can spend more time together, but Helen’s not sure why. She has a hard time believing that she’s his type. But before he gets a chance to respond, there’s a knock at the door. He’s needed back on set. Before he goes, he mentions that he’s treating everyone to karaoke and drinks after work, and she should come. She exits his trailer, then runs into Noah, who wants her to convince Whitney to call off her wedding to Colin. 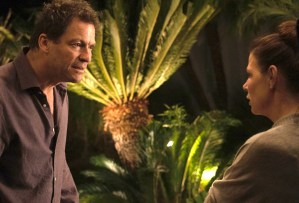 Later, at the karaoke bar, Helen receives a series of texts from Sierra, Margaret and Whitney. They all want something from her. “You don’t have to set yourself on fire to keep other people warm,” Sasha says. “You’re allowed to say no.” He then reveals to Helen that his significant loss, first teased in Episode 2, was his fiancée Lily. They came up together, but as his star rose, and hers did not, she turned to drugs and OD’d. Meanwhile, Noah, who’s in full-on jerk mode, interrupts the conversation to confront Sasha about the script rewrites. When the two of them go off to discuss the situation further, the actress who plays Ellen wanders over and encourages Helen to get her “revenge” on her “prick” of an ex-husband by sleeping with Sasha — and she eventually does. But before she calls him over for a late-night booty call, an inebriated Noah shows up on her doorstep and says that Sasha is using her. “He’s f—king you so he feels closer to me! Can’t you see how pathetic that is?” Noah asks. But the only pathetic thing Helen sees is her mess of an ex-husband. She tells him to call an Uber and shuts the door in his face.

The following morning, Helen tells Margaret that she’s not moving back to New York. She’ll help her parents out as best as she can, but she’s built a life for herself in Los Angeles and she’s not leaving. “What’s gotten into you?” Margaret asks. And like clockwork, Sasha exits Helen’s bedroom and enters the kitchen for a cup of coffee.

PART THREE: JOANIE | We spend all of four minutes in the future timeline this week. Joanie is at a bar. She is using a translucent tablet and scrolls through pictures of Paul and the girls. When the bartender asks if those are her kids, she lies and tells him that they’re just some refugees she met in Senegal. (Oof.) We then cut back and forth between Joanie at the bar, and Joanie back at Cole’s, as she looks at the belongings that her father left behind. 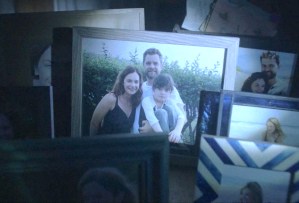 When Joanie asks the bartender how much she owes him, he grabs her arm and says it’s on the house. He hasn’t seen a face like hers out here in quite some time. This leads to a rather violent hookup, which Joanie instigates. Throughout the encounter, we get additional glimpses inside Cole’s house, as Joanie looks at childhood photos of herself with Cole and Alison. It’s the first time we’ve seen Joshua Jackson and Ruth Wilson’s M.I.A. characters in any capacity this season, and serves as a reminder that they’re sorely missed.

What did you think of The Affair Season 5, Episode 3? Hit the comments with your reactions.