Got five minutes? We’ll get you up to speed on the genre-TV universes you’ve always wanted to enter (but also kinda felt intimidated by). First up: HBO’s twisted superhero series Watchmen, which premieres Sunday at 9/8c.

THE SOURCE MATERIAL | A 1986-87 DC Comics’ comic series of the same name, written by Alan Moore, drawn by Dave Gibbons and colored by John Higgins.

THE GIST | In an alternate reality that’s very similar to our own, superheroes are outlawed. A few are given a pass to work with the government. Others have retired. Still others operate as vigilantes. They use varied measuring sticks to determine right vs. wrong, and the reader/viewer is left to decide who the good guys are.

DO I NEED TO HAVE SEEN THE MOVIE TO UNDERSTAND THE TV SHOW? | Nope. 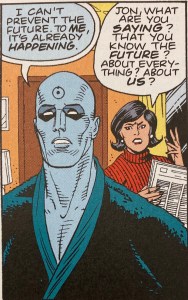 MAJOR PLAYERS FROM THE COMIC | The Comedian/Edward Blake, whose death at the start of the comic kicks off the story • Ozymandias/Adrian Veidt, an incredibly smart, incredibly physically fit specimen of manhood who has become quite the successful businessman • Nite Owl/Daniel Dreiberg, a gadgets guy (think Batman-ish) who is the second incarnation of the avian-inspired superhero • Rorschach/Walter Joseph Kovacs, a vigilante whose name is reflective of his ever-shifting face mask • Doctor Manhattan, a blue-skinned (and often nude) former scientist who exists in multiple universes and, ironically, is the only hero with actual superpowers • Silk Spectre/Laurie Juspeczyk, daughter of the first Silk Spectre who has romantic ties to both Nite Owl and Doctor Manhattan

DO THEY APPEAR IN THE TV SHOW? | Yes, but maybe not in the way you might expect. While the story is set in the same universe as the comics, and many of the aforementioned crusaders are referenced (and possibly more than referenced) in the first few episodes, the action centers on Angela Abar (played by Southland‘s Regina King), a police detective in Tulsa, Okla. To keep terrorists from knowing their true identities, Angela and her fellow officers wear disguises: Hers, shown in the photo at the top of this post, is Sister Night. (And if this sounds like it could never tie in with the events of the comic books, fear not: We can happily assure you it does, and well.) 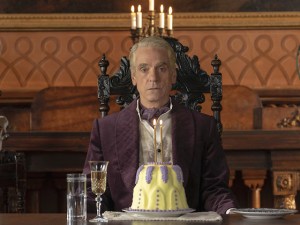 WHO ELSE WILL I RECOGNIZE IN THE TV SHOW? | The cast also includes Don Johnson (Miami Vice) as Tulsa police chief Judd Crawford; Jean Smart (Designing Women) as FBI Agent Laurie Blake; Tim Blake Nelson (O Brother, Where Art Thou?) as Angela’s colleague Det. Looking Glass; Yahya Abdul-Mateen II (The Handmaid’s Tale) as Angela’s husband, Cal; Tom Mison (Sleepy Hollow) as Mr. Phillips; and Jeremy Irons (The Borgias) as a character referred to as the lord of a country estate.

WHO’S IN CHARGE? | Damon Lindelof (Lost) is Watchmen‘s showrunner and executive producer, and he approached the project in a similar fashion to his other HBO series, The Leftovers: with the source material as a good jumping-off point. “I love everything about the original, full-stop,” he tells TVLine. “But I think that the biggest mistake that we could have made was literally trying to emulate everything, chapter and verse.”

WHERE CAN I WATCH THE TRAILER? | Right here!