Is the Prodigal Son not a party animal? What bomb will drop on The Resident? Is Supernatural having its own “Crisis”? Is Batwoman baddie batty? Read on for answers to those questions plus teases from other shows.

I will take anything you have on my new favorite fall show, Prodigal Son. —Annie
Upon receiving your query, Annie, showrunners Chris Fedak and Sam Sklaver relayed this to Inside Line: “In Monday’s episode, we’ll learn more about Dani’s past and Jessica’s charity work. We’ll also learn that Bright is not good on party drugs.”

Now that Riverdale has said goodbye to Fred, will we see more of Molly Ringwald as Archie’s mom Mary this season? —Natalia
Yes, Mary will be moving back to Riverdale to help Archie through this difficult time, executive producer Roberto Aguirre-Sacasa confirms. “We just did an episode I’m really proud of, a Thanksgiving episode that reminds us that it’s Archie’s first Thanksgiving without his father, and it’s kind of Archie and Mary shoulder-to-shoulder. There’s typical craziness that happens, but there’s really a true emotional core there as well.”

Do you have any news about Episode 350 of Grey’s Anatomy, who will write the episode or who will be the director? –Brenda
I can confirm that executive producer Meg Marinis wrote the milestone outing, and Miss Debbie Allen is the director. 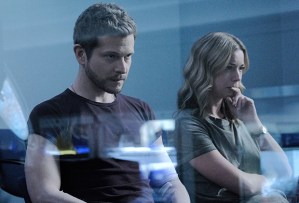 Would love some dirt on The Resident — what’s happening with Conrad this season? –Jen
Conrad’s investigation of Jessie’s death is “building toward an absolute bomb” later in the fall, executive producer Todd Harthan shares. “[Conrad] takes it all the way to the finish line,” and from the sound of it, not everyone at Chastain Park will survive that crucial storyline. “The audience will be surprised by the allies that help him along the way,” Harthan adds, “and they’ll be really surprised by how that bomb blows up and who gets sacrificed.”

Any more scoop on the Arrowverse’s “Crisis on Infinite Earths” crossover? –Derrick
The question of exactly which Lyla Michaels (ours, or another Earth’s) will be assisting The Monitor as Harbinger will be answered “pretty fast” — specifically, in Arrow’s third episode, says showrunner Beth Schwartz.

Can you please give me any scoop about NCIS: Los Angeles’ Kensi and Deeks? –Jennifer
As showrunner R. Scott Gemmill previously hinted, “We really kick back in an upcoming episode where Kensi has an incident occur, and it has the potential to change both their lives.” Well, the time for that episode is this Sunday, when Kensi and Deeks investigate the murder of a petty officer who is linked to a possible Eobola exposure aboard the USS Allegiance. Amid this workplace drama, Kensi will be reluctant to share some personal information with Deeks, feeling the time isn’t right.

Got any scoop on Supernatural? –RR
The show will kind of be having its own Crisis on Infinite Earths! “We will be jumping around to a couple of different worlds, some we visited before and some we haven’t,” co-showrunner Andrew Dabb reveals, “as we kind of get to the bottom of what Chuck’s been doing not just to our guys, but on a much larger multi-dimensional scale.” On a related note, the scruffy Dean spotted in this trailer is “a version of Dean not from our world, who we’ll be getting to know a little bit better in the upcoming episodes.”

For Chicago Fire, now that Brett is coming back, will they resume flirting between her and Casey? –David
“They’re starting to flirt with each other just a bit,” star Jesse Spencer says. “They’re testing the waters. I think both are gun-shy and neither wants to necessarily date in the firehouse ever again. So Casey’s looking outside the firehouse a lot. But she’s there, and I think she understands him.” Adds Annie Ilonzeh, who plays medic Emily Foster: “As an onlooker and [Brett’s] partner, I see a lot of flirtiness going on. There’s a bit of, I would say, tension, if not sexual. I don’t know if they’re aware yet. But I think it’s interesting and it’s really, really cute. They’re both so charming together.”

On The Flash, who is being cast as Sue Dearborn? –Aleana
There is no casting to report just yet, seeing as the introduction of Ralph’s comic-book love interest was just being broken when we saw showrunner Eric Wallace earlier this month. As for when she shows up, that “is a huge spoiler,” Wallace said, before adding: “There’s two answers to that : Sue Dearborn will appear in the back half [but] I would read into that when I say there are two answers to that question. Sometimes what you see isn’t what you see. “ 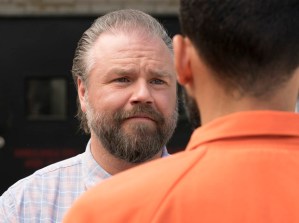 Will we get to see more of the New Amsterdam doctors’ backgrounds and home life? –Malasha
You’ll definitely get more of Iggy’s home life, especially as he continues to pursue adoption — even though his husband is not supportive of the idea. “This season is really going to explore why Iggy feels the need to keep expanding his family,” showrunner David Schulner previews. “We’re going to get into Iggy and his issues, as much as Iggy gets into his patients’ issues. We’re really going to find out what makes Iggy tick, and is it healthy to keep helping people the way that he does?”

Will Who Do You Think You Are? be returning? –Sharon
It will be returning, now back on NBC, though no premiere date has been set.

Anything about Batwoman‘s main villain, Alice? –Reeves
In this Sunday’s cold open, we’ll learn that Alice is haunted a bit by her own past. We’ll also see the villainess take her biggest swing yet at Daddy Dearest, as well as offer some commentary on twin sister Kate’s updated Batsuit. Any guesses on who will first utter the name of Gotham’s new vigilante?

Any news on when Condor will return? –Luis
A premiere date for Season 2 of the Audience Network drama has yet to be set, but it’s looking like it will be in early 2020.

Any hopes of a romantic reunion for Chicago P.D.’s Burgess and Ruzek? –Emily
As you saw in this week’s crossover, something is definitely happening between the exes, but whether that means they’re back together remains to be seen. Meanwhile, “Burgess has some interesting things happening that affect her ‘world view,’ so to speak, and make her question whether or not being a cop or being part of Intelligence is the right thing for her,” showrunner Rick Eid told TVLine ahead of this season. “Some pretty major personal things happen with her.”

Will we meet Hailey Upton’s brothers on Chicago P.D. this season? -Carlynn
“Never say never, but it’s not something I [have] thought about,” showrunner Rick Eid admits. Speaking of Upton, her relationship with Halstead “will continue to evolve,” Eid says. “They have real feelings for each other, and we’ll see that explored throughout the season.” 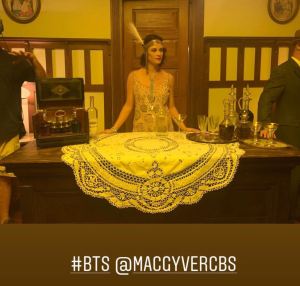 Is CBS planning on a crossover for Magnum and Hawaii Five-0 this season? –Andrew
I already reported on the latest plans, so I will instead hijack this Q to drop this super-cryptic bit of exclusive casting scoop: Scottie Thompson, most recently of 12 Monkeys and NCIS, has booked a role on one of Peter M. Lenkov’s three CBS reboots — Hawaii Five-0, MacGyver or Magnum P.I. — but her role is so spoilery, I cannot say any more. (UPDATE: Thompson has since offered up one piece of the puzzle (see photo) — while perhaps raising new questions.)