The Lenkoverse is back on track for another two-show team-up.

Though a full-on crossover between CBS’ Hawaii Five-0 and Magnum P.I. did not come to fruition during the latter’s freshman run, Peter M. Lenkov — the showrunner for both of the Aloha State-based procedurals — told TVLine as part of our Fall Preview Q&A that he is resolved to making it happen this TV season, and “sooner rather than later.”

When last we spoke, Lenkov said that the writers rooms had just begun bandying about ideas. Now, weeks later, the prolific producer has passed along this update: “We have narrowed down a story.”

Lenkov’s Five-0 reboot previously has crossed over with CBS’ NCIS: Los Angeles (not a show he runs) and, more recently, his own MacGyver reboot (in a singular March 2017 episode that saw Chin and Kono giving Mac & Co. an assist). Now, if Lenkov has his druthers, a two-part crossover between Five-0 (entering Season 10) and Magnum — airing back-to-back on Fridays this fall, with MacGyver on hold for midseason—will take place. 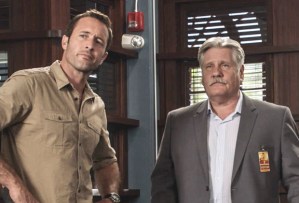 But until then, watch for some micro-crossovers. For example, Five-0‘s Kamekona (played by Taylor Willy), Duke (Dennis Chun) and Noelani (Kimee Balmilero) are all set to pay additional visits to Magnum, as they did last season. New to the crossover mix, meanwhile, are Five-0‘s Shawn Mokuahi Garnett (whose Flippa will make his Magnum debut) and guest star William Forsythe, who will reprise his Five-0 role of P.I. Harry Brown in an early November episode of the sophomore drama.

Are you ready to say aloha to a proper Five-0/Magnum meet-up?