In the episode’s final moments, the big bird removed his bandanna’d head to reveal that he was Dr. Drew Pinsky, known for shows like Loveline and Celebrity Rehab with Dr. Drew. (Read a full recap of the episode here.)

TVLine got a few minutes on the phone with the famous physician, and since he didn’t get much change to explain his character’s clues during the broadcast, we had him walk (fly?) us through a few of them.

TVLINE | The mentions of a health scare and the loss of a parent are terrible, and also easily Googleable clues. (Editor’s note: Pinsky had a run-in with prostate cancer in 2013; his mother, Helene, died in 2017.) But in your set-up package, there was a radio tuned to what I thought was 107 — but it was really 106.7, which is KROQ’s channel in Los Angeles, right?
Exactly. That was a major clue if you picked that up.

TVLINE | Let’s go back there for a second: Back in the days when you were just starting out on KROQ, did you ever think your life would bring you to a gig like this?
Are you kidding me? I thought I was doing good back then. It was 1983. I was wanting to educate young people about something we were just starting to call AIDS. And no one was talking to young people about it. I thought I was doing community service. I did it for one night a week for 10 years for free. It was fun, it was interesting, it was creative. I met the kids where they were and I got to talk to them about all kinds of things no one was talking to them about at the time. There’s never been a blueprint. I’ve never understood where I was going or what was next, least of all would I ever contemplate something like this. 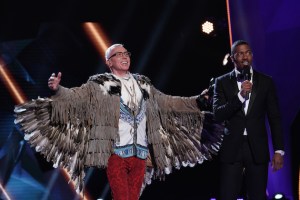 TVLINE | In the preseason special, there was a clue about an eagle’s body temperature, which the Internet tells me is 106 degrees. Did that number being close to KROQ’s factor in to your being the eagle?
It’s a little less scientific than you might imagine. Some of your early meetings with the producers, they want to talk about options of what you might be, your character. Essentially, they give you choices. But they ask you to think about it before you get there. I sing National Anthems at Lakers and Kings games, Dodger games, stuff like that. I thought, “You know, I can pull that off. It might be interesting if I were a bald eagle and I could sing some anthems or maybe even some Sinatra stuff. It would be kind of interesting.” And before I said anything, they said, “We think you should be the Eagle.” I said, “Perfect. That’s what I want to be.”

So I learned about 10 or 15 songs, none of which were exactly right, but we were playing with them. I discovered I had a vocal chord injury, I had to get all this treatment. I was supposed to get laser. Oh yeah, it was a mess. One of the reasons I wanted to do a singing show is I’m losing my voice as I get older. I thought, if I’m gonna ever do this publicly, I’d better get on with it! [Laughs] So I said, “Put me on that show.” By the way, I’ve known [judges] Ken [Jeong] and Jenny [McCarthy] for ever and I thought that would be funny, or fun, at least…. Anyway, I’m learning all these songs, and I go for a fitting maybe three weeks before the show, and I go, “Oh no. This is a rock character. I’ve gotta go completely rock with this character.” So I came back to the vocal coaches and I said, “We’ve got to start completely over.” So we landed on Meatloaf, and the next song was going to be Def Leppard. We were going full rock.

TVLINE | Please tell me it was going to be “Pour Some Sugar on Me.”
Yeah. It absolutely was. 100 percent. And we were going full-on rock with it, and that’s not something I’m comfortable with, know how to do or even know how to sing, so it was quite a stretch for me.

TVLINE | There was a Hong Kong sign in the back of the video package: Clue or red herring?
Must’ve been a red herring. Didn’t even notice it.

TVLINE | One of the clues was, “Like an eagle, I can see things miles away that other people cannot see.” Let’s go deep on that one, Dr. Drew.
Yes. That was a good one! People always come to me for my insight on things that I see, [based on] my experience, that other people don’t know. I thought that was a pretty good clue.

TVLINE | Jenny was taken aback when you took off your mask — she’d guessed your Loveline co-host Adam Carolla, but not you. What did you guys talk about afterwards?
We can’t. You don’t talk to anybody ont his show. You’re allowed zero contact with anyone.

TVLINE | Even after the unmasking?
Yes. The only conversation you can have with them is on the stage. I was on her show two weeks later, on her radio show, and we couldn’t discuss it. ‘Cause we can’t talk about it in front of anybody. You can’t even acknowledge it! I’m dying to go back and talk to them. Now, I can talk. I’m ready.

TVLINE | Before I let you go: In your professional opinion, after seeing the performances of the other contestants, is there anyone who’s a psychological or medical red flag that we should keep an eye on?
You mean people that are in trouble in the cast?