If you use the term “celebrity” as loosely as The Masked Singer seems to, there are roughly three zillion people who could be underneath the Season 2 competitors’ masks. And yet I already find myself doubling a couple of my guesses about the players’ identities, even though we’re only three episodes into this go-around.

As you move through this week’s recap, you’ll see what I mean. In my defense, the judges’ panel — Nicole Scherzinger, Jenny McCarthy Wahlberg, Robin Thicke and Ken Jeong — threw out some truly terrible ideas during the hour. (Guys, guys… it’s NOT Jamie Foxx!)

Read on for the highlights of Episode 3. 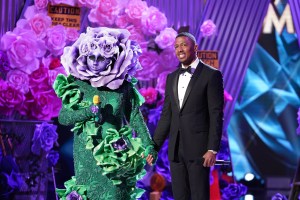 FLOWER VS EAGLE | Flower’s singing voice was souful and a little raspy, and the minute she started her fantastic performance of Dolly Parton’s “9 to 5,” I was pretty sure I knew who she was (though those soulless, empty eyes still frighten me). Clues from her video package include: hints about cooking, clothing and crafts, an honorary doctorate certificate on the wall, and a mention of “vision of love” — the last one, I’m pretty sure, was a red herring. (My guess: Patti LaBelle) Remember how I had a pretty good idea of Flower just a minute ago? I had the exact opposite for Eagle, whose clue package indicated that he’s had a health scare and recently lost a parent. He also mentioned that he spends “so much time listening to other people’s stories,” and there was a visual of a radio tuned to 107 FM. He sang “I’d Do Anything for Love (But I Won’t Do That)” by Meatloaf which proved he wasn’t a singer but didn’t shed light on much of anything else. (My guess: Howard Stern.) Winner: Flower! 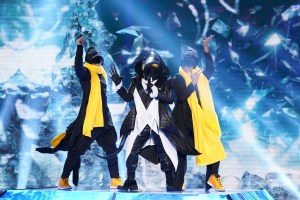 PENGUIN VS FOX | Penguin’s set-up package was all about a lifetime of being told she wasn’t good enough or pretty enough, and how her career was “over.” And she’s very short, and this is a reality series, so how could it not be Kathy Griffin? But then Penguin performed “Meet Me in the Middle” by Zedd, Maren Morris and Grey… and that guess went in the garbage bin. “Everything is not as black and white as it seems,” she said a couple of times during the evening, which then made me think maybe… (My guess: Raven’s Home‘s Raven-Symone. And yes, I know that we’ve also said that Black Widow is Raven-Symone.) Fox has “definitely done my best work at night” and seemed to name-check Neil Patrick Harris and Robin Williams when he said he’s worked with everyone “from Doogie to Doubtfire.” There were also a lot of comic-book references in his clip roll. He sang “This Love” by Maroon 5, and sang it well — his overall smoothness, along with his ease with grooving in front of a large crowd and the way he ended his performance, reminded me of… (My guess: Whose Line Is It Anyway? alum Wayne Brady. And yes, I know that we’ve also said Brady could be Thingamajig.) Winner: Fox!

THE UNMASKING | Eagle lost his smackdown against Penguin and was revealed to be Loveline‘s Dr. Drew Pinsky — and McCarthy’s old co-worker. (Her shock at seeing him under the big bird’s head causes McCarthy to gape in shock, especially given that she’d guessed her other Loveline co-star, Adam Carolla!) (Go here for a post-mortem Q&A with Pinsky, including his thoughts on which competitor is “in trouble.”)