Legacies returned for its sophomore season on Thursday, dropping viewers into a strange new world where Hope Mikaelson simply doesn’t exist. (You can always tell that something is amiss when Alaric grows a beard. Need I remind you of last season’s jinni fiasco?)

In an extremely abbreviated nutshell, here’s how the residents of Mystic Falls spent their summer vacation: Landon divided his time between caring for a still-wolfy Rafael (movie nights in the woods!) and falling in love with Josie, who finally got her newly bearded father to reveal the secrets of the ascendant; MG visited Kaleb’s family, crushing hard on his “off-limits!” sister; and Lizzie saw Caroline in Europe, where she balanced self-improvement with a healthy admiration of the locals.

And then there’s Hope, who managed to screw over Clarke and escape from Malivore just in time to see her boyfriend locking lips with another. After shedding a few well-deserved tears, Hope concluded that Landon might actually have found happiness with Josie. But just as she was prepared to get the hell out of Mystic Falls, along came a big, ugly monster-of-the-week to keep her exactly where she belongs.

Below, executive producer Julie Plec breaks down some of the premiere’s biggest moments, teasing a season’s worth of heartbreak still to come:

TVLINE | Let’s start at the end. I know you can’t tell me, but I’m asking anyway: Who or what was that spooky robed figure pulling Clarke out of Malivore?
The mystery of what this thing is, what it wants and what it’s doing is very slowly revealed over the next few episodes, then suddenly all at once when we hit midseason.

TVLINE | I’ve always operated under the assumption that Clarke is bad news. How genuine was his big speech about not being evil, and just wanting to escape his father?
I think he was being 100-percent genuine. What he’s pissed about is that he was open and vulnerable with Hope, and then she exploited that and left him to suffer in the very place he wants to be the least. He thought they’d built a little bit of a simpatico thing, only to be abandoned. So now he’s just pissed.

TVLINE | I did enjoy watching Hope and Clarke work together, albeit briefly. They gave me major Bonnie-and-Kai vibes from Season 6 of The Vampire Diaries.
Oh, yes. Those are always fun write, when the two people you think wouldn’t be be able to stand each other are stuck together. I call it the broken elevator storyline. Two people stuck in a situation they can’t get out of. 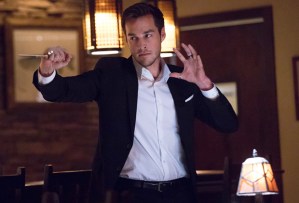 TVLINE | Speaking of Kai, it was surreal hearing him referred to by Josie as her uncle. I assume this isn’t the last we’ll hear about him.
It’s definitely not the last we’ve heard of him. We’ll keep laying little Kai Parker Easter eggs, because he is a massive part of the twins’ backstory and mythology, which is something we plan on telling stories from for the entire series. While I know we’ll never be able to get Chris Wood back for an entire series, it’s certainly fun to keep him alive in the hopes that we’ll get to see him in small doses over the course of the run of the show.

TVLINE | In the meantime, we’re seeing Freya in a few weeks! Why is this the perfect time to bring her back into the fold?
Riley [Voelkel] was always the one that was so happy to be anywhere and do anything and help anybody out. Even in this case, she was willing to go from shooting Roswell to shooting Legacies all in the same week — while also having just finished a series regular role of her own on a new show. It felt great to have her back in the family, and it’s great for the story. For poor Hope, who’s now been forgotten by anyone who’s ever loved her, to have access to a family member at this crucial time would be a really great thing.

TVLINE | Yeah, I feel like Hope is a little directionless at the moment. Where does she go from here?
The first decision she has to make is: Should people remember her, or should she just escape and get on with her life and leave everybody to what she believes is their happiness? That’s what she struggles with for the first bunch of episodes. She thinks that if people seem happier without her, maybe she’s the problem, and maybe they’re better off if she’s not there at all.

TVLINE | Well, she wouldn’t be a Mikaelson without thinking she’s a burden on everyone.
[Laughs] I know, what a martyr.

TVLINE | I’ll admit, my heart broke for her when she saw Landon and Josie kiss. What was the thinking behind putting them together? Was it that they’re both drawn to Hope, so with her out of the picture, they’re drawn to each other?
Yes, but they’re also two people who have lived their lives for others for a very long time. Landon never had anyone to take care of him, which is why he always felt the need to care for Rafael and to protect himself. And Josie is such a protector of everyone. They’re the two people left at the school for the summer, which is another stranded-on-a-desert-island story. It brings the most unlikely of people together.

TVLINE | While I’m glad Hope didn’t end up getting on that bus, I’m a little worried about the big, scary thing that knocked it over.
That was a very, very tall actor on even taller stilts. That was our Shrek costume. He is, in fact, the star of Episode 2.

TVLINE | OK, now let’s talk about the star of this episode: Alaric’s beard. Is that thing sticking around?
It’s not going anywhere anytime soon. It’s not permanent, but I like it a lot, and so does Matt [Davis]. Hopefully, he’ll someday return to his old life and his old look. But in the meantime, it’s a good look on him.

TVLINE | And that was Sheriff Mac sitting with him at the bar?
That is the new sheriff, yes, that was our first look at her.

TVLINE | I guess he’s found a new drinking buddy to replace Damon. What’s the dynamic between those two?
They have an interesting dynamic. He’s a man of secrets and she’s the town sheriff, so I think there’s always going be some conflict there. We also know he’s been unlucky in love, so as we learn more about her backstory, I think there might be a friendship there that can bloom between them.

TVLINE | Lastly, I love that Kaleb is promising to help MG win Lizzie this semester. How successful will they be?
[Laughs] It depends on your definition of success. I think MG’s ultimate success will either be to finally have his love reciprocated, or to realize that he’s better than Lizzie and doesn’t need that love reciprocated.

Your thoughts on Legacies‘ season opener? Grade the premiere below, then drop a comment with your full review.