Los Angeles remained a waterlogged hellscape on Monday’s 9-1-1, which wrapped up the Fox procedural’s multi-part tsunami saga — even if the effects of this disaster will likely be felt for weeks to come.

The episode began, as foreseen in TVLine’s exclusive sneak peek, with Buck discovering Christopher’s glasses amidst the watery wreckage. Like most of our readers, he immediately assumed the worst, especially after a kid he thought was Christopher turned out to just be some girl. (Toss her back in the water, I say!) That’s when Buck got his first bit of hope: a friendly neighborhood surfer said he saw someone matching Christopher’s description heading towards the Cupcakery with a group of people. He even took an extra moment to explain that it’s called the Cupcakery because it’s a cupcake bakery, which was very helpful. I mean, it’s not like there was a tsunami pressing Buck for time or anything.

Buck’s journey took him to the hospital that Maddie and Chimney opened last week (full circle!), but Christopher was nowhere to be found. In fact, this show was so determined to make us think he died, it subjected us to a scene of Buck sobbing to Eddie and apologizing for losing his son. That’s when it happened — a woman we briefly saw in the beginning of the episode showed up with Christopher in her arms, reuniting him with his dads. I mean, his dad. Singular. Just Eddie. (Even though the woman told Eddie, “He was looking for Buck.” Ouch.) 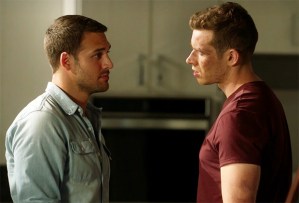 Buck remained very much in his usual funk the next morning, but a pep talk from Eddie about how there’s still no one he trusts more to protect his son was enough to inspire a half-smile. “I failed that kid more times than I can count, and I’m his father,” Eddie told him. (In other news, you can throw all the love interests you want at these two, but there’s no one Buck or Eddie will ever have more chemistry with than each other.)

Earlier in the episode…

Much of the earlier action took place back at the Santa Monica Pier, where Bobby, Eddie and newcomer Lena Bosco (played by Ronda Rousey) fought to rescue the people still trapped on the Ferris wheel. Among their charges were Max and Stacey, a lovely husband and wife who came to the pier to commemorate… their divorce. Taking Stacey back to the site of his proposal was all part of Max’s plan to win her back, only to discover that she also came prepared, handing him divorce papers to sign when they reached the top. “Just like our marriage, this ride is suddenly going nowhere,” Stacey noted, moments before the tsunami tore through the pier.

Max and Stacey managed to survive their day at the beach, even if their marriage didn’t. And they didn’t even wait until they got to the hospital to sign their divorce papers, either. She literally held Max’s hand — which was barely working due to a tsunami-related injury —  and helped him scribble his name on the dotted line. (I wish these two luck in all of their future relationships, but I also kind of feel like they deserve each other.)

Bobby & Co.’s next stop was an apartment complex whose residents were suffering from carbon monoxide poisoning, though the real story here is how Maddie and that girl with the drone from the season premiere teamed up to locate the survivors and prove everyone wrong. (“No resources,” you say? No problem for the Drone Whisperer!)

Meanwhile, Eddie and Lena were busy making heart eyes at each other (don’t tell Buck!) while some doctors treated her injuries. The universe gave them even more to bond over when Athena arrived at the hospital, having just amputated Lena’s captain’s arm with her own bare hands. Because, you know, the one thing this tsunami saga needed was yet another traumatic experience for a member of Athena’s family.

Your thoughts on the conclusion of 9-1-1‘s tsunami saga? Drop a comment with your thoughts — as well as your personal MVPs — below.